This article was written by students in a grade school class in Australia. 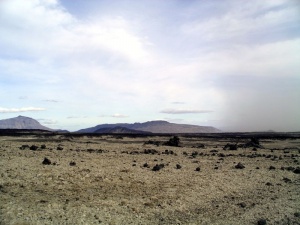 Aeolian sediment transport (on the right-hand side) in the Highlands of Iceland, at the bottom of Askja

Aeolian processes, in the study of geology and weather, pertain to wind activity and specifically to the wind's ability to shape the surface of the Earth. Winds may erode, transport, and deposit materials, and are effective agents in regions with sparse vegetation and a large supply of unconsolidated sediments.

Aeolian Transport is the first process of coastal dune formation and involves the movement and weathering of sand particles behind and parallel to the shoreline.

There are three main processes involved in Aeolian Transport: