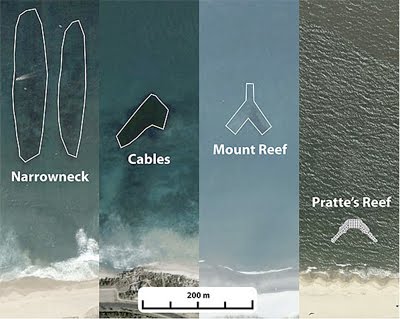 As the name implies, an artificial surfing reef (ASR) is an underwater man-made structure intended to create quality surf where there's otherwise none. Since they are based in the ocean, ASR's are different from the more confined artificial surfing waves or pools being developed in inland locations throughout the US. The perpetual promise of a permanent structure in the ocean that focuses and grooms swell has thus far proved largely empty, both because of the cost involved in designing, permitting and installing the ASR, and also due to the technical difficulty in trying the create a reef that consistently produces quality waves.

ASRs entered the surfing consciousness in the early 1960s when essays by people like oceanographer/North Shore pioneer Ricky Grigg first speculated about their potential benefits for surfers, fishermen and divers alike. Pouring over surf publications from the subsequent decades yields countless "what if?" pieces, some of which thought sinking rusted cars, retired barges or cement blocks might be the answer. During that period, some new waves were accidentally created by Army Corps of Engineers or other coastal development or construction projects, but nothing memorable via an ASR. In 1989, Patagonia's Yvon Chouinard, along with the Surfrider Foundation, announced a study on the pros and cons of building a reef off Emma Wood Beach in Ventura County, but that project has never seen the light of day.

Several ASRs have now been built, in Australia (3), New Zealand (2), England (1) and in the United States (1), but the results, in general, have been very unimpressive. However, that doesn't mean that efforts have stopped. In 2018, a new design for ASR's using a self-anchoring inflatable bubble was in development in Western Australia, and was slated to be installed as a prototype in January 2019, yet the install has yet to happen.

In 2000 the Surfrider Foundation constructed an artificial surfing reef (dubbed Pratte's Reef in honor of Surfrider co-founder Tom Pratte) in El Segundo, CA as mitigation for a lost surfing resource. Unfortunately this project did not improve surf quality, and by the fall of 2008 plans were initiated to remove the reef. Phase I of the reef removal process took place that fall and Phase II of the removal process took place during the fall of 2010. Read more about this here and here. Also see an *Early History of Pratte’s Reef (published in 1998).
Surfrider Foundation has developed a Policy on Artificial Surfing Reefs.

For a couple of articles that are slightly more positive on ASRs, see: