Carbon is one of the essential elements of life and one of the foundational elements of all life on Earth. Consequently, one of the most important resource cycles is the carbon cycle which transfers carbon between various carbon reservoirs. In order for the carbon cycle to function, there are numerous sources and sinks of carbon which absorb and release carbon at different rates and help regulate carbon concentrations around the globe. Reservoirs that emit more carbon than they absorb are net carbon sources and reservoirs that absorb more than they emit are net carbon sinks. However, due to the increase in carbon that has been emitted due to human activity, as well as human-caused land use change, this cycle has become unbalanced, and as such, artificial methods to assist the carbon cycle have become more common.

Carbon sources are any natural or artificial production site of carbon and/or any chemical compounds composed of carbon, such as carbon dioxide and methane. For example, the burning of fossil fuels, forest fires, animal respiration, and plant degradation are all sources of carbon. These sources are worldwide, though some may be larger producers than others.

Another increasingly prevalent source of carbon is plastics. Plastics, microplastics in particular, are not only produced from fossil fuels (therefore sourced from carbon themselves) but are large, artificial producers of carbon that are commonly not considered when calculating environmental carbon pollution. However, as plastic degrades it releases carbon into soils, water, and the atmosphere. While the impact that plastic-sourced carbon has not been completely quantified, recent research is slowly defining the scope of the carbon footprint of plastics.

Carbon sinks are natural or artificial reservoirs that absorb and store carbon through the process of carbon sequestration. Just as carbon sources are worldwide, so are carbon sinks, and understanding how they work and how they are changing is important in predicting the impacts of climate change. Examples of carbon sinks include photosynthesizing plants and plankton, and the ocean.

1. Biological sequestration refers to the storage of atmospheric carbon in vegetation, soils, wood, and aquatic ecosystems.

2. Geological sequestration refers to the process by which carbon and carbon dioxide are stored in geological formations. This process is foundational for the formation of fossil fuels and is used as a part of enhanced oil recovery.

3. Technological sequestration refers to the artificial processes in which carbon and carbon dioxide are trapped and stored. The Intergovernmental Panel on Climate Change (IPCC) has recommended that artificial methods of carbon sequestration are required to limit global warming to under 1.5ºC; with this recommendation and the increased focus on trapping CO2 due to its role in climate change, this is a quickly growing field. Presently there are three forms of technological sequestration: graphene production, direct air capture, and engineered molecules. Graphene production uses carbon as a raw material by pressurizing it into a new, compact form. Direct Air capture is similar to carbon filtering by capturing carbon and CO2 directly from the air; this is a highly energy intensive and expensive process and is currently not usable at large scales. Engineered molecules are used in another form of carbon filtering in which the manufactured molecules attract and interact only with carbon molecules, allowing for the carbon to be isolated and extracted from the air.

Furthermore, these sequestration processes and timescales are dependent on the size of the carbon sinks in which they are being absorbed into. For example, plants are generally smaller carbon sinks as they can store carbon within their structures or absorb CO2 through photosynthesis; but, once they reach the end of the lifecycle and die, they re-emit all absorbed carbon back into the system. The ocean, on the other hand, is a massive carbon sink that can absorb and re-emit carbon on short timescales, but also store carbon in the deep ocean for thousands of years. The storage potential of each carbon sink is important as it allows for the possibility of each sink to be utilized in the intentional sequestration of carbon, which will in turn (ideally) limit the atmospheric warming that we are experiencing today.

55% of the CO2 emitted into the atmosphere (naturally or artificially) is temporarily sequestered naturally by the environment. Of the carbon dioxide emissions produced from human activities, 25% of our emissions have historically been captured by forests, farms, and grasslands (when intact), while 30% has been absorbed by the upper layer of the ocean. However, 45% of the CO2 emitted into the atmosphere has stayed in the atmosphere. This extraneous 45% of emissions has been linked to climate change and our warming atmosphere. The IPCC released their recommendation that in order to limit global warming to 1.5ºC, paired with deep reductions in emissions, artificial methods of carbon sequestration are essential.

As such, the field of technological carbon sequestration has grown significantly, but due to the cost and limited scalability of current carbon sequestration programs, large scale progress has yet to be made. However, there has been success with natural and artificial carbon sequestration being utilized by carbon offset programs. Carbon offset programs are being designed and implemented to assist in the reduction of atmospheric greenhouse gases, most particularly carbon dioxide, through either a reduction of GHG emissions or an increase in carbon storage to compensate for emissions elsewhere that cannot or have not been reduced. 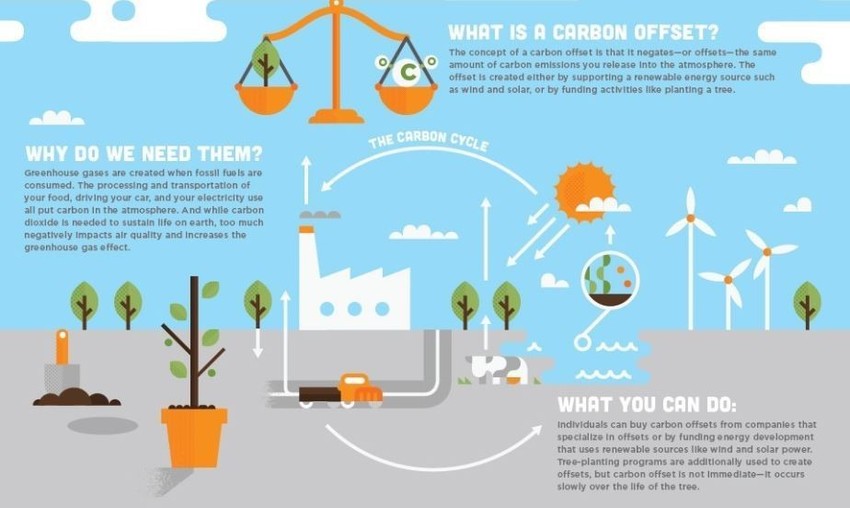 There has been progress in utilizing Earth’s natural biological sequestration abilities through the restoration and rehabilitation of various ecosystems on large and small scales. For example, programs for global coasts have focused on restoring important coastal carbon sinks in natural mangrove, sea grass, and salt marsh habitats to enhance the natural sequestration of ‘blue carbon', and smaller scale programs, such as Surfrider’s own Ocean Friendly Gardens program, encourages individuals to protect and cultivate healthy soils in their own backyards to increase carbon sequestration and storage. Programs such as these are just as essential as technological sequestration and offset programs for working towards carbon neutrality (the idea that there is a global net zero production and sequestration of carbon) and limiting global warming.