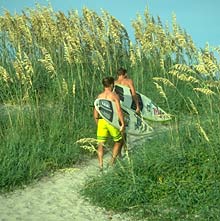 The second of the ten Surfrider Foundation principles reads:

Surfrider promotes the right of low-impact, free and open access to the world's waves and beaches for all people. Surfrider acts to preserve this right of access.

Maximize public access to and along the coast and maximize public recreational opportunities in the coastal zone consistent with sound resources, conservation principles and constitutionally protected rights of private property owners.

The implementation of a public coastal access program for the length of California's coastline, including maintaining and updating an access inventory, keeping records of easements and dedications, and expediting the opening of new accessways for public use.

Sounds great, right? We want access to the beach and surf and there's a state agency created expressly to give it to us. But, 25 years after the passage of the Coastal Act, although some victories have been gained, we still don't have access to the beach in many locations. How can this be? What went wrong?

The most inaccessible parts of the coast are typically either areas occupied by military reservations, private housing developments, or a single large landowner who prevents access. One of the most famous surfing areas formerly on a military reservation is Trestles. From the early days of surfing in Southern California until the early 1970s, surfers had to trespass on Camp Pendleton (and risk fines, board confiscation, and even potential jail time) to gain access to Trestles. The access problem was eliminated when the Marines deeded a large portion of coastal land on the ocean side of I-5 between San Clemente and Oceanside to the California State Park system. Surfing areas adjacent to other military reservations in the state remain off-limits, however.

In cases where there are one or more large coastal landowners, access is often difficult. A famous such area is "The Ranch" between Gaviota and Point Conception. Currently, access is only possible for residents and their guests, or by boat. In some coastal locations, surfers and other beach goers have established and used trails across private property for years without action by the property owner to restrict that access. In many such cases, courts have held that such long-term unimpeded access has created a de facto coastal access trail, and that the property owner (or a new owner) must allow that access to continue. Evidence (through personal accounts and photographs) of long-term (typically 5 years or more) beach access has been key to securing several coastal access trails.

That brings us to private housing developments and closely bunched houses along the coast. In California, the Coastal Commission has successfully created public access easements by requiring that an entity requesting a permit for coastal development or redevelopment provide an "Offer to Dedicate" (OTD). An OTD is an offer by a landowner to grant a public access easement across their property for future public recreational use. The OTDs that are perpendicular to the ocean are called vertical OTDs and those that run parallel to the shore are called lateral OTDs. Typically, a vertical OTD is 10 feet wide, while a lateral OTD is at least 25 feet wide or the width of the beach. OTDs are only offers of easements, however. Several steps must then be taken to turn the easement into a useable public accessway. If these steps are not taken within a proscribed period (generally 21 years), the opportunity to use the easement goes away, forever.

The most important action that needs to happen is that the OTD must be accepted by a government agency (city, county, state) or a nonprofit organization. Potential state agencies include the State Lands Commission, the California Department of Parks and Recreation, the Coastal Conservancy, and the Santa Monica Mountains Conservancy. An example of a nonprofit group that has accepted OTDs is the Mendocino Land Trust. The accepting agency or organization must assume responsibility for liability and maintenance of the access segment. The accepting agency is responsible for managing the easement area to provide safe public access as well as to protect property rights. Once the OTD is accepted, the accepting agency obtains title to the property, improvements (fences, stairs, etc.) are installed, and the easement opens for public use.. OTDs (whether accepted or not) are recorded at the local county recorder's office. The Coastal Commission also maintains a statewide list of OTDs.

Non-acceptence of OTDs is a big problem. According to California Coastal Commission records, only 464 out of 1288 OTDs had been accepted as of March 1999. Twelve OTDs had already expired and are likely lost. The most critical OTDs are vertical OTDs, which number about 150 throughout the state. Over half of these will expire between now and 2017 if they are not accepted. The critical unaccepted vertical OTDs in Southern California include 8 in Malibu, 3 in Newport Beach, 1 in Laguna Beach, 3 in San Clemente, 1 in Carlsbad, and 1 in Del Mar.

What can you do to make sure OTDs are not lost? First, find out where the unaccepted OTDs are in your local area, especially the vertical OTDs. Then, pressure your city or county to accept the OTDs that are important to you or to the public in general. If a government agency won't accept the OTD, look for a non-profit group that might be willing to do it. Although Surfrider Foundation is not in the land management business, several land conservancy or land trust non-profits could potentially accept OTDs.

A final option to gain an accessway to the coast is for a city to require a property owner to directly dedicate land to the city as a condition for approving a building or development permit. Although the Coastal Commission has to use the cumbersome, lengthy OTD process, cities can require direct dedication of property for public coastal access as a permit condition. This is potentially a faster way to obtain beach access than through the Coastal Commissions OTD process.

An excellent report on the history of beach access in California and some present-day issues is Free the Beach! - Public Access, Equal Justice, and the California Coast by Robert García and Erica Flores Baltodano of the Center for Law in the Public Interest and Edward Mazzarella of Surfrider Foundation.

Also see the section on Beach Access in California from Surfrider Foundation's State of the Beach Report.


This article is part of a series on Beach Access looking at policies, laws, regulations and conditions which can affect the public's ability to access the coast.

For information about laws, policies and conditions impacting beach access in a specific state, please visit Surfrider's State of the Beach report to find the State Report for that state, and click on the "Beach Access" indicator link.