The following information on coral reefs and coral bleaching is adapted from NOAA National Ocean Service's website What is Coral Bleaching? 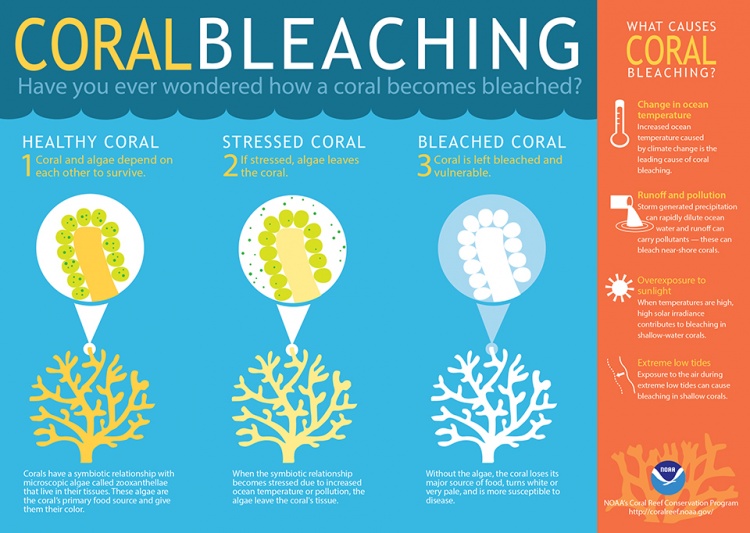 
Warmer water temperatures can result in coral bleaching. When water is too warm, corals will expel the algae (zooxanthellae) living in their tissues causing the coral to turn completely white. This is called coral bleaching. When a coral bleaches, it is not dead. Corals can survive a bleaching event, but they are under more stress and are subject to mortality.

In 2005, the U.S. lost half of its coral reefs in the Caribbean in one year due to a massive bleaching event. The warm waters centered around the northern Antilles near the Virgin Islands and Puerto Rico expanded southward. Comparison of satellite data from the previous 20 years confirmed that thermal stress from the 2005 event was greater than the previous 20 years combined.

In 2016, preliminary findings published by Australia's Great Barrier Reef Marine Park Authority surveys indicated that 22 percent of its coral died from a mass bleaching event in 2015.

From 2013 to 2017, the island of Guam lost over 30 percent of its coral reefs due to multiple bleaching events associated with rising sea temperatures, with certain areas on the East coast losing up to 60 percent of reefs. "It’s the largest known mass mortality of coral reefs on the U.S. territory to be recorded in the last five centuries."

Not all bleaching events are due to warm water. In January 2010, cold water temperatures in the Florida Keys caused a coral bleaching event that resulted in some coral death. Water temperatures dropped about 12 degrees Fahrenheit lower than the typical temperatures observed at this time of year. Researchers will evaluate if this cold-stress event will make corals more susceptible to disease in the same way that warmer waters impact corals.

The NOAA Coral Reef Watch program's satellite data provide current reef environmental conditions to quickly identify areas at risk for coral bleaching, where corals lose the symbiotic algae that give them their distinctive colors. Continuous monitoring of sea surface temperature at global scales provides researchers and stakeholders with tools to understand and better manage the complex interactions leading to coral bleaching. When bleaching conditions occur, these tools can be used to trigger bleaching response plans and support appropriate management decisions.

Five Things You Should Know About Coral Reefs