In coastal areas around the country, beach erosion has become a serious problem threatening public and private properties, recreational values and the economies of coastal communities. In many of these areas, beach sand supplies have been critically reduced by dams which impede natural processes that transport sediment from coastal watersheds to the shoreline. At the same time, many dams have been rendered obsolete by heavy siltation, structural defects and development of alternative water supplies. 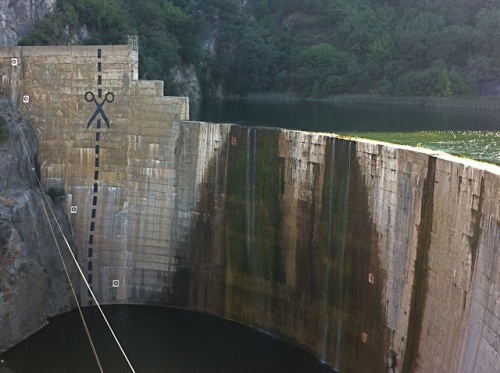 In such cases, Surfrider Foundation has advocated for the removal of the dams or completion of studies to evaluate the feasibility of dam removal. Surfrider's Board of Directors has passed a Resolution in Support of Removal of Dams in Coastal Watersheds. This resolution refers to efforts of Surfrider Foundation's Ventura County Chapter toward removal of the Matilija Dam and restoration of the Ventura River watershed. Read more on this on the website of the Matilija Coalition and here.

Elsewhere in Southern California, Surfrider's West LA/Malibu Chapter is participating in a feasibility study regarding the potential removal of Rindge Dam, another obsolete dam which has been blocking the transport of sediment to Malibu Creek and Surfrider Beach in Malibu for decades. Read more about the Rindge Dam and the sediment (and trash)-choked Malibu Creek watershed.

Read more on the Matilija Dam, Rindge Dam, and other dam removal projects from the California Coastal Conservancy. 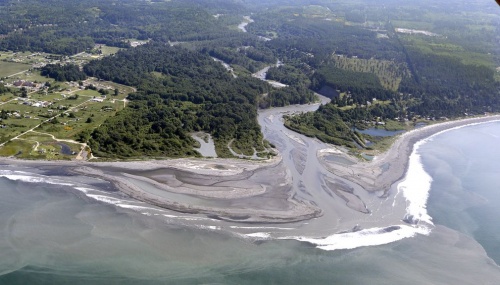 The Elwha River flows into the Strait of Juan de Fuca, carrying sediment once trapped behind dams. The gradual release has rebuilt riverbanks and created estuary habitat for Dungeness crabs, clams, and other species. Photograph by Elaine Thompson, Associated Press

Dam removal is not just being studied. In Washington, the Elwha Dam was removed in 2011-2012, and the beaches are growing at the mouth of the Elwha River. Surfrider Foundation activists and former Washington Field Coordinator Ian Miller (now coastal hazards specialist for Washington Sea Grant) advocated for removal of this dam. More from Ian on conditions at the river mouth (December 2012). Further up the river, removal of the Glines Canyon dam was completed in 2014. Here's another update from National Geographic from August 2014. And, there's some really good news that the fish are coming back to the Upper Elwha. Another update and a NY Times article from August 2015. The Seattle Times published another article with great photos and video clips showing changes along the river and discussing the improved ecosystem health in February 2016.

The San Clemente Dam (which is nowhere near San Clemente), is a 106-foot-tall concrete dam on the Carmel River in California that is being removed. During summer 2014, the river was rerouted around the accumulated sediment that has built up behind the dam and the process of taking down the dam began. Summer 2015 will see the dam's full removal and restoration of the 68-acre project site. The project is intended to address seismic and flood safety issues and help restore the overdrafted Carmel River closer to its natural state. An update can be found in this August 2015 op-ed by Representative Sam Farr that appeared in the Monterey Herald. Also see the project website.

The world premier of a new dam removal film DamNation was at the South by Southwest Music and Film Festival, March 7 - 16, 2014, in Austin, TX. Here's a synopsis of the film:

"This powerful film odyssey across America explores the sea change in our national attitude from pride in big dams as engineering wonders to the growing awareness that our own future is bound to the life and health of our rivers. Dam removal has moved beyond the fictional Monkey Wrench Gang to go mainstream. Where obsolete dams come down, rivers bound back to life, giving salmon and other wild fish the right of return to primeval spawning grounds, after decades without access. DamNation’s majestic cinematography and unexpected discoveries move through rivers and landscapes altered by dams, but also through a metamorphosis in values, from conquest of the natural world to knowing ourselves as part of nature."