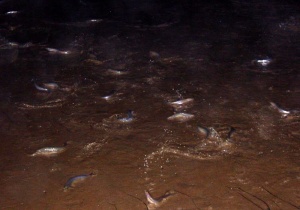 Spawning grunion on the beach near San Diego, CA

California grunion are small silvery fish found only along the coast of southern California and northern Baja California. Unlike other fish, grunion come completely out of the water to lay their eggs in the wet sand of the beach. For additional information, see Grunion.org and this article on Grunion Greeters.

Two somewhat similar species that use the beaches to spawn in the Pacific Northwest are the sand lance and surf smelt.

Grunion runs have long been an iconic feature of Southern California beach culture. For generations, residents have recounted tales of spectacular runs, or perhaps equally memorably, waiting in the dark for fish that never showed up.

Leuresthes tenuis, or grunion as they are commonly known, are found only along the coast of California and Baja California. Because they are rarely observed except during their spectacular spawning runs, little is known about their population status. Runs take place within a narrow window of time; only an hour or two after the highest tides in spring and summer, and only at night. Adult grunion live near shore in shallow marine waters, but details are so scarce that ichthyologist Michael Horn observed, "No other creature goes to such lengths to present itself to our eyes during its most intimate moments, while the rest of its life is veiled in mystery."

Grunion runs have become a popular recreational fishing opportunity along California's coast. However, because of scarcity of the species, compounded by its vulnerability while spawning, restrictions on harvesting the fish have been in place as far back as 1927. A fishing license is required for persons 16 years and older to capture grunion. Grunion may be taken by sport fishers using their hands only—nets, buckets and other gathering devices are prohibited.

The life history of the grunion connects several aspects of the coastal marine habitat. The eggs incubate in beach sand for approximately two weeks, until washed free by the next highest tides. Larval fish develop in the plankton-rich water for about a month, before entering a juvenile phase where they move into the calmer bays and estuaries. Adults probably live in open water near shore. Because of these shifts, grunion are susceptible to multiple human and environmental impacts. According to the California Department of Fish and Game, grunion face the loss of critical spawning habitat by beach erosion, harbor construction and pollution. Studies also indicate that beach grooming practices pose a potential risk to incubating grunion eggs.

These concerns have prompted researchers at Pepperdine University to create Grunion.Org, a new project that provides a way for the public to interact with grunion as an alternative to capture and consumption. For several years, the researchers have worked with hundreds of volunteer "grunion greeters" to monitor the strength, duration, and location of grunion runs on sandy beaches. Trained volunteers, many of whom are Surfrider Foundation members, report results via a Web interface, and with the cooperation of various local agencies and aquariums, compile detailed data to evaluate the status of the species. Their goal is to increase appreciation for this unique animal and enhance general understanding of beaches as a wildlife habitat.

UPDATE: Dr. Martin's work with grunion has "spawned" the creation of a Beach Ecology Coalition whose mission is "To enhance ecosystem conservation and beach management to balance natural resource protection and recreational use."


This article is part of a series on the Ocean Ecosystem looking at the various species of plants and animals which depend on a healthy coast and ocean environment, and the threats that can be posed to them by human activity