Hurricane Sandy struck coastal areas in the New York/New Jersey area on October 29, 2012, causing massive damage to beaches, coastal infrastructure and residential areas from storm surge, flooding and strong winds. Hurricane Sandy was the deadliest and most destructive tropical cyclone of the 2012 Atlantic hurricane season, as well as the second-costliest hurricane in United States history. Damage in the U.S. was estimated at over $71 billion. There were at least 75 direct deaths in eight states, including 53 in New York, 12 in New Jersey, 5 in Connecticut, 2 each in Pennsylvania and Virginia, and 1 each in New Hampshire, West Virginia and Maryland. 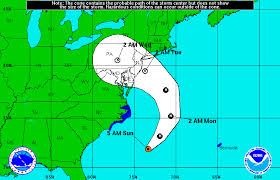 In response to Sandy, the Federal government issued emergency declarations and an Executive Order and Congress passed a massive bill ($50.5 billion with $3.46 billion to the U.S. Army Corps of Engineers for “construction”) to rebuild along the coast. The question is, will the rebuilt coast be less susceptible to damage (more sustainable) when the next Sandy comes along, or are we destined to repeat past mistakes in coastal planning?

President Obama signed emergency declarations on October 28 for several states expected to be impacted by Sandy, allowing them to request federal aid and make additional preparations in advance of the storm. The National Guard and U.S. Air Force put as many as 45,000 personnel in at least seven states on alert for possible duty in response to the preparations and aftermath of Sandy. 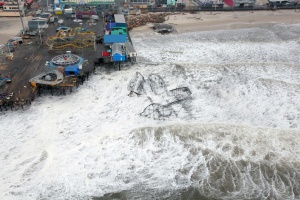 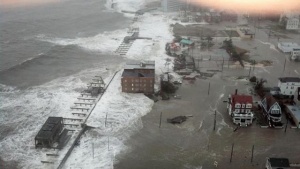 The worst damage from Sandy occurred in coastal areas of New Jersey and New York. In New Jersey, the Jersey Shore suffered the most severe winds and surf and the most damage from the storm. Mantoloking was especially hard hit, suffering severe "wash over" including the creation of two new, temporary inlets. Approximately two dozen oceanfront houses in Mantoloking were completely removed from their foundations and destroyed. The Belmar boardwalk was destroyed, along with Perth Amboy's marina and waterfront. Much of the Casino Pier in Seaside Heights and nearby Funtown Pier in Seaside Park collapsed into the ocean due to intense waves. The seaside communities on Long Beach Island were among the hardest-hit. Scores of homes and business were destroyed, and the storm surge deposited up to four feet of sand on island streets making them impassable. Preliminary estimates suggested between $750 million and $1 billion damage on the island alone. Ortley Beach was declared "Ground Zero" because of the unbelievable amount of devastation.

In New York the effects of Hurricane Sandy were also severe, particularly in New York City, its suburbs, and Long Island. Sandy's impacts included the flooding of the New York City Subway system, many suburban communities, and most of the road tunnels entering Manhattan. Numerous homes and businesses were destroyed by fire, including over 100 homes in Breezy Point, Queens. Large parts of the city and surrounding areas lost electricity for several days, and several thousand people in midtown Manhattan were evacuated for six days. At least 53 people died in New York as a result of the storm. Economic losses across New York were estimated to be at least $18 billion.

On November 2, the American Red Cross announced they had 4,000 disaster workers across storm-damaged areas, with thousands more en route from other states. Nearly 7,000 people spent the night in emergency shelters across the region.

Following expedited Major Disaster Declarations for New Jersey and New York provided by the President, FEMA deployed over 7,000 personnel to the impacted area, established 65 Disaster Recovery Centers to support affected communities, provided millions of bottles of water, hundreds of thousands of meals, and hundreds of generators to affected states, and approved over $600 million in direct assistance to hundreds of thousands of individuals impacted by the storm.

“A disaster of Hurricane Sandy's magnitude merits a comprehensive and collaborative approach to the long-term rebuilding plans for this critical region and its infrastructure. Rebuilding efforts must address economic conditions and the region's aged infrastructure -- including its public housing, transportation systems, and utilities -- and identify the requirements and resources necessary to bring these systems to a more resilient condition given both current and future risks.”

“The Task Force will identify opportunities for achieving rebuilding success, consistent with the NDRF's commitment to support economic vitality, enhance public health and safety, protect and enhance natural and manmade infrastructure, and ensure appropriate accountability. The Task Force will work to ensure that the Federal Government continues to provide appropriate resources to support affected State, local, and tribal communities to improve the region's resilience, health, and prosperity by building for the future.”

Some other key elements of the Executive Order are for the Task Force to:

On January 28, 2013 the Senate passed a massive $50.5 billion dollar Hurricane Sandy relief bill. President Obama signed the bill into law January 29. It took Congress three months after Sandy devastated areas along the East Coast to approve the emergency funding. The bill, H.R. 152, includes $50 million to the U.S. Army Corps on Engineers for "investigations" and $3.461 billion for "construction." Copied below are portions of the text from the bill:

“For an additional amount for Operation and Maintenance for necessary expenses related to the consequences of Hurricane Sandy, $821,000,000, to remain available until expended to dredge Federal navigation channels and repair damage to United States Army Corps of Engineers projects.”

In August 2013 the Hurricane Sandy Rebuilding Task Force released the report Hurricane Sandy Rebuilding Strategy. The Rebuilding Strategy includes 69 recommendations, across several policy areas, that are designed to align funding with local rebuilding priorities, eliminate barriers to recovery while ensuring effectiveness and accountability, coordinate across levels of government, facilitate a region-wide approach to rebuilding, and promote resilient rebuilding so that the region will be better able to withstand the impacts of existing risks and future climate change. The Rebuilding Strategy is in alignment with President Obama’s Climate Action Plan, released in June 2013. Both the strategy and the Climate Action Plan are designed to strengthen communities against future extreme weather and other climate impacts.

On June 11, 2013, New York City released A Stronger, More Resilient New York, a comprehensive plan that contains actionable recommendations both for rebuilding the communities impacted by Sandy and increasing the resilience of infrastructure and buildings citywide.

Coastal managers in New York, New Jersey and other states are now beginning to re-evaluate their options for dealing with future major storms and future sea level rise. New York has offered coastal homeowners in certain areas a buyout program to incentivize moving away from the coast and turning that land into greenspace intended to provide protection from future storms. Former New York City mayor Michael Bloomberg has spoken in favor of limited retreat as well as the development of natural buffer zones. An Op-Ed In a Global Warming World: Protect and Rebuild or Retreat? by Bill Chameides, Dean, Nicholas School of the Environment, Duke University further explores these options.

Despite the provisions in the bill for constructing projects that “will support the long-term sustainability of the coastal ecosystem and communities and reduce the economic costs and risks associated with large-scale flood and storm events”, and the stipulations in the President’s Executive Order that emphasize coastal resilience, sustainability and the restoration of ecosystem functions, there is concern that in the haste to rebuild, mistakes of the past will be repeated and that infrastructure that failed under Sandy will fail again. This concern is underscored by the provisions in the bill that appear to restrict the spending to previous, existing or “under study” Corps of Engineers projects, seemingly leaving little room for innovative approaches.

Another concern is the sheer magnitude of the budget appropriation. In an interview on NPR concerning these matters, Rob Young, professor at Western Carolina University stated:

“Since about the 1930s, Ira, we've spent around $1 billion total on all of the beach building projects in New Jersey. We tracked this in a database at the Program for the Study of Developed Shorelines. So that's $1 billion in 2012 dollars to rebuild all of the beaches through the last several decades in New Jersey. So actually, $3.5 billion is a huge amount of money. I mean, they can rebuild every beach from Delaware to Connecticut, and there's going to be money left over. You know, I'd really to know what they're going to do with that money. And it's not spelled out in the authorization bill.”

Will coastal rebuilding after Sandy repeat the mistakes of the past and thus be unsustainable, or will projects be planned and implemented that will increase coastal resilience? Time will tell. The following 10-minute video explores that question, with examples from New York, New Jersey and North Carolina.

H.R. 152 - Making supplemental appropriations for the fiscal year ending September 30, 2013, to improve and streamline disaster assistance for Hurricane Sandy, and for other purposes