The intertidal zone (sometimes referred to as the littoral zone) is the area that is exposed to the air at low tide and underwater at high tide (the area between the low and high tide lines). This area can include many different types of habitats, including steep rocky cliffs, sandy beaches, or wetlands. The area can be a narrow strip, as in Pacific islands that have only a narrow tidal range, or can include a much wider expanse of shoreline where a shallow beach slope interacts with wider tidal range.

Organisms in the intertidal zone are adapted to an environment of harsh extremes. Water is available regularly with the tides but varies from fresh with rain and river flows to highly saline and dry salt with drying between tidal inundations. The action of waves can dislodge residents in the intertidal zone. With the intertidal zone's high exposure to the sun the temperature range can be anything from very hot with full sun to near freezing in colder climates. Temperature extremes within some microclimates in the littoral zone can be moderated by local features and larger plants such as mangroves.

Adaption in the littoral zone is all about making use of nutrients supplied in high volume on a regular basis from the sea which are actively moved to the zone by tides and ocean swells. Edges of habitats, in this case the dry sand beach/rocky shore and the sea, are themselves often significant ecologies. See this discussion on beach ecology.

A typical rocky shore can be divided into a spray zone or splash zone (also known as the supratidal zone), which is above the spring high-tide line and is covered by water only during storms, and an intertidal zone, which lies between the high and low tidal extremes. 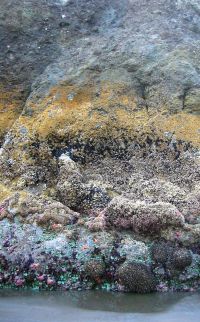 A rock on a beach near Kalaloch, Washington. The rock, seen at low tide, exhibits typical intertidal zonation.

Depending on the substratum and topography of the shore, additional features may be noticed. On rocky shores, tide pools form as seawater and marine life is trapped in hollows as the tide recedes.

This subregion is mostly submerged - it is only exposed at the point of low tide and for a longer period of time during extremely low tides. This area is teeming with life; the most notable difference with this subregion to the other three is that there is much more marine vegetation, especially seaweeds. There is also greater biodiversity. Organisms in this zone generally are not well adapted to periods of dryness and temperature extremes. Some of the organisms in this area are abalone, anemones, brown seaweed, chitons, crabs, green algae, hydroids, isopods, limpets, mussels, nudibranchs, sculpin, sea cucumber, sea lettuce, sea palms, sea stars, sea urchins, shrimp, snails, sponges, surf grass, tube worms, and whelks.

Creatures in this area can grow to larger sizes because there is more available energy in the localized ecosystem and because marine vegetation can grow to much greater sizes than in the other three intertidal subregions due to the better water coverage: the water is shallow enough to allow plenty of light to reach the vegetation to allow substantial photosynthetic activity, and the salinity is at almost normal seawater levels. This area is also protected from large predators such as large fish because of the wave action and the water still being relatively shallow. 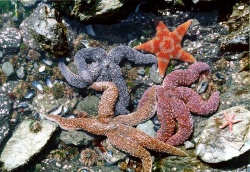 Marine life in the intertidal zone

The intertidal region is an important model system for the study of ecology, especially on wave-swept rocky shores. The region contains a high diversity of species, and the different zones caused by the physics of the tides causes species ranges to be compressed into very narrow bands. This makes it relatively simple to study species across their entire cross-shore range, something that can be extremely difficult in, for instance, terrestrial habitats that can stretch thousands of miles. Communities on wave-swept shores also have high turnover due to disturbance, so it is possible to watch ecological succession over years rather than decades. 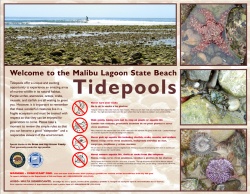 Since the foreshore is alternately covered by the sea and exposed to the air, organisms living in this environment must have adaptions for both wet and dry conditions. Hazards include being smashed or carried away by rough waves, exposure to dangerously high temperatures, and desiccation (drying out). Typical inhabitants of the intertidal rocky shore include sea anemones, barnacles, chitons, crabs, isopods, mussels, seastars, and many marine gastropod mollusks such as limpets, whelks etc.

As with the dry sand part of a beach, legal and political disputes can arise over the ownership and use of the "wet sand" intertidal zone.