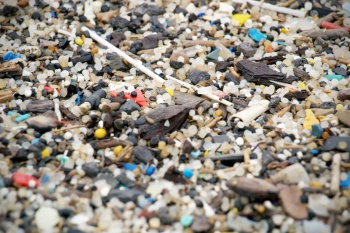 Mixed nurdles and other plastic debris on the beach. Source: sustainablecoastlines.org

Also known as 'mermaid tears', nurdles are the pre-production pellet form of plastics. They are generally 1 millimeter (mm) to 5 mm in size and are made in a variety of colors and types of plastic. They are typically manufactured by large chemical companies from petroleum-based non-renewable resources. There is a growing bioplastics industry emerging but it has issues of its own, mainly that current versions of bioplastics do not biodegrade in the ocean.

Nurdles are typically shipped to plastic product manufacturers in rail cars or by truck. Some nurdles may be lost during transfer or spilled accidentally from damaged containers. Unless spilled nurdles are cleaned up they will be swept through the watershed by rain or dry-weather runoff to the nearest lake, bay or ocean and also deposited on the adjacent beaches.

The presence of nurdles on beaches is quite common, although they are not always obvious. Nurdles often closely resemble grains of sand, but are typically slightly larger, with a uniform, spherical shape. In February 2017, the Great Winter Nurdle Hunt survey was carried out by 600 volunteers over a weekend. The search of 279 beaches around the UK found that almost three-quarters of them were littered with nurdles. The largest number recorded were found at Widemouth Bay, Cornwall, where 33 volunteers collected some 127,500 pellets found on a 100-metre stretch of beach.

The main issue with nurdles is that they can be mistaken for food by animals (fish, birds, marine mammals, sea turtles) and consumed. Nurdles have a striking resemblance to fish eggs. Another concern with release of nurdles (and other plastic materials) into the marine environment is that plastic particles may highly concentrate and transport synthetic organic compounds (e.g. persistent organic pollutants, POPs) commonly present in the environment and ambient sea water on their surface through adsorption. These pollutants can then potentially bioaccumulate up the food chain.