Renewable Energy vs. Fossil Fuels for Electricity: Facts and Forecasts

By Elaine Thompson
Original post from 2017, with minor 2021 updates regarding solar.

The peak demand for fossil fuels is soon approaching. Although the affordable prices for coal and gas are expected to continue for the immediate future, there is a very real shift occurring in the global energy market. Fossil fuels currently power nearly 63% of electricity in the United States, but Bloomberg’s New Energy Outlook 2017 speculates that due to the demand for cleaner and greener energy, and the increasing affordability of renewable technologies, by 2040, 38% of electricity in the U.S. will be sourced from renewables like solar, wind, and ocean energy.

Here are some fast facts about the current—and future—state of fossil fuels vs. renewables in the U.S. energy sector. 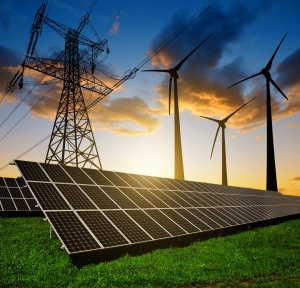 Fossil Fuels Remain King—For Now, At Least on the Surface

Renewables are getting less expensive, with the average price of solar panels falling over 60% since 2010 and wind turbine prices falling 20-40% since 2008; electricity from coal and natural gas is still directly cheaper. To note, the current and projected price of fossil fuels doesn’t truly reflect the social and environmental costs of extraction and use, so though the price may seem low, the true cost to society is much higher. This is something economists refer to as having a negative externality, and you can learn more about this topic from the Union of Concerned Scientists.

In addition to fossil fuel reserves and current infrastructure, divestment will be a slow and laborious process because there’s a lot of staying power tied up in fossil fuels. Companies that extensively use or produce fossil fuels, federal representatives of states with large fossil fuel reserves, and residents of fossil fuel-producing states often rely on fossil fuel markets for their livelihood. Some of these communities and industries resent public policies which provide incentives and subsidies for renewable energy, out of fear of destabilizing the industries that their local economies rely on.

A Mixed Energy Future is Coming

At the current rate of adoption, the 2017 Bloomberg report mentioned above expects the U.S. power sector emissions in 2030 to be 30% less than 2005, nearly meeting a headline goal of Obama’s Clean Energy Plan, even without standardized federal policy.

This movement bodes well for the future condition of the United States’ (and really global) economy, inhabitants, and natural environments. Fossil fuels emit hundreds of pounds of greenhouse gas emissions (measured in carbon dioxide equivalents) for every 1 million British thermal units of energy (or Btu) burned. These emissions contribute to dangerous changes in the chemical composition of the Earth’s atmosphere, resulting in ocean acidification, sea level rise, increased frequency and magnitude of extreme weather events, and more. Additionally, the exploration, extraction, processing, delivery, and use of fossil fuels can emit significant amounts of greenhouse gas emissions and pollutants, causing direct harm to human and wildlife health, degrading natural landscapes, and further contributing to climate change. An investment in clean energy is one that should help the whole country breathe easier.

Some Traditional Utilities Are Becoming Renewable

Most electric utility leaders are aware of the fact that the energy landscape is changing, and some are taking steps to invest in renewables while maintaining their current fossil fuel services and portfolios. Some utilities actually build out green power projects, while others invest through renewable energy certificates or credits (RECs). RECs are tradable receipts that prove that an individual or organization produced or purchased renewable energy.

Buying RECs isn’t the same as buying renewable energy directly, because once power enters the grid, it is nearly impossible to tell where it came from. Instead, when consumers buy RECs, they are buying a certificate of energy ownership, so they can effectively claim a portion of green energy on the grid. For many people and organizations, purchasing RECs is an accessible way to support renewable energy infrastructures, especially if they are not in a position to invest in solar panels or other renewable energy technology for their homes or businesses.

Homes and Businesses Can Transition to Renewable Energy

RECs are just one of the many renewable-incentive programs available to people and businesses wanting clean energy. Those who would like to invest more tangibly can purchase renewable energy technology, lease the tech, or opt for a power purchase agreement (PPA).

Solar energy is the most popular and well-known renewable technology for homes and businesses, though wind energy is also available for small-scale installs. In 2017, the costs to purchase and install a standard solar array can run upward of $18,000, while wind turbines fall closer to $30,000. A 2021 update by EcoWatch estimates that solar array prices now fall around $14,700 (for 5 kWn system) to $29,400 (for 10 kWh system), but prices vary based on region, home size and more.

Luckily, there are some federal and local tax incentives for both wind and solar installs. For solar arrays installed in 2021 and 2022, there's a 26% federal tax credit, but it's set to reduce in 2023. Smaller incentive programs are available, but the terms and eligibility for those programs vary state by state. From wind to solar, consumers can find out which energy incentive programs they qualify for by searching the Database of State Incentives for Renewables and Efficiency. There are also financing options for installing solar. You can also visit this helpful resource to learn more about solar pricing, financing and more.

Once a home or business starts producing renewable energy from an owned array or turbine, it can generate power for its own use and potentially sell excess to a local utility.

Leasing is a much more affordable option than purchasing, at least in the short term. The lessee pays the leasing company a set monthly amount to use the solar panels to generate energy. Leases typically run at least 20 years, though they can extend beyond that.

Renewable tech leasing has the added benefit of easier maintenance and installation. The leasing company will often cover those costs, since the array or turbine is their investment. The flip side is that any incentivizing tax credits or rebates will also go to the company that owns the technology.

Investing in a PPA

Similar to a lease, a PPA provides access to green energy without the upfront costs that come with purchasing a solar array or wind turbine. The company providing the PPA will install the renewable tech on the signee’s property and maintain the setup, while the signee pays the company to use the energy generated.

Some companies use “lease” and “PPA” interchangeably, but the two are actually different. In a renewable lease, lessees pay a monthly fee for the panels or turbines and can directly use the energy they generate. With a PPA, as the name implies, the lessee purchases the energy generated from the PPA company at a discounted rate.

Fossil fuels may dominate the energy markets today, but the future of energy is renewable. By participating in renewable energy incentive programs, conserving electricity, and reducing the use of fossil fuel products like plastics and gasoline, individuals and corporations can help make that future a reality even sooner.