Most surfers and swimmers in southern California take solace that “the man in the grey suit” generally prefers the colder waters of northern California, where encounters with great white sharks are more frequent. Recently, those perceptions have changed.

During the summer of 2010 two relatively small white sharks cruising just outside the famed San Onofre surf breaks were captured on video by Chuck Patterson from his stand-up paddleboard (SUP). His video went viral on Facebook and changed public perceptions about where white sharks spend their time.

Patterson, a Dana Point waterman, saw the sharks while out surfing and came back the following day with an underwater camera attached to a ten-foot pole. He paddled his SUP outside the surf zone at Old Mans at San Onofre State Beach and captured an amazing video of the two white sharks cruising just under the surface. His online video now has over 2 million views.

Over the last several years there has been increased attention paid to sightings of white sharks off of San Onofre and at other locations in southern California such as Sunset Beach near Pacific Palisades. It is a reminder that white sharks are a migratory species that do spend time in the warmer waters off of southern California.

The white shark (Carcharodon carcharias) is a large shark found in temperate coastal surface waters in all major oceans. As the apex species amongst the ocean’s most famous apex predators, the white shark is well known for its size and fearsome predatory habits. The largest individuals can exceed twenty feet in length and weigh over 4,000 pounds. The sharks seen in southern California are typically called juveniles but according to Dr. Chris Lowe, a Cal State Long Beach shark researcher, they are typically 10-to-12-foot sub-adults, more like “teenagers". 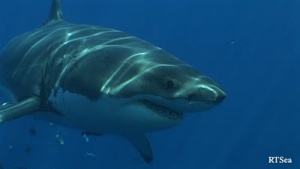 White sharks reach maturity at around 15 years of age and can have a life span of over 30 years. The white shark is one of the primary predators of marine mammals (seals, sea lions, dolphins) and they also prey upon fish, whales, and seabirds.

Researchers have tagged white sharks with satellite tags that can be used to track the sharks’ whereabouts and even the depths they are diving to. These studies have revealed that white sharks are a highly migratory species. A recent study by Dr. Salvador Jorgenson on Pacific white sharks found that they adhere to a highly predictable migratory cycle, traveling from northern California south and east to areas of warmer water between Baja California and Hawaii during the summer months. Further, they persistently return to the same coastal hotspots.

Additional studies have found that some white sharks migrate from Baja California to Hawaii and another white shark swam from South Africa all the way to Australia and back over the course of a year. While the precise reasons for these migrations are not well understood, researchers believe the primary reasons are for mating and seasonal feeding.

Over the last several years there has been increased attention paid to the sightings of white sharks at San Onofre, which begs the question, is this a new phenomena? Experts are not sure.

It’s not clear why the sharks tend to aggregate at San Onofre or if there are actually more of them. Chuck Patterson’s theory is that the sharks were attracted by the warm water emitted from the San Onofre Nuclear Generating Station (SONGS). Since SONGS has now been permanently shut down, the source of warm water has been removed. Another theory is that they are attracted to the lingering scent of a Blue Whale that was buried on the beach near Trail 1 in 2003 or 2004.

The increased attention paid to white sharks is also surely due to increased use of coastal areas by surfers, stand-up paddleboarders, kayakers, swimmers and divers as well as their ability to document and share their observations on the Internet.

While shark attacks remain a common fear amongst ocean users, sharks don’t typically prey upon humans and the statistics show that attacks are exceedingly rare given the millions of people who recreate in the ocean every day.

From 1900 to the present there have been 180 authenticated unprovoked shark attacks reported from the Pacific Coast of North America. The California Department of Fish and Wildlife reports:

There have been 13 fatal attacks since 1952, with only three of those being south of Santa Barbara. The most recent fatal attacks in California occurred at Solana Beach in April 2008 when a distance swimmer was bitten in the leg and died from the excessive bleeding, at Surf Beach (near Jamala Beach in northern Santa Barbara County) in October 2010 when a boogie boarder's leg was bitten off and he died from excessive bleeding, and at the same beach in October 2012 when a surfer was attacked. Recent serious but non-fatal shark attacks in Southern California have included attacks on swimmers in Corona del Mar in 2016 and at Church (San Onofre State Beach) in 2017. Here are reports of shark attacks along the Pacific Coast since 2000 and recent Pacific Coast shark news.

It is notable that even as ocean recreation has greatly increased over the last sixty years (particularly surfing, swimming and scuba diving) white shark incidents have not increased.

White sharks are known to be curious, as demonstrated by Chuck Patterson’s video, and many shark bites may be motivated by curiosity rather than predation. In actuality, white sharks are more threatened by humans that we are of them.

Despite some optimism that white sharks may be experiencing a recovery, they remain at risk due to their slow reproductive potential and thus their vulnerability to even moderate fishing pressure.

White sharks are still targeted for their jaws and fins and for game records due to their enormous size. Occasionally, there are vengeance-fueled efforts to kill white sharks after biting incidents occur. For example, after a fatal tiger shark attack of a San Francisco surfer occurred in mainland Mexico, authorities mounted a hunt for sharks off the coast. Degradation of inshore habitats is also a threat to the long-term viability of white sharks.

Sadly, Dr. Lowe explains autopsies of dead juvenile white sharks found in Mexico show extremely high levels of DDT and PCBs. He suspects that these toxins have bioaccumulated from eating fish that live in contaminated areas off of Los Angeles.

In 1994, California became the second jurisdiction in the world (after South Africa) to protect the white shark. California State Assembly Bill 522, signed into law by then governor Pete Wilson, stipulated that, with limited exceptions, no white sharks could be taken in California waters for at least five years. This protective legislation which has been extended indefinitely was the result of much hard work by an unusual alliance of legislators, fishermen, surfers, divers, kayakers, scientists, and environmentalists. AB 522’s author was Dan Hauser, former state assemblyman from Humboldt County. His willingness to draft and fight for legislation on behalf of alleged "man-eaters" seems ironic considering that he is an avid sport diver. But his conviction was just one more example of the increasing social consciousness about the importance of conserving wildlife.

On June 4, 2014, consistent with the recommendation of the California Department of Fish and Wildlife (CDFW), the California Fish and Game Commission (Commission) determined that based on the best available science, listing the Northeastern Pacific population of white shark as a threatened or endangered species under the California Endangered Species Act (CESA) is not warranted. The Commission's decision took effect on August 22, 2014, when the findings were published in the California Regulatory Notice Register.

In September 2012 it was announced that the federal government would examine whether to protect the West Coast population of great white sharks under the Endangered Species Act. NOAA Fisheries subsequently formed a Biological Review Team (BRT) of fisheries scientists to review the best available scientific and commercial information concerning the population structure, biological status, and threats facing White Sharks in the northeastern Pacific. Threats identified to White Sharks in this report included 1) fisheries mortality in U.S., Mexican and international waters, 2) loss of prey due to overharvesting, 3) small population effects (such as human-caused wildlife disturbances), 4) disease and predation, 5) habitat degradation linked to contaminants, and 6) global climate change. Their final status review report, released in June 2013, concluded that the NEP population was a distinct population segment but that it did not warrant listing at this time under the federal ESA (NOAA Fisheries Service, 2013).

White sharks have also received international protection. They have been listed for protection under the Convention on International Trade in Endangered Species (CITES) and the World Conservation Union (IUCN) because they are considered to face a high risk of extinction in the wild.

Despite these listings, trade in white shark products, primarily fins for shark fin soup, persists. In 2011 a bill banning the possession, sale or distribution of shark fins was introduced in the California legislature and was signed into law by Governor Jerry Brown.

One of the most amazing things about spending time in the ocean is that despite living along an urbanized coastline, when you enter the ocean, you enter the wild. With all wilderness experiences there are inherent risks from both the elements and wildlife. That said, our fear of sharks greatly exceeds the risk. As Chuck Patterson noted, witnessing the majesty of white sharks is one of the most magical ocean wilderness experiences anyone can have.