A slough (pronounced "slew") is a swamp or shallow lake system, usually a backwater to a larger body of water.

A slough is typically used to describe wetlands. Sloughs along the edges of rivers form where the old channel of the river once flowed. These areas are also referred to as oxbows because they tend to form at a bend in the old river bed, making them look like the horns of an ox when viewed from the air. 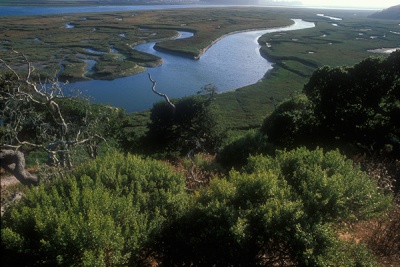 Along the West Coast, sloughs are often named for the quiet, backwater parts of bays and therefore, they are part of the estuary, where freshwater flows from creeks and runoff from land mix with salty ocean water transported by the tides.

Ocean Facts - What is a Slough? (NOAA National Ocean Service)