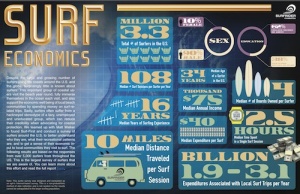 Surf economics or 'Surf­onomics' is an offshoot of natural resource economics that seeks to quantify the worth of waves, both in terms of their value to surfers and businesses and their non-market value — or how much people would be willing to pay not to lose them.

An under-appreciated aspect of surfing is the economic benefit that surfing areas bring to beach communities. An estimate of the economic scale of the surfing industry, including travel, surf-branded clothing and the manufacture of surfboards, is on the order of $10 billion per year and reaches into most countries on the planet. While this is an impressive number, it is likely to significantly under-account for the total economic value of recreational surfing. A 2017 study estimated the worldwide value of good surfing waves to be $50 billion per year. Surfing represents a very profitable market, a growing industry, and a reason people move to coastal areas. Surfing plays a major part in the recreation and tourism strategies for many coastal locations. Any negative impact to the surfing amenity in these locations may have serious consequences for the resident surfing population, visitors to the area, the local surf industry and the entire local coastal economy.

The documented positive economic impact of visitors to surfing areas such as Trestles (1, 2, 3) in southern California; Mavericks in central California; Brevard County, Florida; Mundaka in Spain; Pichilemu in Chile; and along the Gold Coast in Australia; and many other areas is substantial. A study of surfers visiting Trestles estimated a range for the annual economic impact to the city of San Clemente that could be from $8 to $13 million/year. In 2016, a study by researchers at the University of Oxford concluded:

We ﬁnd that surﬁng waves contribute approximately US$50 billion to global economic activity each year.

In 2011, Surfrider Foundation collaborated with Surf-First to produce a report A Socioeconomic and Recreational Profile of Surfers in the United States. That report concluded, in part:

Our findings strongly contradict the historic stereotype of surfers as an uneducated and unemployed fringe group of coastal users. The surfers in our sample of over 5,360 respondents are avid athletes in their early 30’s who are highly employed and well paid. Our national profile is a 34-year-­old, educated and employed male who earns $75,000 per year. The average surfer in the U.S. has 16 years of experience, surfs 108 times per year, and spends an average $40 per visit. Their surfing-­related expenditures benefit local economies. Surfers arrive at the beach early in the morning from nearby communities and surf for 2-­3 hours. This characterization was similar in each regional and surf spot sub‐sample. All of the sub‐samples found full­‐time employment above 50% and income above $50,000. The surfers we sampled tend to be more educated and have higher income levels than the general public.

For a more detailed discussion of surfing and beach economics, see Dr. Chad Nelsen's Collecting & Using Economic Information to Guide the Management of Coastal Recreational Resources, the doctoral dissertation that he completed at UCLA in the Environmental Science and Engineering program in March 2012.

Here's another article on surfonomics from Fortune Magazine.

In addition to the studies mentioned above, Surfrider Foundation and its partners are conducting coastal and ocean recreation studies in regions across the United States. The studies collect data from recreational users on non-consumptive activities such as beach going, surfing, kayaking, diving, and wildlife viewing. Study results include spatial data (e.g., maps) and economic impact data. This information fills a key gap in our understanding of coastal and ocean uses and is being used to inform regional ocean planning efforts. Please see here for links to study reports and fact sheets.