We’ve all heard about the issue of greenhouse gas (GHG) emissions contributing to climate change, with the most common culprit being carbon dioxide. Yet you may wonder why this is the case, where that carbon came from in the first place, and how it’s all connected. Read below to learn more about the infamous element carbon, GHG carbon dioxide and the Earth’s natural carbon cycle. To learn more about various carbon sources and sinks, check out this article.

Carbon is a chemical element that serves as one of the essential elements of life alongside oxygen, hydrogen, and nitrogen; together, these four elements make up 96% of all living matter. As the fourth most abundant element in the universe, most of Earth’s carbon is stored in rocks and minerals, while the rest can be found in the ocean, atmosphere, plants, soils, and fossil fuels. It is also the foundation of all life on Earth, as it is required to form the complex molecules, like proteins and DNA, that make-up animal and plant tissues. 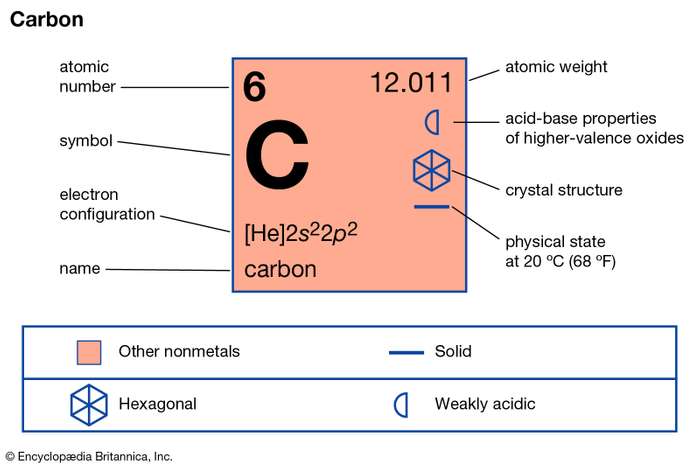 Carbon has become a hot topic as the impacts of climate change are better understood. The carbon compounds carbon dioxide (CO2) and methane (CH4) make-up powerful greenhouse gases that have contributed significantly to global warming. Due to the focus on CO2 in the climate conversation, the term “carbon” is often synonymous with atmospheric CO2.

Carbon dioxide, commonly notated as CO2, is a chemical compound composed of carbon and oxygen molecules. Present in the Earth’s atmosphere at low concentrations, CO2 is a naturally occurring, heat-trapping gas released through natural and artificial processes such as respiration, volcanic eruptions, and deforestation. CO2 is just as essential for life on Earth as carbon is: CO2 is present as an essential compound for the processes of respiration and photosynthesis.

CO2 and other “greenhouse gases”, such as methane, water vapor, and chlorofluorocarbons, act as insulation in the Earth’s atmosphere in a process known as the “Greenhouse Effect”, described in Figure #. The Greenhouse Effect is the process that regulates the temperature of Earth and allows it to be a habitable planet. With too many greenhouse gases the Earth would be too hot and have an atmosphere similar to Venus; too little and the Earth would be too cold. 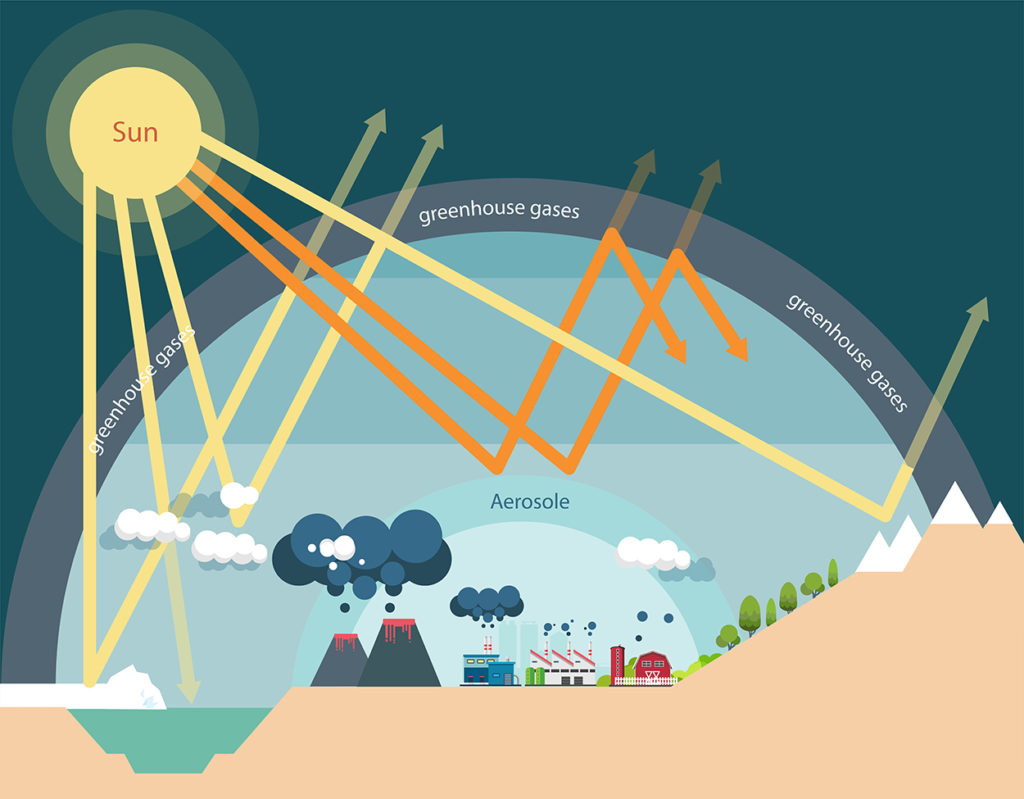 Figure 2: A simplified description of the Greenhouse Effect. Graphic provided by Cool Australia.

However, with the excess production of CO2 due to the burning of fossil fuels, deforestation, and other human activities since the start of the Industrial Revolution in 1750, the atmospheric carbon reservoir has been oversaturated, causing excess atmospheric warming. The level of atmospheric CO2 has been measured by an observation station set atop one of the world’s largest volcanos, Mauna Loa, in 1958 by Charles Dave Keeling. This measurement has been used as foundational evidence for anthropogenic warming. Significant effort has been made recently to address the increasing atmospheric carbon dioxide concentrations and mitigate the impacts of climate change. 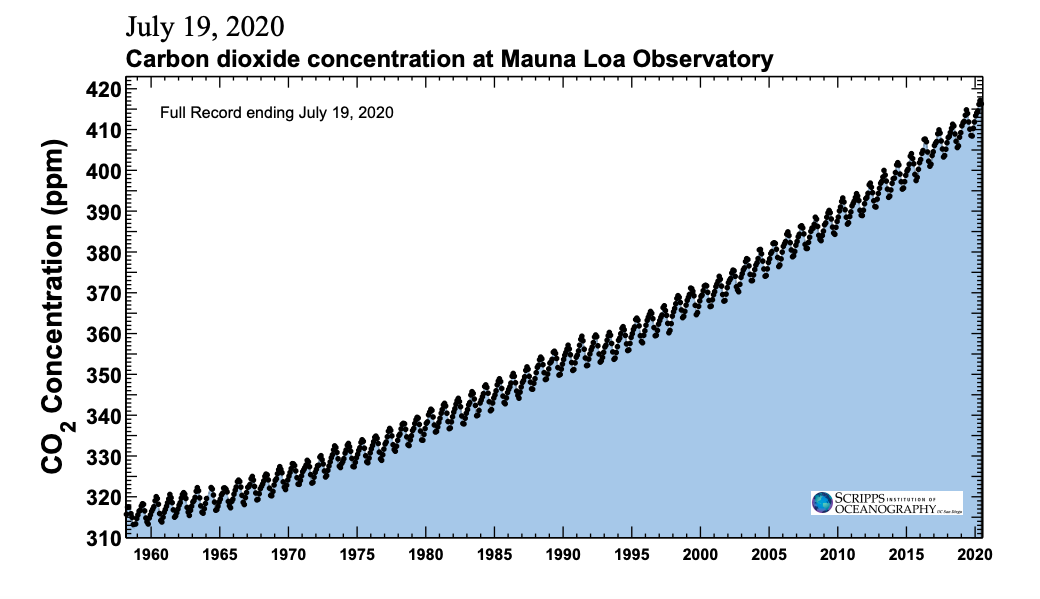 Methane is another prevalent carbon-based greenhouse gas. Notated as CH4, methane is a chemical compound composed of carbon and hydrogen and is a potent heat absorber. Methane is naturally emitted from wetlands, oceans, the digestion of animals (such as termites), and from thawing permafrost sites; while the compound is artificially emitted from anthropogenic sources such as landfills, agriculture practices, and energy generation. 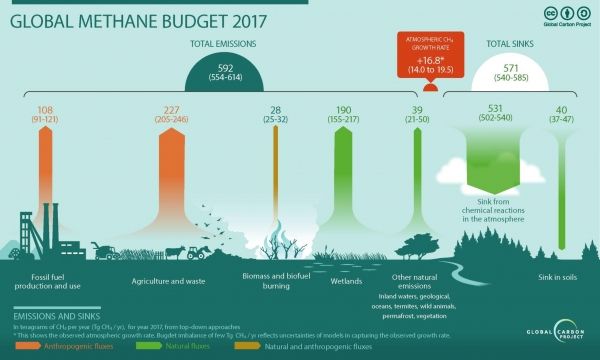 Though methane is found in small quantities, it is a powerful greenhouse gas and is significantly more impactful to heating the atmosphere than CO2. Like all greenhouse gases, both methane and CO2 are measured on a scale known as Global Warming Potential (GWP); this scale factors in a gas’ ability to trap heat and how long it remains in the atmosphere to compare the impact that different gases have on the atmosphere. CO2 is used as the reference gas, and as such is given a GWP rating of 1, regardless of the timescale used as it can stay in the atmosphere for thousands of years. Comparatively, methane is estimated to have a GWP of 28-36 over a 100-year time scale since it remains in the atmosphere for about a decade but absorbs much more heat than CO2. However, due to its short residence time, methane -- and other gases with short lifetimes -- are commonly estimated on 20-year timescales instead in order to quantify the impact they have on heating the atmosphere within their lifetimes; therefore, within the 20 years of being emitted, methane has a GWP of 84-87. With its great heating potential and the fact that methane concentrations have risen by about 150% since the start of the Industrial Revolution, methane accounts for 20% of the heating effects of all greenhouse gases. But due to its shorter residence time in the atmosphere, methane has yet to be made more of a priority for concentration reduction over CO2.

The Carbon Cycle is the term used to describe the flow of carbon through its reservoirs in the atmosphere, ocean, and terrestrial biosphere and lithosphere (the rigid outer layer of the Earth’s crust). Earth’s largest carbon reservoir is in sedimentary rocks, such as limestone, which can hold carbon for thousands of years. Any changes in one of the reservoirs impacts the other reservoirs; for example, any changes that release more carbon into the atmosphere, such as by pulling carbon (fossil fuels) out of the lithosphere and subsequent burning of those fossil fuels, can result in the warmer temperatures in the atmosphere. This practice results in the transfer of carbon from the lithosphere to the atmosphere.

Key processes for the carbon cycle include photosynthesis, respiration, volcanic activity, ocean uptake, and the burning of fossil fuels and wood. The global carbon cycle encompasses all processes involved in the flow of carbon through its different reservoirs. There are two components to the global carbon cycle: a slow cycle which can take between 100-200 million years to move between rocks, soils, ocean, and the atmosphere and the fast cycle which can overturn carbon in days to weeks.

The slow carbon cycle begins with carbon moving from the atmosphere into rocks through rain. Once in the rocks, river and runoff waters carry carbon ions into the ocean. The ocean has numerous carbon processes which include the breakdown of calcium carbonate (present in shell-building organisms and plankton), marine debris, and other biomatter that precipitates to the bottom of the ocean where shells and sediment cement together to create new rocks, storing the carbon in stone. 80% of carbon containing rocks are made in this way. The slow cycle returns carbon from rocks and the Earth’s crust to the atmosphere through [volcanic activity. When volcanoes erupt, their plumes return carbon to the air and the cycle begins again. The slow cycle is regulated through a positive feedback loop; for example, if CO2 concentrations increase in the atmosphere due to increased volcanic activity, atmospheric temperatures will rise which, in turn, cause more rain, dissolving more rocks and creating more carbon ions that will deposit more carbon on the ocean floor -- a disruption in this regulating feedback loop can take thousands of years to rebalance.

Within this slow cycle, there is a slightly faster component in the ocean. The ocean itself serves as a large carbon reservoir driven by a surface atmosphere-ocean gas exchange. When air meets the water, CO2 gas dissolves into the ocean and is ventilated out; this exchange is driven by wind, currents, and the temperature of the ocean. However, this process can take thousands of years as the carbon dissolves and is mixed through the deepest layers of the ocean, cycling through a process called the thermohaline circulation. Since the Industrial Revolution in 1750, the ocean has begun to take up significantly more carbon, which has led to higher ocean temperatures and acidification (read more on ocean acidification), reducing the ability of this cycle and system to self-regulate. It is estimated that 70-80% of the CO2 expected to be released by human activities will be absorbed by the ocean, with the 30% already absorbed by the ocean to date.

The fast carbon cycle describes the movement of carbon through life forms from processes such as photosynthesis and respiration. Carbon is absorbed into reservoirs through photosynthesis, the process in which CO2 is taken up by plants and plankton and exchanged with O2. CO2 is released from these reservoirs when plants break down sugars for energy, when animals respire, when plants and plankton die, and fires. Typically this CO2 will be released into the atmosphere but some can also be transferred into the soil reservoir from plant roots, during a process known as carbon sequestration. The fast carbon cycle changes with the seasons. An ebb and flow of the cycle is caused by low photosynthesis and release rates in the winter due to diminished plant life and high rates in the summers with new and returning vegetation.


Carbon and the Climate

With the increase in CO2 production due to human activities like fossil fuel burning and deforestation, the natural regulation of this cycle has been thrown off and is causing the Earth to warm. The balance of the global carbon cycle is shifting. Changes in the carbon cycle have happened before during the previous cycles of ice ages and warm periods. Many of these variations are normal, but there is ample evidence that supports that the warming we are experiencing now is anthropogenically caused. Any changes in the carbon cycle impacts all of the sources, sinks, and processes that contribute to it -- the extra carbon needs to go somewhere.

Evidence suggests that about 55% of the excess carbon has been taken up by plants and the ocean while the other 45% has stayed in the atmosphere. It is possible that land and the oceans will take up the majority of the excess CO2, but as much as 20% may stay in the atmosphere. The 25% of CO2 taken up by plants have brought these ecosystems to a tipping point: plants may be reaching the capacity of CO2 they can absorb due to water stress. The ocean, an important carbon sink, has absorbed about 30% of the excess CO2 emissions since the Industrial Revolution. However, the ocean will eventually re-emit this carbon once it has worked its way through the carbon cycle; thus, whatever carbon the ocean absorbs now, it will emit in the future, contributing to future global warming. This is a concept that scientists refer to as committed warming. In the meantime, this influx of carbon in the ocean reservoir is causing a change in ocean chemistry, a process known in ocean acidification, which has already caused severe impacts to marine life, especially marine calcifiers like clams, oysters and coral reefs. In order to reduce the impact that carbon and carbon dioxide have on our environment, a reduction in carbon emissions must take place.

The term “carbon” is frequently interchangeable with “carbon dioxide” in the climate conversation. Due to the various sources of carbon, scientists have come up with a “carbon rainbow” which describes the different sources of carbon.

These terms have been used in conservation and carbon mitigation efforts to make scientific translation easier.

Get Involved and Take Action on Climate Change