Tides are the gradual rise and fall of sea levels caused by the combined effects of the gravitational forces exerted by the Moon and the Sun and the rotation of the Earth. Tides are an entirely separate phenomena than waves (caused by wind) or tsunamis (caused by under-sea earthquakes, volcanic eruptions or landslides). 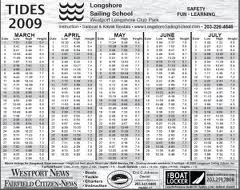 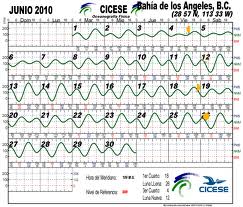 Tides, unlike waves, are predictable months or years in advance. Tide tables, graphs and tide calendars are available from many print and online sources.

Basically, tides are very long-period waves that move through the oceans in response to the forces exerted by the moon and sun. Tides originate in the oceans and progress toward the coastlines where they appear as the regular rise and fall of the sea surface. When the highest part, or crest of the wave reaches a particular location, high tide occurs; low tide corresponds to the lowest part of the wave, or its trough. The difference in height between the high tide and the low tide is called the tidal range.

A horizontal movement of water often accompanies the rising and falling of the tide. This is called the tidal current. The incoming tide along the coast and into the bays and estuaries is called a flood current or flood tide; the outgoing tide is called an ebb current or ebb tide. The strongest flood and ebb currents usually occur before or near the time of the high and low tides. The weakest currents occur between the flood and ebb currents and are called slack tides. In the open ocean tidal currents are relatively weak. Near estuary entrances, narrow straits and inlets, the speed of tidal currents can reach up to several kilometers per hour.

In 1687, Sir Isaac Newton explained that ocean tides result from the gravitational attraction of the sun and moon on the oceans of the earth. Although the sun is much larger than the moon, because of the much greater distance from the earth to the sun, the sun’s tide-generating force is about half that of the moon.

Because the Earth rotates through two tidal “bulges” every lunar day, coastal areas experience two high and two low tides every 24 hours and 50 minutes. High tides occur 12 hours and 25 minutes apart. It takes six hours and 12.5 minutes for the water at the shore to go from high to low, or from low to high.

Although the moon is a major influence on the Earth’s tides, the sun also generates considerable tidal forces. Solar tides are about half as large as lunar tides and are expressed as a variation of lunar tidal patterns, not as a separate set of tides. When the sun, moon, and Earth are in alignment (at the time of the new or full moon), the solar tide has an additive effect on the lunar tide, creating extra-high high tides, and very low, low tides—both commonly called spring tides. One week later, when the sun and moon are at right angles to each other, the solar tide partially cancels out the lunar tide and produces moderate tides known as neap tides. During each lunar month, two sets of spring tides and two sets of neap tides occur.

Just as the angles of the sun, moon and Earth affect tidal heights over the course of a lunar month, so do their distances to one another. Because the moon follows an elliptical path around the Earth, the distance between them varies by about 31,000 miles over the course of a month. Once a month, when the moon is closest to the Earth (at perigee), tide-generating forces are higher than usual, producing above-average ranges in the tides. About two weeks later, when the moon is farthest from the Earth (at apogee), the lunar tide-raising force is smaller, and the tidal ranges are less than average. A similar situation occurs between the Earth and the sun. When the Earth is closest to the sun (perihelion), which occurs about January 2 of each calendar year, the tidal ranges are enhanced. When the Earth is furthest from the sun (aphelion), around July 2, the tidal ranges are reduced.

Learn more about tides and their effect on surf in this article from The Inertia.


What are King Tides?

King tide is a popular term used to refer to an especially high tide. King tides are simply the very highest tides. Conversely, the low tides that occur at this time are the very lowest tides.

The king tides occur when the earth, moon and sun are aligned at perigee and perihelion, resulting in the largest tidal range seen over the course of a year. Alignments that are ‘near enough’ occur during approximately three months each winter and again for three months in the summer. During these months, the high tides are higher than the average highest tides for three or four days. Winter king tides may be amplified by weather and ocean conditions making these events more dramatic. In the northern hemisphere, the term king tide is used to describe each of these winter high tide events.

The King Tide Photo Initiative educates people about the potential effects of rising sea levels due to climate change. During this initiative, organizations reach out to the general public to photograph local areas inundated by king tides and then encourage them to post the photos online for others to see. These photos can help people visualize the way sea level rise may affect our communities in the future. The photos generate information that can be used by coastal communities to inform people about the anticipated effects of sea level rise and perhaps lead to policy change and local adaptation.

King tides are a natural part of the tidal cycle and are not a result of climate change, but they do provide a view of the locally highest tides, which may occur more frequently as sea levels rise due to the effects of climate change.