Upwelling is a process in which deep, cold water rises toward the surface. Winds blowing across the ocean surface push water away. Colder water then rises up from beneath the surface to replace the water that was pushed away. 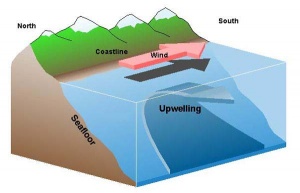 Upwelling occurs in the open ocean and along coastlines. The reverse process, called “downwelling,” also occurs when wind causes surface water to build up along a coastline and the surface water eventually sinks toward the bottom.

Upwelling is most common along the west coast of continents (eastern sides of ocean basins). In the Northern Hemisphere, upwelling occurs along west coasts (e.g., coasts of California, Northwest Africa) when winds blow from the north (causing transport of surface water away from the shore). Winds blowing from the south cause upwelling along continents' eastern coasts in the Northern Hemisphere, although it is not as noticeable because of the western boundary currents.

This graphic shows how displaced surface waters are replaced by cold, nutrient-rich water that “wells up” from below. (NOAA National Ocean Service)