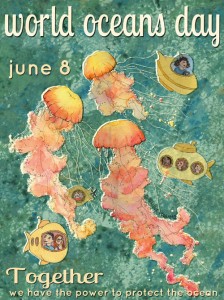 World Oceans Day is celebrated on June 8 every year. It is a day when people around the planet honor the body of water which links us all, for what it provides humans and what it represents. The Ocean Project and the World Ocean Network have helped promote and coordinate this event since 2002. A new partner in promoting and celebrating World Oceans Day is One World One Ocean.

World Oceans Day, which had been unofficially celebrated every June 8 since its original proposal in 1992 by Canada at the Earth Summit in Rio de Janeiro, Brazil, was officially recognized by the United Nations in 2008.

Themes for World Oceans Day have been: