What Is Artificial Turf 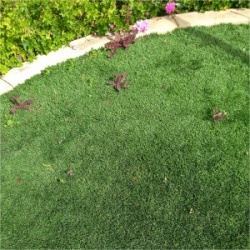 Artificial turf is a petroleum-based product promoted as a water- and maintenance- free alternative to conventional turf lawns. Before artificial turf is laid down, the soil below it is compacted. Then, a layer of sand or decomposed granite (or sometimes concrete) is put on top of the soil and compacted so the turf lays flat. Next, a layer of plastic may be applied, followed by the artificial turf being stapled down. Some artificial turf manufacturers advertise that the turf itself is permeable, but they do not include in their analysis that earth beneath it is generally not.

Pollutants build up on artificial turf like they would on any hard surface. The pollutants are washed off during the rainy season or when the turf is hosed for regular cleaning and cooling by property owners and managers (e.g., to remove pet poop, to cool down for playing on). The plastic turf also absorbs and radiates heat from the sun, contributing to the "urban heat island" effect, which then tends to increase the use of fossil fuels to keep us cool in the form of increased air conditioning use, particularly in areas like the San Fernando Valley. One study records artificial turf surface temperatures exceeding asphalt by 37 degrees and natural turf by 86 degrees (Williams and Pulley, Brigham Young University, 2002). These elevated temperatures require the use of supplemental water to cool the turf and maintain functionality and also heat up surrounding plants, buildings and communities, often killing the plants. Artificial turf may also harbor microbes that may are harmful to humans and pets. Both the hosing down (sending pollutants to waterways as dry weather runoff) and the increased heat island effect are practices contrary to the principles of the watershed approach and others' programs such as Surfrider Foundation’s Ocean Friendly Gardens Program, CPR - Conservation, Permeability and Retention.

There are several other challenges with artificial turf:

Several cities or water agencies such as the City of Los Angeles, the City of Santa Rosa (fact sheet), the Santa Clara Valley Water District (fact sheet), the City of Santa Monica (fact sheet), the San Diego County Water Authority, the Castaic Lake Water Agency, the City of Ventura, the Bay Area Water Supply and Conservation Agency (fact sheet), and the East Bay Municipal Utility District recognize that there are issues with artificial turf and do not allow it to be used for their turf replacement rebate programs. There are better alternatives. The Surfrider Foundation and fellow non-profits such as TreePeople and for for-profits such as G3/Green Gardens Group support living landscapes over artificial turf. For example, the West LA/Malibu Surfrider Chapter was part of a successful collaboration to encourage the Los Angeles Department of Water and Power to replace turf grass at its facilities with an Ocean Friendly Garden (the same as the watershed approach).

There are three landscape-related environmental issues that demonstrate how artificial turf exacerbates rather than solves water resource problems: water pollution caused by urban and agricultural runoff, air pollution caused by excess carbon dioxide, and the loss of the vital functions of living soil:

Water Pollution - Urban runoff is the #1 source of pollution to coastal waterways and the beach. Anything that ends up on impermeable surfaces – trash, lawn chemicals, animal waste or automotive chemicals – is flushed off during rain events or during dry days through sprinklers. The runoff is then directed into stormdrains, where it flows untreated to waterways and the ocean. While some artificial turf has small holes in it to allow some water to pass through, the compacted base beneath it can prevent infiltration. Thus, artificial turf can act like concrete, asphalt and other impermeable surfaces in this regard.

Carbon Dioxide (CO2) – CO2 is a greenhouse gas and a major contributor to climate change and ocean acidification. Through photosynthesis, plants absorb CO2 and release oxygen (O2), which we breathe. The plants use the carbon to build their bodies, and exchange some of the carbon with soil organisms for “plant available food.” The soil organisms can bind up the carbon with soil “glues,” keeping it locked in soil. Artificial turf offers none of the CO2-absorbing advantages of a natural landscape. Also, since artificial turf is also a petroleum-based product, CO2 is released into the atmosphere as fossil fuels are burned during its production. Our oceans act as a sink for CO2 and the result is increasingly acidic conditions that have harmful impacts on many different marine species including the weakening of shells for commercially and ecologically important shellfish species.

Diminishes Living Soil and Plants - Living soils have what G3/Green Gardens Group calls OWL: oxygen, water and life. By directing polluted water to soil, microorganisms filter water pollutants by “eating” them. These organisms and organic matter help create soil structure, with water and air filling in spaces which plants can tap during dry months (conveyed by soil organisms). Also, the carbon sequestered by soil organisms attracts water molecules. Plants, especially large ones like trees, also hold onto water. Lastly, plants and soil evapo-transpire, releasing water vapor, which feeds the water cycle and contributes to clouds releasing rain. When the soil is saturated and can’t hold any more water, the excess travels further down into aquifers or moves sideways and helps maintain flows in streams, rivers and other waterways. Plant leaves that die and drop become mulch, holding in soil moisture, suppressing weeds and feeding soil microorganisms. Soil organisms also change atmospheric nitrogen gas into a form that can be used for plant nutrition.

This cycle of carbon, air, and water is the only land-based carbon sink known, helping to cut down on the amount of carbon oceans absorb and reducing ocean acidification. Once soil is ripped apart and compacted, such as under an artificial turf lawn, living organisms die and they can no longer provide services to clean and absorb water or carbon.

The best form of water conservation uses climate appropriate plants, living soil (compost and plant-based mulch), and directs rainwater into the landscape. These are the principles behind Surfrider Foundation’s Ocean Friendly Gardens CPR: Conservation, Permeability and Retention. Ocean Friendly Gardens are consistent with the term, watershed approach, which sees every site as a mini-watershed to both conserve and protect clean water – and achieve multiple other benefits, e.g., carbon sequestration, green waste reduction and wildlife habitat creation. A watershed is an area in which all the water that flows on top or below it goes to the same place, usually the ocean in coastal areas. Your home property is a mini-watershed. Groups like the California Urban Water Conservation Council, for which Surfrider is a Board Member, are lead proponents of the watershed approach. (Note: similar to OFGs, rain gardens also support these principles, though these tend to be a best management practice to receive water from one rain gutter downspout as opposed to considering the whole garden to be a best practice.)

The installation of artificial turf goes against the holistic, watershed approach that the Surfrider Foundation advocates to promote clean water and healthy communities along the coast. Artificial turf compromises critical landscape functions and should not be considered as a viable alternative to living landscapes. It under-performs on promised water and maintenance savings and fails to deliver the tangible and quantifiable ecosystem services of living landscapes. There does not seem to be a good reason to use water agency rebates for artificial turf.