Driving on the beach is a long-standing tradition in many areas of the United States, including Cape Cod National Seashore in Massachusetts, portions of the New Jersey shore, North Carolina’s Outer Banks, Georgia’s islands, certain areas in Florida, North and South Padre Islands and other areas in Texas, and several areas in Oregon and Washington, including the Long Beach Peninsula shoreline. In many of these areas, access to the beaches for swimming, surfing, fishing or just a day at the beach would be very difficult, if not impossible without allowing beach driving.

It is also widely recognized that beach driving can cause serious ecological impacts by potentially destroying nesting areas for sea turtles and birds such as the piping plover and damaging or destroying vegetation and dunes. Shore erosion can be accelerated by careless beach driving and vehicles on the beach can be a safety hazard to beach goers.

"Beach driving has been found to reduce the quality of loggerhead nesting habitat in several ways. In the southeastern United States, vehicle ruts on the beach have been found to prevent or impede hatchlings from reaching the ocean following emergence from the nest (Hosier et al. 1981, p. 160; Cox et al. 1994, p. 27; Hughes and Caine 1994, p. 237). Sand compaction by vehicles has been found to hinder nest construction and hatchling emergence from nests (Mann 1977, p. 96). Vehicle lights and vehicle movement on the beach after dark results in reduced habitat suitability, which can deter females from nesting and disorient hatchlings. If driving occurs at night, sea turtles could be run over and injured. Additionally, vehicle traffic on nesting beaches contributes to erosion, especially during high tides or on narrow beaches where driving is concentrated on the high beach and foredune.

Beach driving is prohibited on the majority of nesting beaches in the southeastern United States by law, regulation, management plan, or agreement. However, some vehicular driving is still allowed on private, local, State, and Federal beaches for recreation, commercial, or beach and natural resource management activities. In 1985, the Florida Legislature severely restricted vehicular driving on Florida's beaches, except for cleanup, repair, or public safety. Five counties were exempted from the legislation and are allowed to continue vehicular access on coastal beaches due to the availability of less than 50 percent of its peak user demand for off-beach parking. The counties affected by this exception are Volusia, St. Johns, Gulf, Nassau, and Flagler Counties, as well as limited vehicular access on Walton County beaches for boat launching. Volusia and St. Johns Counties, Florida, developed HCPs that minimize and mitigate the impacts of County-regulated driving and USFWS issued incidental take permits under section 10(a)(1)(B) of the Act. Gulf County has submitted an HCP to the Service in conjunction with an application for a section 10(a)(1)(B) permit that minimizes and mitigates the impacts of County-regulated driving on the beach." 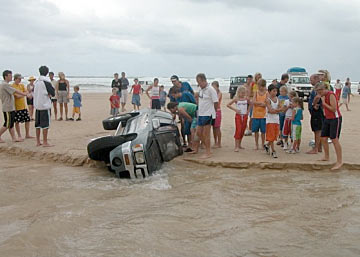 In recognition of the potential impacts of beach driving, most areas that allow this practice regulate it in some way, including:

Volusia County in Florida is home of Daytona Beach and New Smyrna Beach, where there is a tradition of beach driving dating back to the early days of the automobile. 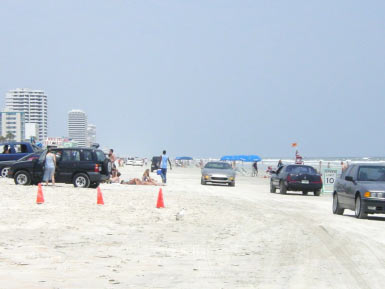 Volusia County, like many other areas in the country, has tried to balance the need for and history of beach driving versus concern for the coastal environment by designating their beaches as Natural, Transitional and Urban.

Here's a 2012 update on beach driving in Volusia County. The new rules are no texting while driving, keep your windows down, and there are three new one-way traffic areas.

In Texas, fifty-five miles of the beach at Padre Island National Seashore are accessible strictly via four-wheel-drive vehicle; 8.5 miles are available for standard passenger vehicles. 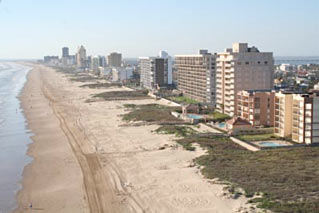 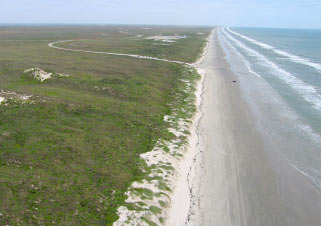 One of the most high-visibility disputes regarding beach driving involves potential restrictions or prohibitions on beach driving at the Cape Hatteras National Seashore. 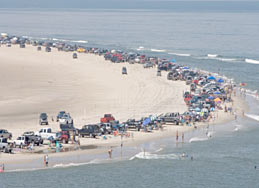 Beach driving in North Carolina is primarily controlled either by local governments (at the town level, or county level in the case of Currituck Co.), by the NC Division of Parks and Recreation (e.g., at the Fort Fisher state park beach), or the National Park Service (e.g., at Cape Hatteras National Seashore). Most towns only permit beach driving between approximately Oct. 1 and April 30. This is primarily to protect bird and sea turtle nests from vehicular traffic during their nesting season. Some beaches have year-round access, however. Many towns also require off-roaders to pay a fee and place a sticker on their vehicle. Driving on the dunes is not allowed on any NC beaches.

Cape Hatteras National Seashore generally allows beach driving year-round. See their website or this one for more information on regulations.

In July 2007 U.S. District Judge Terrence W. Boyle issued an order which stated that because Cape Hatteras National Seashore did not have regulations to govern off-road vehicle (ORV) traffic, operating a vehicle on the seashore "without prior authority" was punishable by fines up to $5,000 and six months in prison. In response, a spokesperson for Cape Hatteras stated that with the exception of isolated closures for natural resource protection and pedestrian safety, ORV traffic would be allowed on the seashore while attorneys for the National Park Service reviewed the court order.

As required by law, the National Park Service (NPS) is currently undertaking a process to develop future rules for driving at Hatteras. However, NPS admits the process will take at least three years to complete. Some scientists believe that many species could be eliminated from the Seashore in that time. Because of this extended delay in developing a plan for management of ORV access, two environmental groups filed a lawsuit to force immediate action.

In February 2008, the Southern Environmental Law Center (SELC), representing Defenders of Wildlife and the National Audubon Society, asked a federal judge to limit beach driving on approximately 12 percent of the seashore identified by the Park Service's scientists as being most critical to nesting shorebirds. SELC asked the judge to halt driving on this portion of beach pending the outcome of a suit SELC filed in October, 2007.

That suit sought to require the Park Service to implement a plan to manage beach driving that will also protect the resources of the region. The goal is development of a management plan that will continue to allow access to Hatteras by vehicle, but will control use to protect wildlife, safety and the overall environment of the Outer Banks.

The Outer Banks Chapter of Surfrider Foundation is one of the parties working to achieve a balanced resolution of the beach driving issue at Cape Hatteras National Seashore. The chapter issued the following statement:

The Outer Banks Chapter of the Surfrider Foundation recognizes the unique ecological, recreational and economic value of the Cape Hatteras National Seashore. We further recognize that beaches are a public resource and should be held in the public trust for their preservation. We understand that for decades the Park Service has allowed access to Cape Hatteras National Seashore beaches by Off Road Vehicles (ORV) with minimal restriction or oversight and that if not regulated correctly ORV use may detrimentally affect migratory species that nest in the area. The Outer Banks Chapter supports beach preservation and protection efforts, but feels that a temporary and or permanent ban on ORV access to these beaches could have an immediate detrimental impact on the Outer Banks economy, and severely limit public access to groups that appreciate, use, and support the protection of these coastal resources. We believe that a balance between access and preservation can be achieved.

It is difficult for one that has not spent significant time on the Outer Banks to consider how limited access to beaches would become without ORV use, access that is the very reason that people from all over the world come to the Outer Banks to visit. In our small community where much of the oceanfront has been developed by homes, this small stretch of National Park is truly one of the last protected places to enjoy the unique resources on Hatteras Island. Hatteras Island offers world class surfing and fishing, much of which can be attributed to its remote location that is accessible only by ORVs. At this time the Outer Banks Chapter of Surfrider Foundation believes that allowing continued access with improved management of ORV use to the National Seashore is the optimal solution for this area.

The Outer Banks Chapter implores all parties involved in this issue to find a balance between access, protection and preservation. We recommend managing access of these areas through a combination of permitting, limiting the number of vehicles, and closures when necessary to protect the migratory species that use this area seasonally. The Outer Banks Chapter of Surfrider Foundation supports protection and preservation, and in this unique situation does support the reasonable use of Off Road Vehicles to allow public access this area.

A tentative agreement settling the lawsuit was announced on April 16, 2008. The settlement allows driving on large areas of beach, but seasonally restricts vehicle use in several spots popular with both birds and fishermen. The settlement details areas to be restricted in 2008 to protect bird and turtle nesting areas. Among its requirements: bird nesting areas can't be made smaller to accommodate vehicles if erosion cuts off vehicle access. The park service, by March 15 of each year, must mark nesting areas on Bodie Island Spit, Cape Point, South Beach, Hatteras Spit, North Ocracoke and Ocracoke South Point. The park service must also set aside specific protection buffers around nesting areas for plover, the least tern, the oystercatcher and other waterbirds. The vehicle buffer is 1,000 meters for plover chicks, the highest level of protection. Officials also have the authority to expand the protected areas if they believe there has been vandalism of fencing, nests or plants. To protect turtles, the park service must close beaches to night driving between of 10 p.m. and 6 a.m. from May 1 to Sept. 15 and allow night driving only under educational permits between Sept. 16 and Nov. 15.

In early February 2012 the Cape Hatteras Access Preservation Alliance (CHAPA) filed a lawsuit against the federal government agencies in the U.S. District Court for the District of Columbia in an effort to stop the Park Service from implementing its off-road vehicle management plan and ORV final rule, which became effective on February 15. Here is an Update on ORV Management Plan for Cape Hatteras National Seashore from the National Park Service.

Can I Drive on Oregon Coast Beaches? Rules, Regulations for Cars, Vehicles

It's offseason, so 4x4s have taken over South Jersey's beaches

This article is part of a series on Beach Access looking at policies, laws, regulations and conditions which can affect the public's ability to access the coast.

For information about laws, policies and conditions impacting beach access in a specific state, please visit Surfrider's State of the Beach report to find the State Report for that state, and click on the "Beach Access" indicator link.