Nuclear energy is a complex and controversial issue, with severe ramifications to human and environmental health if managed improperly.[1] Though nuclear waste, the byproduct of nuclear energy generation, does not pose as great a risk as operating reactors, the danger from potential exposure to high level radioactive waste is still substantial. As of April 2018, there are 31 independent spent fuel storage installations (ISFSI)[2] storing 33,892 radioactive spent fuel assemblies on the US coastline.[3] With increasing rates of coastal erosion, sea level rise, and likelihood for more frequent and severe storms due to climate change, the storage of nuclear waste on the coastline is understandably concerning.

Trend Towards Coastal Storage
Nuclear generation facilities use fission to generate electricity, but this process generates an immense amount of heat, and over time, spent fuel assemblies (best known as nuclear waste). During operation, nuclear facilities require roughly 800 gallons of water per mega-Watt hour of electricity produced - for cooling. In fact, nuclear requires more water withdrawal than most other electricity generating methods (including coal, oil, gas, biofuel, and solar thermal).[4] To use an affordable process called direct or “once through” cooling, many nuclear facilities were built on the coastline for easy access to the ocean’s vast water resources.

Waste created during fission doesn’t have anywhere to go, as the US federal government has yet to find and certify a viable permanent nuclear waste repository (originally intended to occur by 1998).[5] As such, waste generated at coastal nuclear power plants remain at coastal nuclear power plants, either in cooling pools or in dry storage, called independent spent fuel storage installations (ISFSI’s). The 31 licensed and operating ISFSI’s store a total of 33,892 radioactive spent fuel assemblies in dry storage canisters or casks on the US coastline, with 55,833 spent fuel assemblies still in cooling ponds.[6] Some ISFSI's are within 100 feet of the beach, in areas with active coastal erosion and storm exposure. That’s almost 88,300 spent nuclear fuel assemblies stored on the US coastline, with no current plan for removal or transport to inland storage. 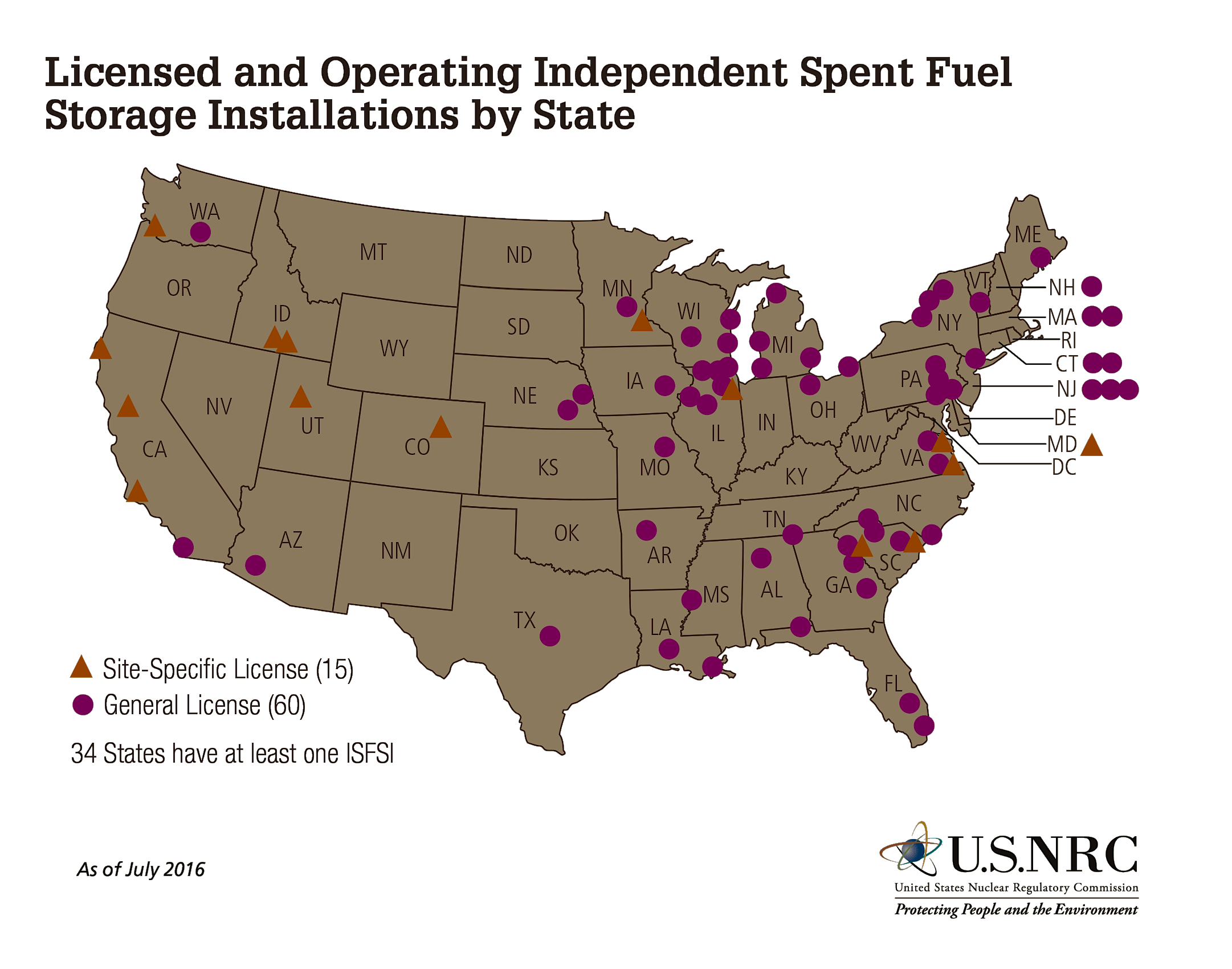 Figure 1. Licensed and Operating ISFSI's as of July 2017. Map by the Nuclear Regulatory Commission identifying currently licensed US ISFSI's.

Background on Nuclear Energy Waste Creation and Storage Issues
During the fission process, spent uranium oxide assemblies turn radioactive, and contain harmful water-soluble caesium-137 and strontium-90. Every three to four years, uranium decays in operating nuclear generation plants, and fuel needs to be replaced. Spent fuel assemblies (referred to as “Spent fuel”) are placed in spent fuel pools where they are stored and cooled for five to seven years, after which they are supposed to be transported to a federal permanent repository and stored in dry hardened storage casks.[7] The US Nuclear Regulatory Commission (NRC) expected to have a federal permanent dry storage repository by 1998, yet as of 2017, there is still no permitted federal permanent repository.

In lieu of a permanent storage facility, nuclear generating plants use the cooling pools as additional storage and significantly increased the amount of spent fuel rods and time stored in pools. This crowding of extremely hot nuclear fuel rods increases the potential for a fire if there is not sufficient coolant in the pools, which could release radioactive volatiles and particulates.[8] Without any more cooling pool storage room (over 70% of US based nuclear fuel assemblies are in pools)[9] and considering the severe risk of crowding in cooling pools, there is a need to transfer cooled spent fuel to dry storage. Dispersing fuel rods into separate casks reduces the threat of fire, allows casks to be passively air cooled, and eliminates the long-term reliance on electricity, coolant, water, etc.[10] There is scientific consensus that nuclear generating facilities, both decommissioned and operating, need to move cooled spent fuel from storage ponds to dry storage as soon as possible, yet where and how has yet to be agreed upon.

Future of a Permanent Repository
The Nuclear Waste Policy Act required the Secretary of the Interior to nominate five suitable candidate sites that meet specified site characterization guidelines for permanent high level waste disposal, pick the three best candidates, and then conduct thorough environmental assessments.[11] The intent was to choose the best possible option ensuring the highest likelihood of retaining hazardous materials. Political pressure resulted in many states removing themselves from the list, and ultimately left Yucca Mountain of Nevada as the selected site. This selection became official in 1987, when congress amended the Nuclear Waste Policy Act of 1982.[12] After $11 billion spent[13] and years of thorough analysis at Yucca, the site did not meet geologic and hydrologic requirements, with findings of high likelihood for corrosion and contamination of groundwater.[14] The DOE proposed remotely installing titanium drip shields over each assembly to prevent against corrosion from condensed steam: however, the amount of titanium necessary is estimated be 30% of the annual US production of titanium.

In 2011, Obama pulled funding from Yucca Mountain. There have been recent attempts to revive Yucca, yet it may be time to restart the process, remove political pressure from the playing field, and restart a nationwide search for a permanent repository. As a result of the Blue Ribbon Commission on America’s Nuclear Future, in 2013 the Department of Energy announced a strategy to construct a pilot interim storage facility by 2021, construct a larger interim storage facility by 2025, and construct a new permanent repository that would be available by 2048.

Onsite Interim Storage
Initially ISFSI’s, temporary dry storage sites built on or near nuclear generating plants, were granted 20-year licenses, but some operations have received extensions during renewals for 40 additional years. For extensions to be approved facilities must provide an Aging Management Program (AMP). For general monitoring, 10 CFR 72.122(h)(4) states “periodic monitoring is sufficient provided that periodic monitoring is consistent with the dry spent fuel storage cask design requirements. The monitoring period must be based upon the spent fuel storage cask design requirements.” Specific regulations for ISFSI are outlined in the NRC Standard Review Plan for Spent Fuel Dry Storage Systems at a General License Facility.

Consolidated Interim Storage
As a method to temporarily consolidate and store spent fuel from multiple nuclear generating stations in areas more geologically stable, away from eroding coastlines, carefully designed, and heavily monitored, there are currently two applications for consolidated interim storage facilities (CISF’s). CISF’s are intended to provide temporary storage while the federal government works to establish a permanent repository. The NRC cites two current CISF applications, one from Waste Control Specialists, LLC in Texas and another from Holtec International in New Mexico.[15] The main concerns frequently referenced with CISF’s are the assurance that the receiving community gives consent, the need to transport waste twice, and the potential for “interim” to become permanent without meeting the long-term geologic stability specifications. Additionally, the proposed Texas CISF is in close proximity to the Ogallala reservoir, a drinking water source spanning eight states and providing water to almost a fifth of the nation’s agriculture land (wheat, corn, cotton and cattle).[16] Waste Control Specialists already operate four facilities in Texas, with licenses to dispose of Class A, B, and C Low Level Radioactive Waste (LLRW – contaminated byproduct like clothing, rags, needles, etc) and hazardous waste; but nothing yet certified for High Level Radioactive Waste (HLRW – spent nuclear waste).

Types of Storage and Potential for Corrosion
The two main types of dry storage are thick steel bare fuel casks, in which spent fuel assemblies are directly placed, and canister-based casks, in which spent fuel assemblies are placed into a thin steel canister, sealed, and then placed into a thick concrete over pack. These storage types are referred to as “thick-walled” and “thin-walled” casks.[17] According to the DOE nuclear energy inventory, of the 2,277 dry storage casks in use in the United States, just 9% (204 casks) are thick bare fuel casks. The overwhelming majority, 91%, of dry storage casks are canister-based, referred to as "canisters", totaling 2,073 canisters loaded across 70 plants.[18]

Material design varies but “[t]ypically, concrete, lead, and steel are used to shield gamma radiation, and polyethylene, concrete, and boron-impregnated metals or resins are used to shield neutrons. Criticality control is provided by a lattice structure, referred to as a basket, which holds the spent fuel assemblies within individual compartments in the cask“.[19] When comparing storage casks its important to consider some key elements (1) the amount of assemblies stored in each canister (2) vulnerability to stress corrosion cracks (3) ability to detect and enclose potential cracks (4) thermal approval limits of the storage cask and (5) the burnup level of stored fuel assemblies.
Note: Burnup is the amount of energy produced by uranium in a nuclear generating facility, measured in gigawatt-days per metric ton uranium (GWd/MTU). The NRC notes that average burnup used to be 35 GWd/MTU, but that has increased to 45 GWd/MTU. The higher the burn up, the more cooling time required for fuel assemblies.

The US Department of Energy recognizes that stainless steel canisters are more prone to Chloride-Induced Stress Corrosion Cracking (CISCC) than bare fuel storage casks, and that as of now there is no effective way to monitor and identify CISCC in filled canisters. The California Coastal Commission stated

A July 16 2018 panel of nuclear policy experts and community representatives provide a debriefing on the issue of stranded nuclear waste and concerns regarding the decommissioning of nuclear power plants across America. A recording of the 90-minute presentation and panel discussion can be found at the Environmental and Energy Study Institute.

Surfrider’s Policy on Nuclear Waste Storage
Surfrider is opposed to permanent or long-term storage of radioactive waste at areas with close proximity to the coastline, high susceptibility to geological instability and close proximity to a densely populated area. Surfrider is actively engaged in advocating to remove the waste at one such site, San Onofre Nuclear Generating Station, as quickly as possible to a federally approved, geologically secure, consent based permanent repository within a specific timeline. Learn more about Surfrider’s efforts regarding the removal of nuclear waste from our coastlines here.