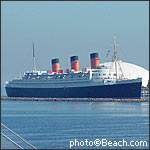 Cruise ships have been described as "floating cities" and like cities, they have a lot of pollution problems. Their per capita pollution is actually worse than a city of the same population, due to weak pollution control laws, lax enforcement, and the difficulty of detecting illegal discharges at sea. Cruise ships impact coastal waters in several US states, including Alaska, California, Florida, and Hawaii.

All cruise ships generate the following types of waste:

According to the Bureau of Transportation Statistics, a 3,000-passenger cruise ship (considered an average size, some carry 5,000 or more passengers) generates the following amounts of waste on a typical one-week voyage:

In addition to producing and releasing these waste products, cruise ships can also have considerable damage to surrounding ecosystems due to their sheer size. While there are cruise ships of all sizes, there is a notable trend for cruise ships to get larger, which can require ports to increase the frequency and depth of dredge projects (literally digging their channels and ports deeper to accommodate larger, deeper vessels) which can destroy local habitats. Even without dredging, the passage of cruise ships can impact bottom dwelling life and cause severe turbidity by stirring up sediment. See video below for recorded footage of coral reefs getting smothered by sediment during a cruise ship passage in Florida.


Finally, these ships take in large quantities of ballast water, which is seawater pumped into the hulls of ships to ensure stability. This water is typically taken in at one port and then discharged at the ship's destination, which can introduce invasive species and serious diseases into U.S. waters. A typical release of ballast water amounts to 1,000 metric tons.

Cruise ships (and other ships) are required to have "marine sanitation devices", which are designed to prevent the discharge of untreated sewage. Sewage must be treated to specified standards before discharge if the ship is stationary of if it is within a specified distance (generally three miles) of shore. When the ship is beyond three miles from shore, there are no restrictions on the release of untreated sewage.

There are no restrictions on the release of gray water, except in the Great Lakes.

Discharge of oil or oily water into US navigable waters, adjoining shorelines or waters which may affect natural resources within 200 miles of shore is prohibited, unless the oily water is passed through an oil-water separator designed to reduce the oil concentration to 15 parts per million (ppm) within 12 miles of shore or within 100 ppm beyond 12 miles from shore. Ships are required to keep Oil Record Books to record their disposal of oily residues and bilge water.

Hazardous wastes should be properly packaged and labeled and disposed in permitted on-shore facilities, but the applicability of the Resource Conservation and Recovery Act (RCRA) to ships and Cruise Lines is not clear.

The dumping of garbage at sea is prohibited within certain distances from shore, generally ranging from 3 to 25 miles. Dumping of plastic is prohibited everywhere at sea, and all discharge or incineration of garbage must be recorded in a Garbage Record Book.

Although there are pending new rules from the EPA on diesel engine emissions (e.g. sulfur scrubbers and scrubber effluent), the proposed new rules are still much weaker than for land-based emission sources.

Globally, the International Maritime Organization (IMO) is a branch of the United Nations that regulates global shipping, and after a modification by the 1978 Marine Pollution Convention (MARPOL) Protocol, also regulates ship emissions. In 2005, IMO established goals to reduce nitrous oxides, sulfur oxides and particulates from ship engines. The organization later went further by establishing “Sulfur Emission Control Areas” (SECAs) in certain regions, include US waters. SECAs require more stringent sulfur oxide emission reductions through the use of low sulfur content fuel. By 2015, IMO required that inside of SECAs, ships are limited to the use of 0.1% sulfur fuel content by mass, and by 2020, all ships must limit their sulfur fuel content by mass to 0.05%, globally. These regulations, combined with regulations for nitrogen oxide limitations in “Nitrogen Oxide Emission Control Areas” or NECAs are expected to result in a “significant reduction of engine emissions.”[9]

However, instead of just switching to low sulfur content fuels, many ships are instead opting to continue to use “heavy fuel oil” but with onboard “sulfur scrubbers” that limit sulfur emissions. This decision to use sulfur scrubbers with heavy fuel oil helps reduce sulfur emissions, but at the cost of harming water quality by releasing polluted sulfur scrubber washwater effluent into the surrounding waterways. A summary of concerns regarding the use of scrubbers was presented to the IMO Marine Environment Protection Committee by Professor John B. Heywood and Dr. Emmanuel Kasseris in February 2019, and provided below.[10]

"There is a need to evaluate the environmental impact of marine [exhaust gas cleaning systems, or] EGCS in light of IMO's regulations on fuel sulphur limit coming into effect in 2020. According to these regulations, scrubbers are considered an equivalent alternative to using low sulphur fuel. Professor John Heywood and Dr. Emmanuel Kasseris of the Massachusetts Institute of Technology (MIT), United States, performed an extensive literature review on environmental impacts of scrubbers and have concluded that there are two areas where there is cause for concern, or at least justification for further scientific investigation.

The first issue is the impact of scrubber effluent discharge on marine life and biogeochemical processes. This is especially concerning when discussing open-loop scrubbers which constitute the vast majority of installed [Exhaust Gas Cleaning Systems or] EGCS. Scrubber effluent contains pollutants such as heavy metals and polyaromatic hydrocarbons (PAH), among others. It is also acidic, which can affect ocean chemistry and marine life. Although ocean dispersion modelling of scrubber effluent studies has been very limited, there is an almost complete consensus in the literature that there is cause for concern and justification for further scientific investigation.

The second issue concerns whether ships equipped with scrubbers are truly equivalent to ships using low sulphur fuel regarding air emissions. In terms of gaseous sulphur oxides, scrubbers are effective in removing them. In terms of particulate emissions however, there are strong indications in the literature that ships equipped with scrubbers may not be equivalent to burning low sulphur fuel. This is mostly due to the fact that scrubbers may not be as efficient in removing small (less than 100 nm diameter) particulates (nucleation mode) that consist mostly of sulphuric acid, water and condensable organic molecules. There is limited work in this area and it needs to be investigated further. However, there are enough indications that there may be issues with current scrubber designs and regulations in terms of delivering emissions that are completely equivalent to those of low sulphur fuel.”

The cruise ship industry does not have a good record of compliance with the existing weak regulations.

Proposed Regulations and Efforts to Prevent Pollution from Cruise Ships
Pollution from cruise ships is totally preventable. The technology exists. We simply need effective regulations that are enforced. In U.S. waters, direct discharges are regulated under federal and state laws. In international waters, discharges are regulated under the International Convention for the Prevention of Pollution from Ships (MARPOL) but only apply to ships flagged under countries that are signatories to MARPOL.

The Bluewater Network (now Friends of the Earth) issued a report on Cruise Ship Pollution in March 2000 that urged the EPA to conduct an in-depth review of the impact of waste discharges from cruise ships, examine the existing applicable regulations, develop recommendations on how to better control cruise ship waste discharges, and ensure that the regulations were implemented. Surfrider joins Friends of the Earth, The Ocean Conservancy, and other environmental groups in urging EPA to respond to the March 2000 request to identify and regulate pollution from cruise ships.

In California, a protest by The Ocean Conservancy and other environmental groups resulted in an agreement by Princess Cruises not to discharge wastewater while located in the Monterey Bay National Marine Sanctuary. More recently, it was announced in August 2010 that new federal regulations, scheduled to go into effect in 2011, would bar cruise vessels and large commercial ships from discharging sewage within three miles of California's coastline. On February 9, 2012, EPA finalized a rule in response to an application from the State of California, and established a No Discharge Zone (NDZ) for large vessels in all California marine waters that will go into effect in March 2012. More info.

In Maine, a bill was introduced in March 2003 which would make Maine one of the first states to establish statewide wastewater quality standards for passenger ships by prohibiting ships from dumping any partially treated sewage or other wastewater in or around Portland Harbor.

More robust information on current laws and regulations regarding cruise ship pollution in the US are available in the Congressional Research Service 2008 Report to Congress, Cruise Ship Pollution: Background, Laws and Regulations, and Key Issues.

“This report describes the several types of waste streams that cruise ships may discharge and emit. It identifies the complex body of international and domestic laws that address pollution from cruise ships. It then describes federal and state legislative activity concerning cruise ships in Alaskan waters and activities in a few other states, as well as current industry initiatives to manage cruise ship pollution. Issues for Congress are discussed.”

Recommended Local Policies and Cruise Line Efforts to Prevent Environmental Damage
Increasingly large cruise ships are attempting to come into established ports and channels that are just too small for the vessel. In order for vessels to port, the local community has to conduct harmful dredge projects, and sometimes even sensitive habitat "relocation" efforts. For instance, in Miami, PortMiami is expanding to accommodate Disney and MSC Cruises, and as such the city is relocating one of the last intact urban coral reefs in South Florida before it destroys the area the reef currently encompasses.

To avoid these and other harmful environmental impacts, cruise lines and ports should:

Individual Actions and Consumer Decision Making
On an individual level, if you are planning a cruise, investigate the cruise line to be sure their ships do not have a record of pollution (see Cruise Ship Report Card). If you are on a cruise ship and observe any dumping of plastic or hazardous materials to sea, you should report it to the National Response Center at 1-800-424-8802.

Every year Friends of the Earth releases a Cruise Ship Report Card that gives an A through F grade to 15 cruise lines. The cruise lines are graded on sewage treatment, air pollution reduction, water quality compliance, and overall environmental footprint. Here is their recent report card and an article from Discovery News about that.

Getting a Grip on Cruise Ship Pollution (Friends of the Earth)