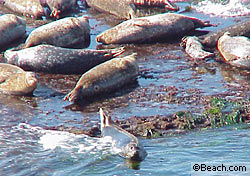 A naturally-occurring neurotoxin called domoic acid has been responsible for the deaths of hundreds of sea lions in southern California during the last several years. Domoic acid is a chemical that is produced by algae or plankton when it blooms. Domoic acid was not discovered until the late 1980s, and scientists still don't understand why or when the algae blooms occur, nor can they predict which blooms will produce toxins and when they will impact wildlife. What is known is that anchovies, sardines, clams, mussels and other sea life ingest the algae. Then when sea lions (and to a lesser extent, dolphins) eat the anchovies and other affected sea life, they become sick.

The toxin affects the part of the brain known as the hippocampus and causes rapid deterioration. Affected sea lions exhibit head weaving, bobbing, bulging from the eyes, mucus from the mouth, disorientation and sometimes seizures. The sick sea lions are almost always female, and are often pregnant. Unfortunately, not much can be done for the affected sea lions. Treatment typically consists of injecting approximately 4 liters of an electrolyte solution containing vitamin B-12 to flush out the toxin. The mammals are also given medication to control seizures. The survival rate is only about 25% to 50%.

Sea lion pups can also strand on the coast for other reasons. In 2015 a very large number of sea lion strandings were reported along the California coast. These sea lions were typically very emaciated and dehydrated, indicating a lack of food and/or a premature separation from their mothers. There is speculation that the warmer-than-normal ocean temperatures during the 2014-2015 winter caused schools of anchovies and sardines to migrate further offshore, making it more difficult for the sea lions to find food. More on this in a Thank You Ocean video.

If you see a sea lion in distress, it's important that you don't go near, touch or feed the animal. You should contact a lifeguard or a marine mammal care center. Here are the facilities in California:

There are numerous additional Marine Mammal Stranding Network Participants along the ocean coasts of the United States.


Other Health Threats to Marine Life

Unfortunately, domoic acid is not the only health threat out there and sea lions are not the only marine species affected. Sea otters, dolphins and other marine life are also being affected by pollutants and infectious agents that run off the land into the ocean. Here's a National Geographic article that discusses this issue and specific health threats.