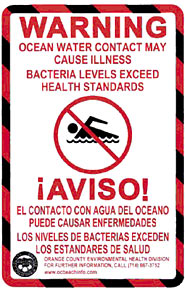 Many people know that beaches can be closed or posted with swimming advisory signs due to harmful levels of bacteria in the water. But did you ever wonder how those levels were determined, what types of bacteria are tested for and what exactly "harmful" means? Well, it all starts with health studies called epidemiology studies, or "Epi" studies for short. Epi studies are usually conducted at a popular beach with known or suspected pollution sources (e.g., storm drain, sewage outfall or river/creek). During the test period, which may range from a few weeks to three months, water samples are collected several times per day at different beach locations and analyzed for "indicator bacteria" such as enterococcus and E. coli.

The actual disease-causing agents (pathogens) are typically not analyzed because of the potentially large number of pathogens, the difficulty and expense of analysis, and the very low concentration of some pathogens, such as viruses, that can cause disease. An ideal "indicator bacteria" is one that is nearly always present when pathogens are present, survives in the environment as well as the pathogens, and is easy and inexpensive to detect.

Simultaneous with the testing, beach visitors are recruited to participate in the study. If they agree and pass some basic screening criteria, they are interviewed at the end of their beach day to establish basic demographic information as well as to determine if they went swimming. The study participants who did go into the water are questioned further to better characterize their exposure to beach water. The participants are contacted again several days later to determine if they experienced any ill effects that they attribute to their beach visit. The type of illness, severity and duration are noted. Medical verification of these complaints may be done by physicians.

The water testing results and the health survey information are then evaluated to determine: 1) what type of illnesses were reported (rashes, infections, fevers, gastrointestinal problems, etc.), 2) if there is a statistically significant difference in illness rates between those who went in the water and those who did not, and 3) if there is a correlation between the concentration of an indicator bacteria or some other measured pollutant and the number of participants who contracted a particular illness.

The end result is a series of graphs (see below) or statistical correlations between, for example, the concentration of enterococcus bacteria in the water and the number of swimmers/surfers who came down with gastroenteritis (stomach ache, diarrhea, vomiting). If a relationship can be established, then it is possible to predict the enterococcus concentration that correlates with an increase of illnesses due to swimming or other contact with beach water.

As detailed in EPA's Ambient Water Quality Criteria for Bacteria – 1986 (pdf), the current U.S. beach water quality standard is 104 colony forming units of enterococcus bacteria per 100 milliliters of water in a single water sample. Past Epi studies predict that at this bacteria concentration, approximately 19 cases of gastroenteritis will occur for every 1000 swimmers exposed to the water. The EPA has determined that any waters that test lower than the water quality standard are ‘safe' for swimming, and any that exceed it present an ‘unacceptable' health risk. Swimming advisories must be posted at beaches that fail to meet the standard. In some locations, beaches are closed when the health standard is exceeded. Related information from EPA can be found here.

The following graph is from a seminal EPA report Health Effects Criteria for Marine Recreational Waters, Part 1 and Part 2, by Victor J. Cabelli in 1983. That report led directly to the 1986 Ambient Water Quality Criteria document referenced above.

Astute readers may note that on the above graph, 19 cases of gastrointestinal symptoms per 1000 persons corresponds to an enterococcus density of about 35 per 100 milliliters, not 104. As shown in Table 4 of EPA's 1986 Ambient Water Quality Criteria for Bacteria, the value of 35 per 100 ml is the "steady state geometric mean indicator density", while the value of 104 per 100 ml is the "single sample maximum allowable density" for a "designated beach area." If at least 5 equally-spaced samples are collected from a beach in a 30-day period, a 30-day geometric mean is calculated. Swimming advisories are then issued if either the geometric mean standard or the single sample standard are exceeded. To make matters even more complicated, EPA's guidance allows states to use different single sample criteria (higher single sample standards) for beaches that are designated as "moderate full body contact recreation," "lightly used full body contact recreation," or "infrequently used full body contact recreation." For example, Oregon uses the "moderate full body contact" standard of 158 enterococcus per 100 ml, Maryland uses this same standard for "tier 3" beaches, and Connecticut uses a standard of 500 per 100 ml for "all other recreational uses" (besides "designated swimming" locations).

A document which briefly summarizes the results of Cabelli's and several other epidemiology studies is part of the guidance developed by California in setting their beach standards.

More recently, additional Epi studies have been performed, including one in Mission Bay, San Diego, CA. That study failed to establish a link between enterococcus and illness at a location where extensive efforts had been undertaken to eliminate sewage sources and many storm drain discharges had been diverted away from the area.

In the summer of 2007 a project that involved a series of Epi studies was initiated. Epi studies were conducted at Doheny Beach in Dana Point, California and at Avalon Beach on Catalina Island in southern California by a team of researchers from the Southern California Coastal Water Research Project (SCCWRP) and U.C. Berkeley. The investigation team continued their work at Doheny Beach and at Surfrider Beach in Malibu during the summers of 2008 and 2009. The final report from these studies was expected sometime in 2012. Meanwhile, here is a summary of the results from the study at Doheny.

The Beaches Environmental Assessment and Coastal Health (BEACH) Act of 2000 required EPA to develop new water quality criteria. In order to assist with this effort, water quality and public health experts from around the country convened in Virginia in March 2007 to come to a consensus on how to develop new water quality criteria. This effort required conducting several new epidemiology studies covering both freshwater and marine beaches, various climates, and different types of pollution sources (sewage, urban runoff, agricultural). Subsequent expert workshops were held in 2009 and 2011.

The process of developing new water quality criteria was ultimately dictated by a Settlement Agreement and a Consent Decree.

Prior to the conclusion of the lawsuit, EPA prepared a Critical Path Science Plan and a Criteria Development Plan. The Critical Path Science Plan describes the high priority research and science that EPA conducted to establish the scientific foundation for the development of new or revised recreational water quality criteria. The companion document, the Criteria Development Plan, describes the process and timeline EPA followed to develop and publish new or revised water quality criteria for pathogens and pathogen indicators. EPA made both documents available in August 2007.

One of the most recent developments in the epidemiology world was the release of a Surfer Health Study conducted at two beaches in San Diego, California during the winters of 2013-2014 and 2014-2015. This study was one of the first comprehensive Epi studies to focus specifically on surfers and also to focus on wet weather exposure. This article was written by Surfrider Foundation to summarize the main findings of the study.