Much of the following information was taken from the website "Harmful Algae: Red Tide" from Woods Hole Oceanographic Institution. This website has numerous useful links to scientific information, human health impacts, and impacts to animals from harmful algal blooms.


What are Harmful Algal Blooms (HABs)?

Harmful algae are microscopic, single-celled plant-like organisms that live in the sea. Most species of algae or phytoplankton (plant plankton) are not harmful and serve as the energy producers at the base of the food web, without which higher life on this planet would not exist. Phytoplankton are believed to generate as much as 80% of the world's oxygen supply. They absorb nutrients and carbon dioxide from the water and produce oxygen through photosynthesis. The two most common types of harmful algal blooms are red tides, which are marine phytoplankton and cyanobacteria, also known as blue green algae, which mainly occur in freshwater but can migrate to marine environments.

Occasionally, the bacteria or phytoplankton grow very fast or "bloom" and accumulate into dense, visible patches near the surface of the water. These blooms can threaten drinking water sources in freshwater environments, cause fish kills, and create anoxic, low-oxygen marine environments. In saltwater, "Red tide" is a common name for such a phenomenon where certain phytoplankton species contain reddish pigments and "bloom" such that the water appears to be colored red. The term "red tide" is thus a misnomer because they are not associated with tides. During these blooms, most of the phytoplankton eventually die and sink to the bottom, where they are decomposed by bacteria. These processes deplete the dissolved oxygen necessary for the survival of fish and other organisms.

Unfortunately, a small number of species also produce potent neurotoxins that can be transferred through the food web, where they affect and even kill the higher forms of life such as zooplankton, shellfish, fish, birds, marine mammals, and even humans that feed either directly or indirectly on them. Certain species can even release a neurotoxin that becomes airborne, causing direct impacts to nearby humans and animals. Scientists now prefer the term, HAB, to refer to bloom phenomenon that contain toxins or that cause negative impacts. To learn more about red tides (lower left image) visit this article, and to learn more about cyanobacteria (lower right image) visit this article. 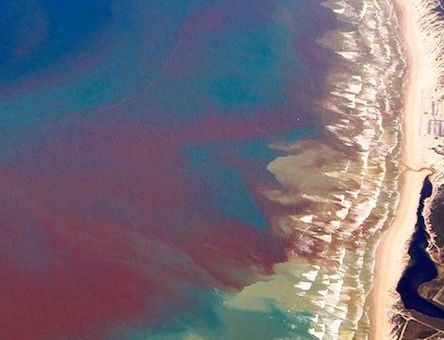 The human health threats and illnesses associated with harmful algal blooms are highly dependent on the location of the bloom, because that generally dictates what species of phytoplankton or algae is present. For red tides, people are exposed principally to the toxins produced by harmful phytoplankton through the consumption of contaminated seafood products. For instance, dinoflagellate algal blooms create "red tides" which can release strong neurotoxins, such as saxitoxin, that can be ingested by shellfish and passed on to humans who eat the infected shellfish. See the Red Tides article for details on various health threats by region.

Some phytoplankton, such as Karenia brevis found in the Gulf of Mexico are severely harmful to humans and wildlife directly, either through water or air exposure. Karenia brevis produces brevetoxins that can be come airborne with the sea spray and cause fish kills, respiratory irritation and possibly other health effects in humans and other mammals occur. More on this.

Regarding the potential for bioluminescence, the following information was adapted from correspondence from Peter Franks at Scripps Institute of Oceanography in La Jolla, California:

A periodic occurrence along the California coast is the appearance of water that has a red, brown or purple hue, commonly referred to as "red tide". This is caused by dense accumulations near the surface of dinoflagellates (think: tiny cellulose-covered balls with two little whips for propulsion). Many dinoflagellates are photosynthetic (make sugars from light and carbon dioxide), and bioluminescent (make their own light). Each cell is about 30-40 microns across (there are 1000 microns in a millimeter, which is about the thickness of a dime). The cells have tiny sacs of enzymes that react when the cell is jostled (for example by the breaking surf). When the enzymes react, they give off a bluish flash of light. So our waves (and your footsteps on the beach; your hands and feet when you swim) will be adorned with gorgeous flashes of light at night.

The bioluminescence of these cells is on a circadian rhythm - they don't bother making light during the day because no one could see it. Try this to amaze your friends and children - get a clear jar or bottle, and fill it with some water from the surf zone (ask a friendly neighborhood surfer to fill it for you in deeper water, to get less sand in it). Take your bottle home, and wait until after the sun has gone down. Then take your bottle into a dark room (bathroom or closet with no windows). Wait for your eyes to adjust to the darkness (a minute or so), and then give your bottle a swirl. You should see a really amazing light show. For extra added excitement, add some vinegar to the bottle. You'll get a particularly bright flash (but then all the cells will die, so it only works once). The acid of the vinegar makes the enzymes react inside the cell, even without stirring.

As noted above, HABs include different types of algal taxa such as dinoflagellates, diatoms, and cyanobacteria (although we should note that cyanobacteria isn't actually an algae). Cyanobacteria, also known as blue-green algae, are of special concern because of their potential impacts on drinking and recreational waters. Found mainly in freshwater, cyanobacteria can produce unsightly conditions along the shoreline and in open waters degrading aquatic habitats and posing a health risk to humans, pets or wildlife. Increasingly, water managers and the public have expressed concerns about public health and environmental quality from HABs toxins in recreational and drinking waters have become an increasingly serious public health and environmental concern in the United States. EPA has compiled information on freshwater HABs and their effects to help inform the public about potential impacts of toxic algal blooms in freshwater. 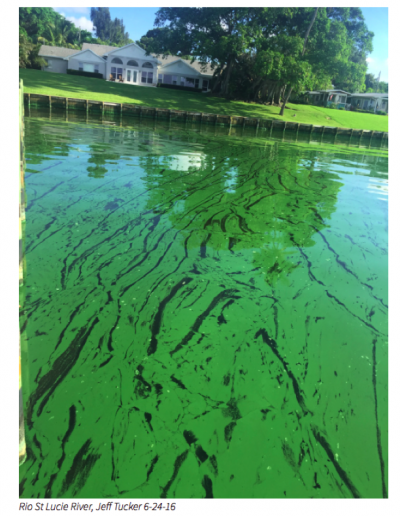 Florida frequently experiences massive blue-green algae bloom directly related to managed discharges of contaminated freshwater from Lake Okeechobee into the St. Lucie River. In 2016 and 2018 Governor Rick Scott declared a State of Emergency in St. Lucie and Martin Counties on the Atlantic Coast of Florida in response to the blooms that were covering the St. Lucie River and contaminating area canals, estuaries and even ocean beaches. Although blue-green algae is a freshwater species of algae, this bloom was so massive that it impacted marine waters near the mouth of the St. Lucie River and survived for some time in ocean waters. Oh, and water tests from some of the affected areas indicated that the water was toxic. Here's some background on this problem and a list of solutions.

In 2018, Florida was plagued yet again by a red tide on the Gulf side, and a massive blue-green algae bloom on the Atlantic side. These HAB's are killing manatees, sea turtles, and fish; and the toxins are becoming airborne, poisoning the air in coastal towns. Learn more about the 2018 event here.

The western part of Lake Erie sometimes experiences blooms of Microcystis, a type of cyanobacteria. When close to shore, these blooms foul the beaches, producing a rotten smell. More important, some forms of Microcystis produce liver toxins; although these usually cause nothing more than skin and intestinal problems in humans, they have in some cases caused death in pets, wildlife, and livestock. These blooms can also contribute to the Lake Erie dead zone, an area of depleted oxygen that threatens the lake's billion-dollar fishery.

The Lake Erie algae blooms that developed in 2011 and 2012 have sparked an increased monitoring effort that hopefully will lead to solutions. More problems were experienced in 2013 and now NOAA's National Centers for Coastal Ocean Science (NCCOS) issues weekly and seasonal forecasts. Also see here.


Relevant Websites and Other Sources of Information

What are Algae Blooms and Why Are they Bad? (Popular Science)