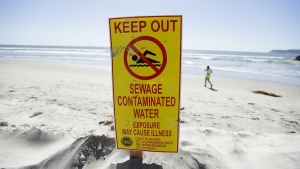 Recreational use of ponds, rivers, lakes, and the ocean remains immensely popular in the U.S. and includes activities such as swimming, surfing, snorkeling, paddling, and diving. According to the National Survey on Recreation and Environment (NSRE), more than 143 million people in the U.S. (61% of the population over the age 16) use surface waters to engage in non-motorized water sports. While some pollutants in the water are easily identifiable and avoidable, such as plastic and garbage, unseen microbial threats continue to pose serious risk to recreational water users health.

Swimming in polluted water exposes recreational users to these disease causing microorganisms, called pathogens, which are associated with a range of enteric and non-enteric illnesses. Enteric simply means residing in the human intestines, and the most common recreational water illness (RWI) is acute gastrointestinal illness (AGI). AGI Symptoms include: nausea, vomiting, diarrhea, stomachache, and fever. Many different types of pathogens in polluted water (such as bacteria, viruses, and protozoa) can cause AGI and other serious infectious diseases.

In addition to AGI, bacterial exposure can cause salmonellosis and cholera, viruses can cause respiratory infections and hepatitis, and protozoans can cause dysentery, cryptosporidiosis, and giardiasis. Although rare, deadly infectious agents such as MRSA, V. Vulnificus (“flesh-eating bacteria”), and Leptospira can be contracted from swimming in polluted recreational waters.

Non-enteric illnesses include ear, eyes, nose, and throat infections. Fortunately, most RWI cases are mild and non-serious. AGI typically requires little-to-no treatment and generally does not have long-term health effects. However, vulnerable populations such as children, the elderly, and those with weak immune symptoms are more likely to develop severe illness when infected. Those who frequent the water more often, like avid swimmers and surfers, also face an increased risk of infection. Although RWIs are generally mild, they are uncomfortable and widespread.

Researchers estimate that 90 million RWIs occur annually and cost the U.S. economy $2.2-$3.7 billion each year. Furthermore, a recent meta-analysis of 19 research studies was conducted on the risk of RWI infections for bathers vs non-bathers (“bathing” was defined as any recreational activity taking place in or on natural bodies of untreated water, such as the sea and lakes). The results were statistically significant and provide the strongest evidence to date of this association. The study found that bathers had a 86% higher risk of developing any symptoms of illness, a 105% increased risk for ear ailments, and a 29% risk increase for AGI compared to non-bathers. In addition, an epidemiological study in Santa Monica Bay found that there is an increased health risk when swimming within 400 yards of a flowing storm drain. In Southern California you will be hard pressed to find a stretch of surf that isn't near a storm drain.

In the field of exposure science there are four main ways in which pathogens enter the human body, referred to as ‘routes of exposure’. The main routes are ingestion, inhalation, and dermal contact. For recreational water user’s, ingestion is the most common route of exposure (which is why it is recommended you avoid swallowing the water). When you ingest contaminated water, you expose yourself to AGI causing pathogens such as V. cholera, salmonella, E. coli, norovirus, and rotavirus among many others.

Although less frequent (but often more severe), pathogen exposure through inhalation and dermal contact does occur in recreational waters. The deadly bacteria species, legionella, thrives in the mist of warm freshwaters and enters the lungs when tiny legionella-containing water droplets are inhaled. It is most often found in public spas, hot springs, rivers, and lakes, but outbreaks have occurred at beach shower facilities.

Staphylococcus Aureus (S. aureus) is a common strain of bacteria that resides on the skin (approximately 30% of the U.S. population is colonized with it). Colonization of the skin itself is not harmful and staph infections generally result in minor skin conditions; however, if S. aureus makes its way deeper in the body and enters the bloodstream through a wound, deadly infections can occur. This is especially true with the emergence of methicillin-resistant staphylococcus aureus (MRSA).

Normally staph infections are treated with routine antibiotics (methicillin), but recently, strains of staph have become resistant to these antibiotics which makes the infection increasingly hard to treat. MRSA infections used to occur most frequently in healthcare facilities, but now it is increasingly spreading into the community and environment. Not only have MRSA and S. Aureus been isolated from the sand and water at saltwater beaches, but a 2017 study in Ohio found isolates in the sand and water of freshwater beaches as well. The researches found S. aureus in 22% of their samples overall, 14.6% of which was susceptible to methicillin and 8% which was methicillin-resistant (MRSA). In turn, iterating the importance of covering up wounds before heading to the beach.

Exposure to sewage-polluted water is the most common source of illness in recreational water users, even swallowing a small amount may induce sickness. Sewage often contains the disease-causing pathogens previously mentioned (bacteria, viruses, and protozoa). Sewage makes its way to our oceans most commonly through sewage overflows, polluted stormwater runoff, malfunctions in treatment plants, boating waste, and septic systems malfunctions. Pollution levels after a storm are particularly concerning. During and after heavy rainfall, rainwater flowing towards the beach and down stormwater drains, picks up pollutants such as animal waste, fertilizer, pesticides, and trash which can end up in our oceans. This is why it is recommended you always avoid the waters for 72 hours after a rain event, especially near a stormwater drain. Seventy-two hours is used as a general rule of thumb because natural processes help return bacteria levels to normal during this time period. In particular, ocean currents play an important role by diluting and dispersing stormwater runoff, which is why elevated bacteria levels can remain persistent at enclosed beaches with little circulation.

Unfortunately, not all health departments issue rain advisories or post signs; in addition, most agencies only test the waters for enterococcus (in salt water) and E. coli (in freshwater). This leaves levels of other toxins and pollutants unchecked, such as viruses, hydrocarbons, pesticides, herbicides, fertilizers, and heavy metals. Surfrider believes increased outreach and education is needed to warn recreational water users about these risks and improvements to infrastructure are urgently needed in coastal areas.

The best way to stay healthy during your next trip to the beach is to be aware of any issued advisories or closures. In general, beach health officials will issue an advisory or close a beach when water quality samples exceed the allowable levels of enterococcus or E. coli (these are “fecal indicator bacteria” as they indicate the presence of sewage and potentially other, more harmful pathogens). Management decisions to issue an advisory or closure based upon sample results vary widely between states; however, most monitoring programs will post a sign at the beach and update their website when an advisory or closure has been issued. It is recommended that you avoid contact with the water when an advisory has been issued.

Other important water quality safety tips include: avoid swimming after heavy rainfall, at sites with known sewer and stormwater discharges, at estuaries downstream of urban development, at areas adjacent to industrial pipe discharges, avoid swallowing the water, and avoid swimming with an open wound (particularly if you want to avoid the flesh eating bacteria V. Vulnificus and MRSA infections).

Beach water quality monitoring programs are conducted by state, tribal, county and local health officials, typically through the environmental health department. If you’re lucky, information about the monitoring of your favorite beach is readily available through a web search or on your county’s environmental health website. Unfortunately, regional and local health agencies are often limited by funding, so not all beaches are tested and many aren’t tested with high frequency. To help alleviate this gap in coverage, many nonprofits, including Surfrider, conduct volunteer beach water quality monitoring in many coastal towns, with results posted on the Blue Water Task Force webpage. For more information on your state’s water monitoring program and voluntary beach testing programs, check out Beachapedia’s State of the Beach Water Quality section.

If you feel you have gotten sick after exposure to polluted ocean water, you can report it at Surfrider's Ocean Illness Reporting Tool.

Transworld Surf published an article Seven Surf Sicknesses. These are actually a mixture of illnesses and the pathogens that cause illnesses. Their list is: MRSA, Hepatitis A, Encephalitis and Meningitis, Gastroentiritis, Vibrio Vulnificus, Leptospirosis, and Unknown and Bizarre illnesses.

Some surf-specific accounts of extreme health effects from exposure to polluted runoff and/or sewage spills include:

Marine Life is Affected Too!

Sea Otters, Dolphins and other marine life are also affected by pollutants that are discharged into the ocean. In fact, because they spend all their life in the ocean and subsist entirely on food from the ocean, they are more vulnerable to pollutants and infectious agents than humans. This National Geographic article explores some of the issues and specific pollutant threats.

Environmental Protection Agency (n.d.). Before you fo to the beach. Retrieved from https://www.cdc.gov/healthywater/swimming/materials/brochures.html

Leonard AFC, Singer A, Ukoumunne OC, Gaze WH, Garside R. (2018). Is it safe to go back into the water? A systematic review and meta-analysis of the risk of acquiring infections from recreational exposure to seawater. International Journal of Epidemiology. 47(2):572-586. doi:10.1093/ije/dyx281.

Thompson, H. (2014). Eight diseases to watch out for at the beach. Retrieved from: https://www.smithsonianmag.com/science-nature/diseases-watch-out-beach-180952346/