Ocean currents are the vertical or horizontal movement of both surface and deep water throughout the world’s oceans. Currents normally move in a specific direction and aid significantly in the circulation of the Earth’s moisture, the resultant weather, and water pollution.

Oceanic currents are found all over the globe and vary in size, importance, and strength. Some of the more prominent currents include the California and Humboldt Currents in the Pacific, the Gulf Stream and Labrador Current in the Atlantic, and the Indian Monsoon Current in the Indian Ocean.

Ocean currents are driven by several factors. One is the rise and fall of the tides, which is driven by the gravitational attraction of the sun and moon on Earth's oceans. Tides create a current in the oceans, near the shore, and in bays and estuaries along the coast. These are called "tidal currents." Tidal currents are the only type of currents that change in a very regular pattern and can be predicted for future dates.

Surface ocean currents carry heat from place to place in the Earth system. This affects regional climates. The Sun warms water at the equator more than it does at the high latitude polar regions. The heat travels in surface currents to higher latitudes. A current that brings warmth into a high latitude region will make that region’s climate less chilly. Ocean currents can flow for great distances, and together they create the great flow of the global conveyor belt which plays a dominant part in determining the climate of many of the Earth’s regions. Perhaps the most striking example is the Gulf Stream, which makes northwest Europe much more temperate than any other region at the same latitude. Another example is the Hawaiian Islands, where the climate is cooler (sub-tropical) than the tropical latitudes in which they are located, due to the effect of the California Current.

The video below is a visualization showing ocean surface currents around the world during the period from June 2005 through December 2007, created by NASA/Goddard Space Flight Center Scientific Visualization Studio 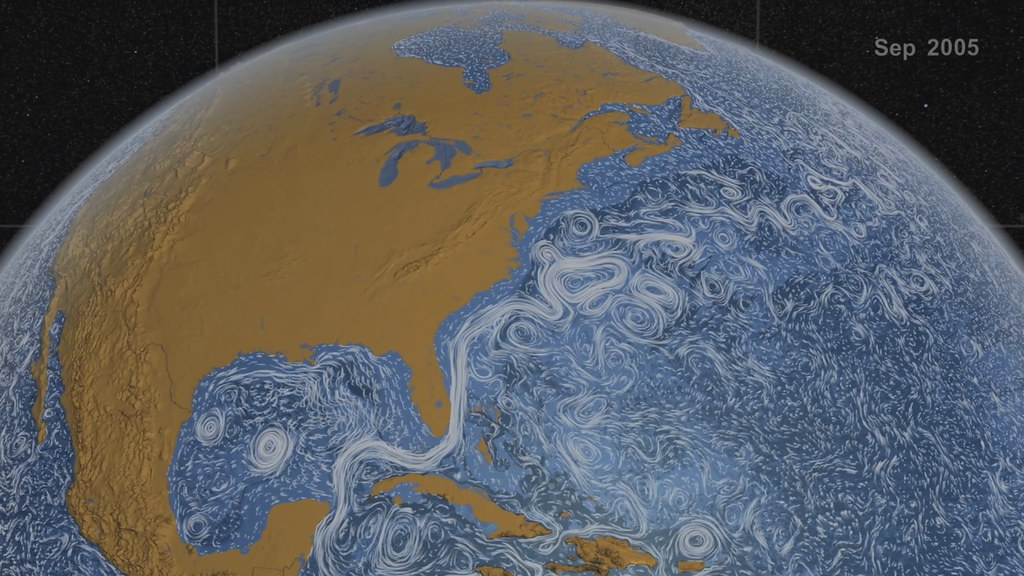 References and Additional Sources of Information