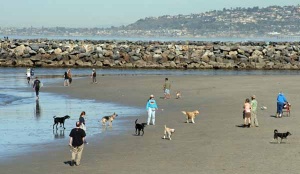 When owners neglect to pick up after their animals, pet waste gets left behind and can wash into storm drains. The waste then becomes a pollutant in the runoff that drains into local waterways; lakes, rivers, estuaries, bays or the ocean. On land, as well as in the water, the waste left by our pets can spread harmful diseases through numerous types of bacteria and parasites.

The average size dog dropping contains about 3 billion fecal coliform bacteria, and up to 95 percent of the waste found in urban storm drains comes from animals. There are an estimated 78 million owned dogs in the United States that produce about 29,000 tons of waste a day.

Pet waste can contain bacteria and parasites, causing infections such as the following:

EPA has published information on pet waste management, including a summary article and a collection of brochures, posters and public service announcements (search for pet waste) on the subject.

In Massachusetts, the Department of Public Health has published information on Pet Waste and Bathing Beaches.

A newspaper article in Maryland cited more than 50 studies by the Maryland Department of the Environment and Salisbury University tracking waterborne bacteria back to its sources in concluding that up to a third of bacterial pollution in urban areas and an even higher percentage in certain watersheds has been traced back to pets.

An article in the Great Lakes Echo discusses the effects that dog waste can have on beach water quality in Michigan.

In Santa Barbara County, California, Santa Barbara Audubon Society and Friends of Douglas Family Preserve have produced a brochure Eco-Dog's Beach Guide that lists off-leash, on-leash and no pets beaches in Santa Barbara County and also has a list of "Pawsitive Beach Tips" and best management practices for dog owners. A study of pollution sources in the Arroyo Burro watershed in Santa Barbara revealed that among the fecal sources into the lagoon, including upstream human sources and coastal birds, canines were the most important. Canine sources included input via upstream creek water, which decreased after creek-side residences were educated about proper pet waste disposal, and direct inputs to the lagoon and surf zone, where dog waste could have been tidally exchanged with the lagoon.