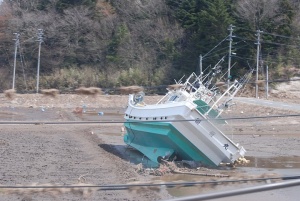 A boat carried inland and abandoned in a field north-east of Japan after the 9.0 earthquake and tsunami, April 12 2011. Photo Credit: VOA - S. L. Herman

All matter is composed of atoms. Atoms can be stable or unstable. Radiation is energy emitted from unstable atoms in the form of electromagnetic waves or photons, or in the form of subatomic particles to become more stable. The nuclei of unstable atoms disintegrate or decay as they give off excess energy in the form of radiation. By definition, radiation includes mundane things like light, heat, radar, and radio- or microwaves which pose no significant risks to human health. So in the context of considering radiation exposure and its effects on human health, radiation refers to "ionizing" radiation.


What Is Ionizing Radiation?

There are two types of radiation: ionizing or non-ionizing. Non-ionizing radiation (such as light, heat, radar, and radio- or microwaves) excites matter which it passes through but does not break molecular bonds or displace (or remove) electrons from atoms. On the other hand, ionizing radiation (such as x-rays and cosmic rays) can pass through matter, break molecular bonds and displace (or remove) electrons from atoms to become electrically charged or ionized. In living cells of plants, animals, and people, the electrical ions produced by ionizing radiation can affect normal functioning of the cells directly or indirectly.


Why Is Ionizing Radiation Harmful to Us?

Cells may be impaired or damaged by ionizing radiation directly or indirectly depending on the types of atoms affected in the cells. A direct effect of ionization breaks the atoms of DNA molecules, or some other critical components of cells to replicate properly or regulate cell function. The cells die or mutate because of the direct damage to the DNA molecules or to other critical components. An indirect effect of ionization impairs or damages cells by causing structural changes within the cells. Water molecules in cells can be decomposed into hydrogen (H) and hydroxyl (OH) ions by ionization. These fragments or "free radicals" may recombine as water or form compounds such as hydrogen peroxide (H2O2). Water would not harm a cell; however hydrogen peroxide is toxic and could lead to the destruction of a cell. The indirect effect is more likely to occur than the direct effect since a DNA molecule is a very small part of human cells whereas water takes up 65-90% of human cells.


Why Don't We Get Sick from X-rays or Airport Scanners?

Well, radiation is naturally occurring energy in the environment. We receive ionizing radiation both from natural background and man-made sources. Radiation effects can be reversible since cells can repair damage and function normally. Therefore, harmful health effects might not be observed unless we are exposed to large doses of ionizing radiation. Also, there are several factors to determine our bodies' overall sensitivities to ionizing radiation.

A person exposed to an excessive dose of ionizing radiation may suffer symptoms such as nausea, fatigue, vomiting, and diarrhea. Other symptoms such as skin burns, hair loss (epilation), hemorrhage, inflammation of the mouth and throat, sterility, and cataracts may also be present. In severe cases, death may occur since massive cell damage can lead to organ failures and hematopoietic, gastrointestinal, and central nervous systems ceasing to function.

Unlike high doses, low doses of ionizing radiation do not cause immediate health problems since the affected cells do not die but only mutate. Mutated cells may lack some critical component to reproduce or function normally. Or they may still be able to reproduce, perpetuating the mutation on daughter cells, thus starting a process that might lead to a cancer over a period of time. This effect of low doses of ionizing radiation is called the carcinogenic effect. The carcinogenic effect of ionizing radiation exposure is well documented. Many studies have found an association between the induction of cancer and exposure to ionizing radiation. For example, lung cancer in uranium miners, thyroid cancer in therapy patients, skin cancer in radiologists, and leukemia in bomb survivors are positively correlated with higher levels of radiation doses.


So, Do People Get Cancer From X-rays and Airport Scanners?

The answer is, "We don't know." The model used in radiation exposure risk assessment is called "linear no-threshold risk model." It is based on the assumption that with any dose of radiation, there is some additional risk of cancer. The model is linear because an increase in dose results in a proportional increase in risk. The model has no threshold because any dose, no matter how small, produces some risk. The risk does not start at 0 because there is some risk of cancer from background exposure and other risk factors. This model is the most conservative and perhaps somewhat too simplistic.

The link between low doses of radiation and cancer is yet to be established by epidemiology. Some of us who submit to medical X-rays or travel on commercial air flights will die of cancer some day. But it is very difficult to prove that the cancer is caused by very small or negligible doses of radiation from X-rays or airport scanners. The studies linking radiation exposure and cancer are based on populations exposed to relatively high radiation doses as in uranium miners subjected to occupational exposure or therapy patients subjected to therapeutic medical exposures. These studies provide a radiobiological model but it might not be realistically applied to low doses cases. Also there are many carcinogenic agents in the environment such as tobacco smoke, ultraviolet light, asbestos, some chemical dyes, fungal toxins in food, viruses, and others. In most cases, discerning the effects of low doses of radiation from the effects of these other carcinogenic agents is not possible.

We can all agree that it is a good idea to keep radiation exposure as low as reasonably achievable. However, there is still considerable uncertainty about the overall effects of low doses of radiation exposure.


Is Radiation Harmful To Marine Life?

The accident at the Fukushima Daiichi Nuclear Power Station (NPS) after an earthquake and tsunami on March 11, 2011 in Japan released radioactive materials to the environment. This section gives some update information on the accident and considers some of the environmental impacts which resulted from the accident.

One year after the earthquake and tsunami on March 11, 2011, the reactors at the Fukushima Daiichi NPS are shut down and the health and safety risks of the radiation exposure to land areas outside 80 kilometers (50 miles) of the Fukushima Daiichi NPS are low and not significant. According to the "Fukushima Nuclear Accident Update Log" issued on June 2, 2011, on most of the offshore monitoring stations radioactive Iodine-131, Cesium-134 and Cesium-137 reached levels below the applied detection limit of 10 Bq/L. From this point, the radioactive pollution level of the seawater has been considered to be negligible. However, the pollution level was much higher in surface sediments at the near shore stations close to the damaged reactors. The level for Cesium-137 was between 24 and 320 Bq/kg in the middle of May 2011.

Radiation certainly can harm marine life. Not all living cells are equally sensitive to radiation. Actively reproducing cells are more sensitive since dividing cells require correct DNA information to pass on to the daughter cells so that the daughter cells can survive and reproduce. For this reason developing eggs and larvae of marine organisms are highly sensitive to radiation. Deformed organisms may not survive, but some of them are able to reproduce and pass abnormalities on to the next generation. Therefore, it is possible that the low doses of radiation would cause mortality or reductions in reproductive potential of marine organisms that become exposed. Unfortunately, it is very difficult to establish the link between low doses of radiation and negative impacts on marine life such as potential reduction in fish populations. In addition, the massive tsunami caused extensive damage to the natural habitats of many marine species including coastal birds and fish along the north-eastern coast of Japan. The effects of radiation might be overshadowed by direct/indirect changes to the marine environment caused by the tsunami.

These are some of the direct/indirect changes to the marine environment caused by the tsunami:

The basic information on radiation was taken from the following articles and websites:

Much of the information on the biological effects of radiation was taken from the following articles and websites:

The information on radiation risk to marine life was taken from the following articles:

Read more about the current status of the Fukushima Daiichi NPS:

"One Year after Fukushima" By Sharon Squassoni, Andrew Noble (Center for Strategic and International Studies, 3/7/2012),