One of the consequences of offshore oil drilling is the construction of an oil drilling platform. These structures can be quite sizable, and in most cases they are anchored to the ocean floor. The total height of the platform, including the underwater portion, can be over 1,000 feet. There are 27 oil drilling platforms off the coast of southern California and thousands in the Gulf of Mexico.

A typical condition of the leases granted to oil companies to drill offshore is that the oil platform be removed upon termination of the lease or when production ceases. The mandate to remove the platforms is primarily based upon a common-sense desire to return the area to pre-development conditions, clean the ocean bottom of pollution related to the oil drilling and production operations, and remove a structure that could be a hazard to navigation, commercial fishing, or diving. 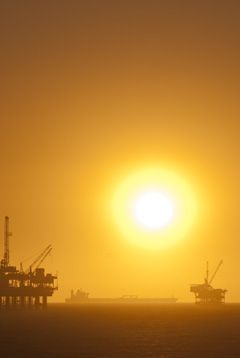 Now that many offshore drilling platforms are nearing the end of their useful life, oil companies have championed legislation at both the state and national level to allow some platforms to remain in place. There is clearly an economic incentive for the oil companies to be granted such an exemption. They would stand to save millions of dollars if they could forgo the requirement to remove the platforms. But it is not just the oil companies that have advocated for this option – some recreational fishermen, diving groups and marine scientists are also joining in the call to allow an underwater portion of the platforms to remain as an artificial reef. The general program had been termed “Rigs to Reefs.”

There’s no question that a variety of marine life can often be found attached to and in the area immediately surrounding many oil platforms. Although there is some scientific disagreement on whether the marine life represents an overall increase in biomass or simply a relocation from nearby areas, these areas of relative biological abundance have attracted the attention of divers and fisherman.

In California, a study was completed by the Ocean Science Trust to evaluate the feasibility, environmental impacts/benefits and costs of partial (removal to 85 feet below the waterline) versus complete removal of the platforms. Although the study was intended to be only the second phase of a 3-phase process to inform and develop state policy on this issue, legislators jumped the gun and introduced legislation to authorize a “rigs to reef” program at about the time of release of the draft report. The legislation (A.B. 2503) was passed and signed by the Governor in fall 2010.

“Overall, the law is flawed. It puts oil platform operators in the drivers' seat, constrains the discretion of our State agencies to protect the environment, and may subject the State to uncertain future liability. These flaws will make it difficult for the State to develop a rigs-to-reefs program based on sound policy.”


At the federal level, the Minerals Management Service (now Bureau of Ocean Energy Management) adopted a national policy in 1985, authorized by the National Fishing Enhancement Act, that encourages partial removal and conversion to artificial reefs under some circumstances. Several states in the Gulf of Mexico region have passed laws authorizing drilling rigs' partial removal, a precondition to allowing partial removal under federal law. Of about 3,000 platforms in the Gulf that have been decommissioned, about 450 have become artificial reefs. New proposed legislation could make such conversions even easier, would only require that platforms be cut off at the waterline, and would effectively delay required platform removals by years as government studies are completed.

Since both federal and state legislation requires rig conversions to be evaluated on a case-by-case basis, it’s a good bet that the Rigs to Reefs issue will be a subject of debate for many years to come. In fact, the issue arose in July 2014 when about 25 individuals, mainly representing environmental groups, signed a letter sent to Interior Secretary Sally Jewell urging "strong and consistent implementation of the Department of Interior's Idle Iron policy requiring full decommissioning of spent oil and gas structures at the end of their useful economic life."

"Industry has expanded their requests for Interior Department waivers to Idle Iron protocols – instead seeking permanent seabed disposal of disused oil and gas infrastructure throughout Gulf of Mexico waters under the misnomer of Rigs-to-Reefs projects," the 7-page letter later continued. "The permanent seabed placement of obsolete oil and gas extraction infrastructure invites more ecosystem damage rather than restoring it as originally envisioned." The letter in part stated that the rigs' deteriorating metal can harm "sensitive Gulf habitats." It also states that, by attracting fish, the artificial reefs can cause overfishing of certain species and can expand habitat for invasive species.

Richard Charter, a senior fellow at The Ocean Foundation who co-authored the book Bring Back the Gulf that was released in July 2014, said during a teleconference on Wednesday that oil and gas companies have an "obligation to return a reef bed to its natural state." Charter said "thousands of rigs due for decommissioning in the coming years" as some of the oldest deep-water wells reach the end of their lives. His his co-author, DeeVon Quirolo, added that the Gulf has reached "critical threshold of such artificial structures." More on this.

California's New Rigs to Reefs Law, UCLA Institute of the Environment and Sustainability