The protection and cultivation of healthy soil is critical to the Earth’s biosphere, clean water supply, and global food availability, yet it is frequently overlooked and misunderstood. In addition to supporting plant life, providing habitat for local species, promoting biodiversity, capturing water into underground aquifers, and improving water quality in the watershed; healthy soils can actually be a powerful solution when it comes to preventing exacerbated climate change by encouraging carbon sequestration and storage.

Healthy soil is the foundation of Surfrider Foundation’s Ocean Friendly Gardens program, which takes a watershed approach to protecting clean water at the beach and in local waterways. Watch this short video to learn how building healthy soil is also a tool we can all use to help reduce the impacts of climate change in our own yards.


Atmospheric Carbon and Climate Change
The planet has experienced rapid increases in the concentration of atmospheric carbon, measured at ~315 parts per million (ppm) in 1960, it now reaches over 406 ppm (even up to 412 pending the day) in 2018. This increase in atmospheric carbon is directly correlated to the increase in global average temperature, and is the cause for this temperature anomaly and changing climate. 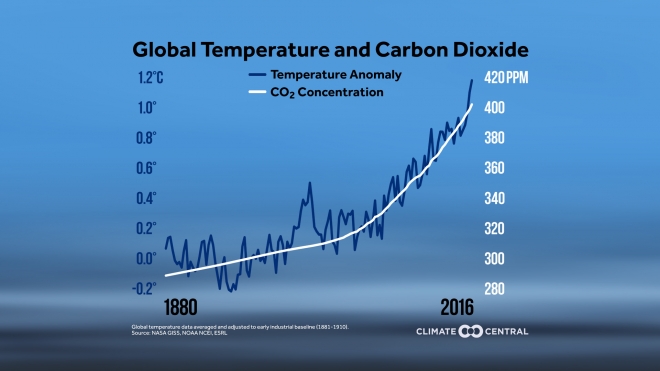 The Carbon Cycle
Carbon is a natural, vital part of the Earth’s system. About 200 billion metric tons of carbon move throughout the planet in what is known as the “carbon cycle”, with reserves in the atmosphere, plants and animals (called the biosphere), soil, ocean, and deep geologic reservoirs (like underground oil and gas reserves, also called hydrocarbons). In its natural, balanced cycle, carbon is not only benign but essential to life on earth. 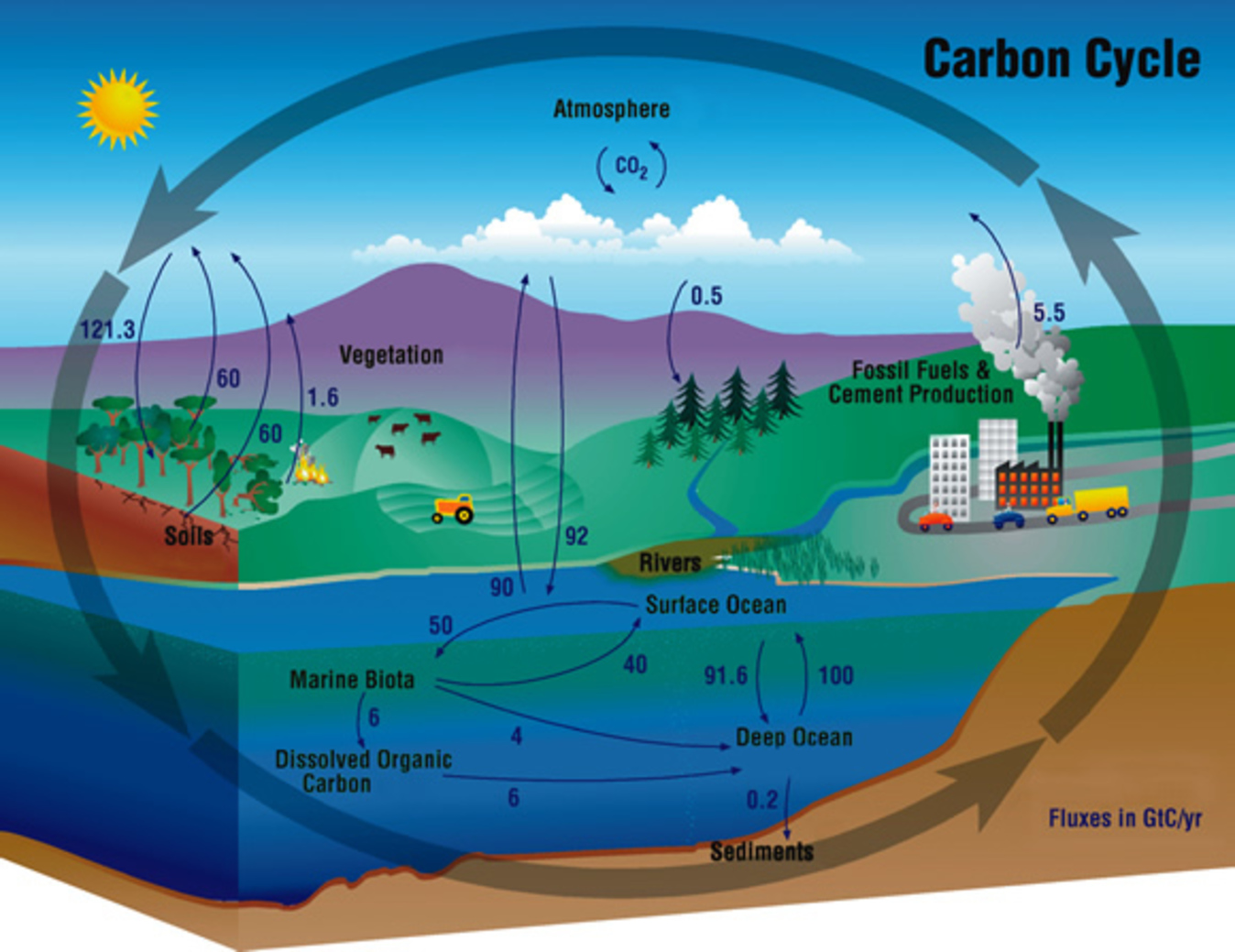 The issue is that humans have put the carbon cycle out of balance, taking roughly 10 billion metric tons of carbon out of geologic reserves by drilling and burning fossil fuels (which would otherwise be in permanent reservoirs) and releasing it back into our atmosphere. This addition of carbon into the atmosphere is surpassing the planet’s natural ability to remove carbon by photosynthesis, resulting in increased concentration of atmospheric carbon, which is amplifying the greenhouse effect and causing climate change.

Plants & Soil Carbon Sequestration
Plants provide a natural method of removing carbon from the atmosphere through photosynthesis, and then storing or “fixing” much of that carbon in their tissue, roots and soil. This process is known as carbon sequestration. Over time, when the plant dies or gets consumed by animals and returned to the soil as litter, it helps create soil organic matter (SOM), also known as compost, which is extremely nutrient rich and loaded with fixed carbon. Healthy soils mean stronger carbon reservoirs and healthier plants, which will continue to take carbon out of the atmosphere, build SOM, and promote growth of new plants, providing a feedback loop that could help bring the system back into balance.

Approximately 75% of the terrestrial carbon is actually in the soil, and in its healthy state can store up to 11 gigatons of CO2 every year. However, when we lose healthy soils by developing over natural areas, or by conducting conventional agricultural practices like clearcutting, tilling, and over-grazing; we reduce the ability to use this reserve as a natural storage of carbon. We also release the carbon that’s previously been captured back into the atmosphere. Traditional landscaping also reduces and even destroys the soil’s ability to absorb carbon in many of our residential areas, by killing necessary soil biology with chemical fertilizers and pesticides applied to maintain mono-culture turf lawns.

Learn about the carbon cycle and soil carbon from Kiss the Ground:


Granted, the process of carbon sequestration and respiration is much more complicated than it sounds, and requires additional research to truly optimize and measure the impact of this carbon reservoir. For instance, depending on the level of soil decomposition, biological colonization, and rate of plant respiration, carbon dioxide and nitrous oxide can get released from soil. These releases can be minimal (still providing a net benefit of carbon/greenhouse gas sequestration), complete (resulting in no benefit) or, hypothesized by some, massive; releasing more greenhouse gases than was originally captured due to increased decomposition by more active and energized soil microbes (acting a source). Meanwhile, some anoxic soil bacteria can actually consume nitrous oxide, acting as an important sink for this potent greenhouse gas. Even with these complexities, net sequestration of both nitrous oxide and carbon can be possible through careful management:

“The[se] findings…may undermine some assumptions of plant-soil systems as potential sinks for atmospheric CO2, but all is not lost. Through manipulations of soil nitrogen, organic matter quality, and field management, the balance of soil decomposition patterns can be tipped in a more positive direction.” – Excerpt from Kowalchuk, 2012.

Note that to prevent the severe impacts from exacerbated climate change, we can’t just rely on healthy soils to offset our impact. We need to stop adding additional carbon into the atmosphere as soon as possible, but to help alleviate the damage we’ve already done to our planet, and to sequester some of the carbon that we’ve already added to the atmosphere, we need to cultivate and protect healthy soils.