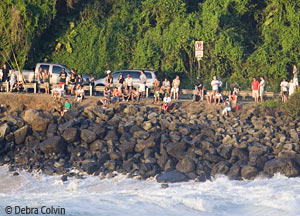 Ocean and Great Lakes beaches are some of the most popular destinations in America - for both locals and tourists. In 2014, the tourism and recreation sector of the U.S. ocean and Great Lakes economy accounted for 2.2 million employees, $51.2 billion in wages, and $107.3 billion in goods and services. More than 180 million people visit the beach for recreation every year. The narrow coastal fringe that makes up 17% of the land in the United States is home to over half our population. The population in coastal counties has increased 45 percent (adding 50.9 million people) since 1970, further indicating the powerful attraction that many of us feel to the beaches and ocean. The beach permeates our popular culture. But beaches are disappearing at an alarming rate, due to both natural processes and unwise human interventions. In too many places, we have blocked historical sources of sand by damming rivers and building shoreline structures that interrupt sand transport. Add to that the increasing amount of development along our coasts and global warming which is causing sea level rise, and it's not hard to see why our beaches are in trouble.

Since we insist on building very close to the water’s edge, beach erosion problems often prompt either expensive beach fill projects that may have unintended ecological consequences or ugly, beach-destroying seawalls that exacerbate the rate of beach erosion. This loss of sand, from the blocking of natural sediment transport mechanisms and exacerbated erosion from coastal armoring structures, often causes a reliance on expensive, overly-manicured imported sand. There may also be a corresponding loss of coastal habitat important for a wide range of species that use the land/sea interface for foraging and reproduction.

Then when you venture into the water, will you get sick as a result? Closed beaches due to sewer spills and the appearance of beach health advisory warning signs due to pollution from urban runoff continue to be much too frequent. An EPA report sent to Congress in August 2004 found that more than 772 combined sewers discharge around 850 billion gallons of untreated wastewater into nearby waterways. The agency estimates these discharges lead to about 3,500 to 5,500 gastro-intestinal illnesses every year.


What state is your beach in?

The Surfrider Foundation State of the Beach report is our continually-updated assessment of the health of our nation’s beaches. It is intended to empower concerned citizens and coastal managers by giving them the information needed to take action. For over ten years we have been collecting information on beach access, surf zone water quality, beach erosion, beach fill, shoreline structures, beach ecology and surfing areas to get an understanding of the condition of our nation’s beaches. For 31 U.S. coastal states and territories we looked at the availability of public information on these “beach health indicators” and also evaluated the status of the indicators. In 2009 we added information on the Canadian province of British Columbia.

In our report we point out the states that have model coastal programs to protect our coastal resources and those that need to modify policies or implement new programs to ensure that beaches and a clean, healthy ocean are available for our grandchildren to enjoy.


Why State of the Beach?

Surfrider Foundation has been producing/compiling a State of the Beach report for over ten years. Why do we do this and where did the original inspiration for the report come from? Well, in 1999 - 27 years after adoption of the Coastal Zone Management Act (CZMA) and about 20 years after approval of most state CZM programs - the journal Coastal Management published a series of articles that reported on the effectiveness of various aspects of coastal zone management. The lead article was “The Effectiveness of Coastal Zone Management in the United States” by Marc J. Hershman, James W. Good, Tina Bernd-Cohen, Robert F. Goodwin, Virginia Lee, and Pam Pogue. This article pointed out the difference between coastal program effectiveness evaluations and “outcome monitoring,” which measures whether the status of the coastal resource has changed for the better or worse. In other words, development and implementation of a “well defined and structured process” by coastal management agencies was serving as a proxy for evaluations of whether the coast was actually being protected by the program.

Why was this? To quote the article:

“…[there was] scarcity of data for many of the outcome indicators… When available, the data were often of poor quality and lacked comparability. This was not unexpected, because there is no outcome monitoring requirement for assessing coastal program performance, nor was there a requirement for baseline data when programs were first set up.” (emphasis added)

Outcome data were lacking for beaches and dunes, coastal access, water quality, and several other parameters. There was even “…difficulty [in] knowing what constitutes an outcome indicator for a core objective.”

“…outcome monitoring is the missing piece in the 20 years of assessing the performance of the CZM system” and recommended “Congress should require an outcome monitoring and reporting system and provide the resources for its implementation. This is the only way that on-the-ground outcomes from the national investment in CZM can be credibly measured.”

To summarize, 20 years after implementation of state CZM programs, no one (not NOAA, not the states) had any idea whether their work was actually protecting beaches, improving public beach access, improving water quality or achieving the goals of the CZMA.

The criteria are generally a poor-fair-good 1-10 scale based on the availability of information for the indicator and a similar scale for indicator status based upon parameters such as number of public beach access points per mile, number of beach closures, percentage of armored coastline, and other factors more fully explained in the methodology section of this report.

We realized when we started this endeavor that we were entering uncharted territory and that much of the data we needed to write the report and complete our evaluations would be difficult to find or simply non-existent. Although this has proved to be true, we strongly believe the exercise of establishing our BHIs and criteria has been and continues to be of value in promoting the concept of coastal indicators, furthering the national dialog on this subject and allowing our online report to act as a living, expanding “coastal encyclopedia” so that state CZM managers, staff and the general public can compare state programs, learn from each other, and make progress in management of the coastal lands and waters of the nation’s coastal zone.

Fortunately, we have had the continued cooperation of many within the CZM community in compiling and updating information in our report so that it reflects not only the most current information, but also the “state of the art” in coastal policies, management techniques and information technologies. Geographic coverage in our report has expanded from 16 coastal states to all 30 coastal states, the territory of Puerto Rico and and the Canadian Province of British Columbia. The number of BHIs has grown from six to nine.

In the 15 years since the referenced articles, and 14 years since we began publishing our State of the Beach report, have we made progress in managing/protecting our coastal resources? Or, can we at least say that we are starting to do a better job of collecting the data necessary to answer the first question? Our answers to the two questions are:

Compared to 14 years ago, we have, in many states:

Another plus has been issuance of reports by the Pew Oceans Commission and the U.S. Commission on Ocean Policy, whose recommendations are now being consolidated and advanced by the Joint Ocean Commission Initiative. The issues and recommendations of these two reports have served to greatly increase the public and governmental awareness of serious coastal issues that those of us in the CZM and NGO communities have been aware of for many years.

Unfortunately, the “victories” where we have provided more access, improved water quality, or protected coastal resources (when we can measure them) are infrequent and scattered. It will take the continued, combined efforts of all of us who care about protecting our coasts to “turn the tide” and begin the process of restoration and improvement within the coastal zone.