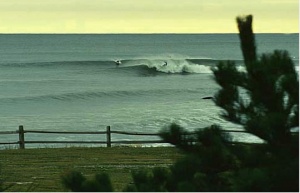 Dave Krum gazed longingly at the sunlit waves churning the ocean on the north side of Montauk State Point Park. The tableau, which included the historic Montauk Point Lighthouse, looked almost too perfect, like a grandiose painting at a starving artists’ sale. Mr. Krum appreciated the beauty of the scene, but mostly he wanted to grab his surfboard and jump in — a possibility that has been legal for surfers for only two months, since a change in park rules.

But the wind was not standing the waves up, and they were not breaking properly off the point. Mr. Krum, 47, a bike shop owner from Sag Harbor, continued to stare into the distance as if hoping for a miracle. None materialized.

Only a few days remain until the end of the season for wave riders to legally appreciate the distinctive waters at the end of Long Island, which they call the North Bar. The regulation change granting official access, a compromise in a long-running dispute with fishermen, allows them to use the area from Dec. 16 to March 31.

The decision, by the State Office of Parks, Recreation and Historic Preservation, is considered long overdue by these sea-loving sportsmen, who argue that although it is not a surfing mecca, Long Island can get beautifully gnarly at times.

“When this place is on, it’s as good as any place in the world for surfers,” said Mr. Krum, an inveterate surfer who grew up in Montauk. “It’s just not on enough.”

A dozen surfing areas exist along the length of Long Island, from Montauk’s Ditch Plains, which draws surfboard traffic jams, to Long Beach in Nassau County, a city 100 miles to the west and a short drive from Manhattan that offers a 3 ½-mile stretch of curling waves.

The decision to officially open Montauk Point to surfing was made without fanfare in January by Ron Foley, director of the Long Island region of state parks, who said he and his staff had been “mulling it over for some time.”

“It’s the best compromise at the moment,” he said. “Whether it placates everybody, I don’t know.”

It is part of a continuing struggle between surfers, who have argued for more beach access for years, and surfcasters, who fish from shore and generally want such areas restricted for themselves, contending that surfers interfere with their fishing.

At the North Bar, surfers have routinely sneaked into the area to pursue their passion despite a prominent sign that stated they could not surf in the area, said Eugene Alper, an East Hampton seafood trader and chairman of the surfing advisory committee of the Eastern Long Island chapter of the Surfrider Foundation.

Two years ago, eight surfers — they called themselves the Montauk Eight — were hauled out of the water here and ticketed by the New York State Park Police. The tickets were dismissed last year by an East Hampton town judge, who said the prohibition against swimming off Montauk Point did not extend to surfing.

At first, park officials vowed to continue enforcing the ban. Then came the decision by Mr. Foley.

“Hundreds of them would show up and try to take it over,” William A. Young, a Massapequa resident and president of the Montauk Surfcasters Association, said of those times when the surf was up at Montauk Point. “Not everybody, but there’s always a few bad apples.”

Much of the potential conflict between surfers and fishermen has been eased because of the dates set for legal surfing: The season for striped bass — the Point’s most alluring prize — runs from April 15 to Dec. 15. A 76-pound striper, the state record, was caught off Montauk in 1981. But surfcasters seek other fish year round, including bluefish and Atlantic cod.

The surfcasters’ group, which has opposed surfer intrusion in the past, has no objection to the new ruling so long as the surfers abide by it, Mr. Young said. “Generally in the winter, it’s not a problem,” he said, adding, “But they don’t seem to know when March 31 is.”

Conflicts between the two groups will dissipate over time, Mr. Alper said.

“Surfers and fishermen are becoming one and the same with the new generation of beach lovers we’re seeing now,” he said. “Most vehicles you see in summertime have both fishing poles and surfboards on them.”

For people like P. Claire Pertalion, who discovered surfing six years ago and is now co-chairwoman of the Surfrider Foundation chapter, the new beach access has simply expanded her opportunity to “get stoked” on the water.

“It’s the best physical activity I’ve ever had in my life,” she said. “It’s like flying across water. You just want to do it again and again and again.”

Ms. Pertalion, a 40-year-old former production manager from North Carolina, used to make commercials for companies like McDonald’s and Budweiser and said she took a “serious hit” financially when she moved to Montauk three years ago. But now she is near the beach and the waves all the time.

How can wave lovers brave the freezing temperatures of winter to pursue their sport? The answer, surfers say, is today’s neoprene wet suits, which help keep in body heat by trapping a layer of water against the skin.

It also helps to be rugged or slightly obsessed. Or both.

Ms. Pertalion said she tries to catch a wave whenever the sun is out, no matter what the temperature. “I was paddling out one day last year in the winter with my boyfriend, and I said if you’d told me 10 years ago I’d be doing something like this, I’d have said you were crazy,” she said. “But you do what you love.”

A similar description of surfing euphoria came from Mr. Krum, whose face was accented by a salt-and-pepper goatee, wraparound sunglasses and three earrings, all framed inside a black hooded sweatshirt.

“It’s just one of those things that grabs hold of you,” he said. “Once you get stoked, you’re always looking for waves. It can be snowing or freezing out, but it doesn’t matter.”

Mr. Krum said that he had tried living inland, including a stint in Colorado, but discovered that he could not stay away from Long Island and the ocean. Now, he rises every day at dawn, checks weather conditions and heads to the beach. If he cannot surf, he walks the shoreline. Being at Montauk Point is indeed a beautiful thing. 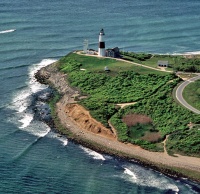 “This,” he said with the nod of a man who has found his nirvana, “is my spot.”

This article originally appeared in the New York Times on March 25, 2009.

Read more on the surfing access issue at Montauk.