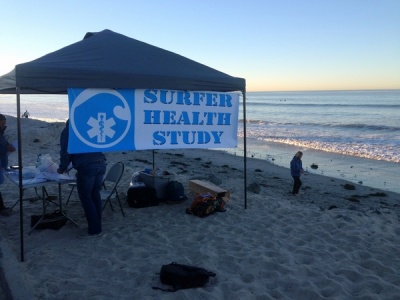 Surfrider Foundation collaborated with scientists at Southern California Coastal Water Research Project (SCCWRP); University of California, Berkeley, School of Public Health; and Soller Environmental to conduct a first-of-its-kind study of surfer health during both wet and dry conditions. The Surfer Health Study (SHS) built upon the work of Dwight, et al (2004) who performed a study of surfer health in north Orange County and Santa Cruz County during the winters of 1998 and 1999. That study suggested that discharging untreated urban runoff onto public beaches can pose health risks, and that those risks increased during wet weather.

To attempt to quantify those risks and examine the relationship between water quality and a range of reported health outcomes, surfers were recruited both on the beach and online and their surfing sessions and health effects were tracked during the winters of 2013-2014 and 2014-2015. The study was conducted at two San Diego-area beaches, Ocean Beach and Tourmaline Surfing Park. These beaches were selected because of their year-round popularity as surf spots, and also because each location had a nearby source of stormwater and dry weather urban runoff. San Diego River discharges to the ocean at the north end of Ocean Beach and Tourmaline Creek/Storm Drain discharges to the ocean near the primary surfing area at Tourmaline Surfing Park in Pacific Beach.

Surfers reported data on their surf sessions (date, time, length of session, location, surf and weather conditions) and illness or other health symptoms using a smartphone app developed for the project or via a website. Participants received text message or email reminders weekly to enter their data for the previous week. Scientists at SCCWRP and UC Berkeley evaluated the data and determined if correlations existed between water quality and reported illnesses, during both dry and wet weather.

The goals of the study were to answer the following questions:

The general answers were: 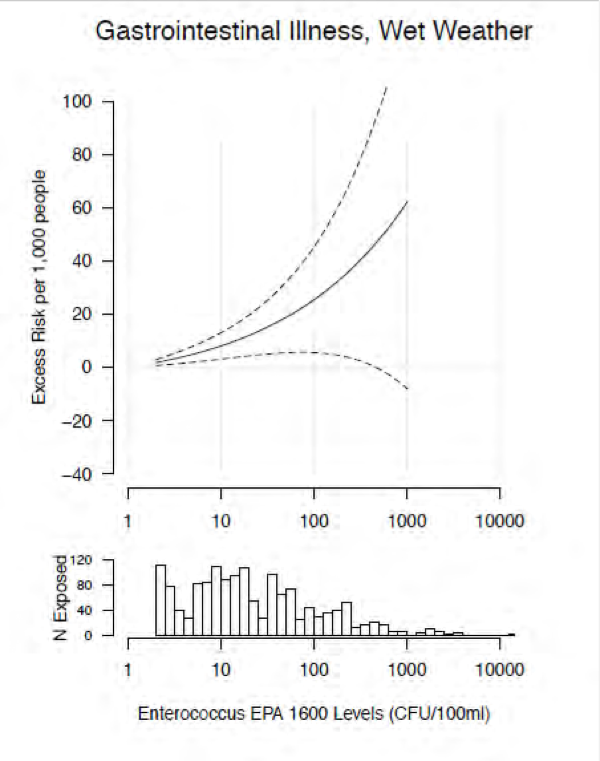 Other significant findings of the study were: 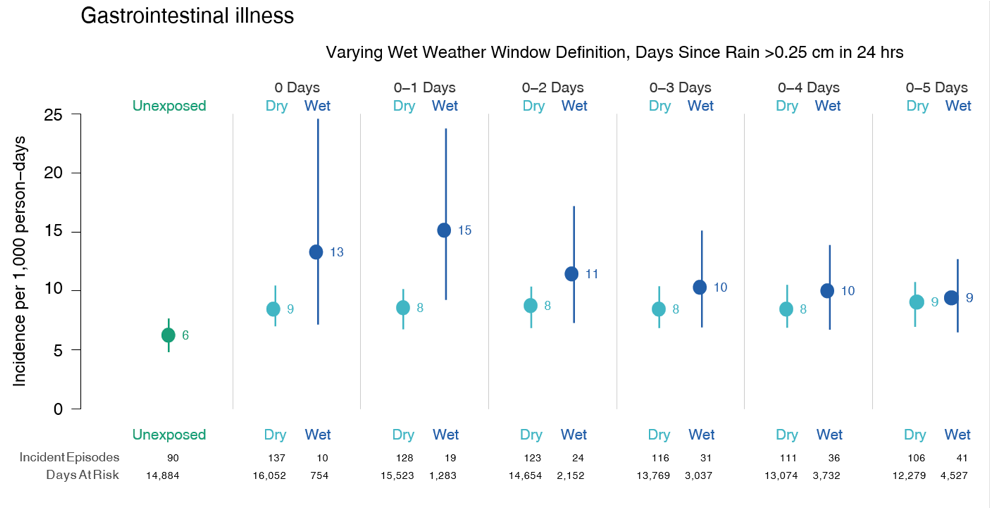 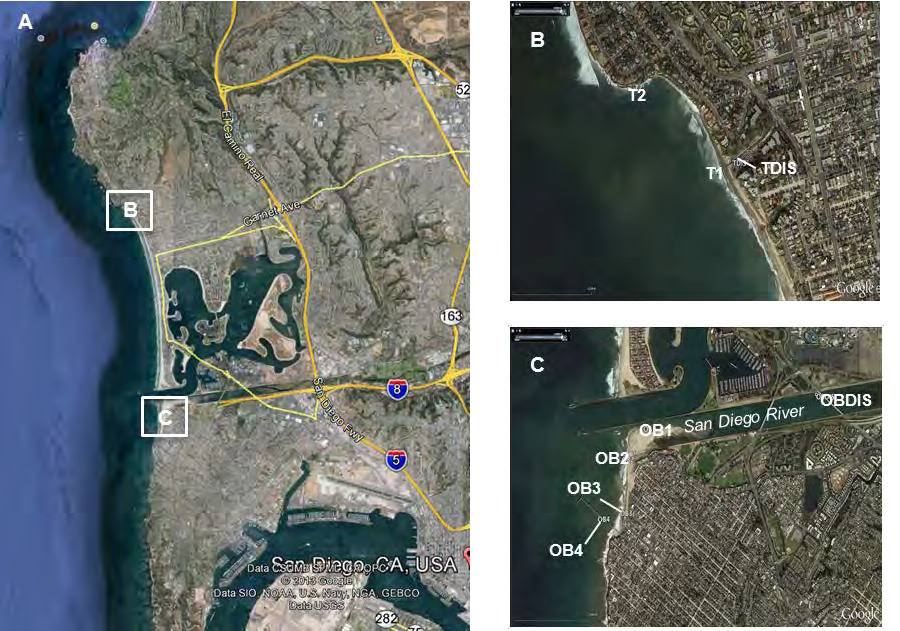 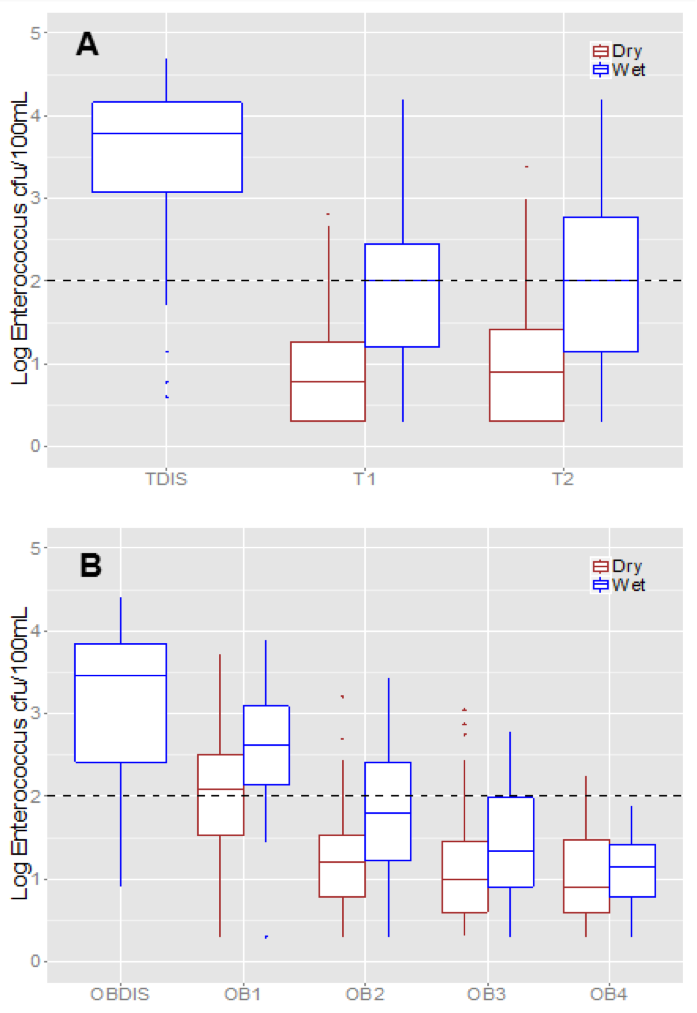 Figure 2. Box plots1 of cultured Enterococcus concentrations in wet2 versus dry weather at (A) Tourmaline Surfing Park and (B) Ocean Beach3 during the 2013-14 and 2014-15 wet season.
1 Boxes represent median, 25 and 75 percentile, 3 times the standard deviation, and individual outlier samples.
2 Wet weather defined by the County Health Department as >2.5 mm precipitation in 24 hr plus three days.
3 See Figure 1 for sampling site locations.

It also should be noted that inherent differences exist between previous swimmer health studies and the Surfer Health Study. These include:

As a result of the study, policy managers at local, regional and state levels will evaluate whether it is appropriate to make any changes in beach water quality standards or public health notifications. The City of San Diego and other appropriate entities are conducting investigations in the San Diego Creek and Tourmaline Creek watersheds to try to identify and eliminate sources of fecal pollution.

Surfrider Foundation will continue to be involved in these policy discussions and investigations to work towards improved water quality and public health protection.