The following article was adapted from NOAA's brochure Tsunami: the Great Waves.

The phenomenon we call "tsunami" is a series of traveling ocean waves of extremely long wavelength (distance between waves) generated by disturbances associated primarily with earthquakes occurring below or near the ocean floor. Underwater volcanic eruptions and landslides can also generate tsunamis. In the deep ocean, their length from wave crest to wave crest may be a hundred miles or more but with a wave height of only a few feet or less. They cannot be felt aboard ships nor can they be seen from the air in the open ocean. In deep water, the waves may reach speeds exceeding 500 miles per hour. 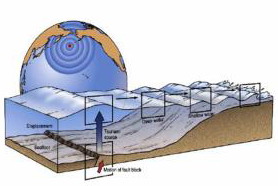 Tsunamis are a threat to life and property to anyone living near the ocean. For example, in 1992 and 1993 over 2,000 people were killed by tsunamis occurring in Nicaragua, Indonesia and Japan. Property damage was nearly one billion dollars. The 1960 Chile Earthquake generated a Pacific-wide tsunami that caused widespread death and destruction in Chile, Hawaii, Japan and other areas in the Pacific. Large tsunamis have been known to rise over 100 feet, while tsunamis 10 to 20 feet high can be very destructive and cause many deaths and injuries. The horrendous March 2011 earthquake and tsunami in Japan killed thousands.

The 1992 Nicaragua tsunami may have been the result of a "slow" earthquake comprised of very long-period movement occurring beneath the sea floor. This earthquake generated a devastating tsunami with localized damage to coastal communities in Nicaragua.

Not all earthquakes generate tsunamis. To generate tsunamis, earthquakes must occur underneath or near the ocean, be large and create movements in the sea floor. A strike-slip fault where the movement of adjacent plates is primarily horizontal is not likely to cause a tsunami. The San Andreas Fault in California is an example of a strike-slip fault. On the other hand, faults along subduction zones, where one plate is being pushed under another and the movement in an earthquake is primarily vertical, do have the potential top create tsunamis. The subduction zone off the Washington Coast where the Juan de Fuca plate is sliding under the North American Plate is an example of a subduction zone. All oceanic regions of the world can experience tsunamis, but in the Pacific Ocean there is a much more frequent occurrence of large, destructive tsunamis because of the many large earthquakes along the margins of the Pacific Ocean.

About two-thirds of the earth is covered by the waters of the four oceans. The Pacific Ocean is the world's largest, covering more than one third of the total surface area of our planet. The Pacific Ocean is surrounded by a series of mountain chains, deep ocean trenches and island arcs, sometimes called a "ring of fire."

The great size of the Pacific Ocean and the large earthquakes associated with the "ring of fire" combine to produce deadly tsunamis.

In less than a day, these tsunamis can travel from one side of the Pacific to the other. However, people living near areas where large earthquakes occur may find that the tsunami waves will reach their shores within minutes of the earthquake. For these reasons, the tsunami threat to many areas (Alaska, the Philippines, Japan or the U.S. West Coast) can be immediate (for tsunamis from nearby earthquakes taking only a few minutes to reach coastal areas) or less urgent (for tsunamis from distant earthquakes taking from 3 to 22 hours to reach coastal areas).

The continents and sea floor that cover the earth's surface are part of a world-wide system of plates that are in motion. These motions are very slow, typically only about an inch or two per year. Earthquakes occur where the edges of plates run into one another. Such edges are called fault lines or faults. Sometimes the forces along faults can build-up over long periods of time so that when the rocks finally break an earthquake occurs. Examples of features produced by forces released along plate edge faults are the Andes Mountains in South America (on land) and the Aleutian Trench near Alaska (under water). When powerful, rapid faulting occurs underneath or near the ocean, a large earthquake is produced and, possibly, a tsunami.

The deep ocean trenches off the coasts of Alaska, the Kuril Islands, Russia, and South America are well known for their violent underwater earthquakes and as the source area for destructive Pacific-wide tsunamis.

The tsunami generating process is more complicated than a sudden push against the column of ocean water. The earthquake's magnitude and depth, water depth in the region of tsunami generation, the amount of vertical motion of the sea floor, the velocity of such motion, whether there is coincident slumping of sediments and the efficiency with which energy is transferred from the earth's crust to ocean water are all part of the generation mechanism.

In the open ocean a tsunami is less than a few feet high at the surface, but its wave height increases rapidly in shallow water. Tsunamis wave energy extends from the surface to the bottom in the deepest waters. As the tsunami attacks the coastline, the wave energy is compressed into a much shorter distance creating destructive, live-threatening waves.

In the deep ocean, destructive tsunamis can be small--often only a few feet or less in height--and cannot be seen nor can they be felt by ships. But, as the tsunami reaches shallower coastal waters, wave height can increase rapidly. Sometimes, coastal waters are drawn out into the ocean just before the tsunami strikes. When this occurs, more shoreline may be more exposed than even at the lowest tide. This major withdrawal of the sea should be taken as a warning of the tsunami waves that will follow. Tsunamis often present themselves more as "rapid extreme tides" than as a true wave. The water level along the shoreline may cycle from extreme low tide to extreme high tide in a matter of 10 or 15 minutes rather than the typical six hours or so between a "normal" low and high tide. 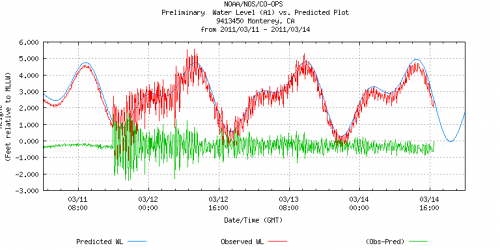 The graph to the right shows tides along the coast of Monterey, California in March 2011 during the period following the generation of a tsunami off the coast of Japan on March 11, 2011. The blue line shows the predicted normal tides and the red line shows the observed tides. As can be seen, the perturbations continued for at least two days after the initial tsunami.

A large tsunami that caused widespread death and destruction throughout the Pacific was generated by an earthquake located off the coast of Chile in 1960. It caused loss of life and property damage not only along the Chile coast but in Hilo, Hawaii and as far away as Japan. The Great Alaskan Earthquake of 1964 produced deadly tsunami waves in Alaska, Oregon and California.

In July 1993, a tsunami generated in the Sea of Japan killed over 120 people in Japan. Damage also occurred in Korea and Russia but not in other countries since the tsunami wave energy was confined within the Sea of Japan. The 1993 Sea of Japan tsunami is known as a "local event" since its impact was confined to the nearby regional area in the proximity of the earthquake that generated the tsunami. For people living along the northwestern coast of Japan, the tsunami waves followed the earthquake within a few minutes. Local tsunamis also occurred in Nicaragua (1992), Indonesia (1992, 1994) and the Philippines (1994) killing thousands of people. Scientific studies indicate that local tsunamis generated off the northern California, Oregon and Washington coast can arrive within five to 30 minutes after the earthquake is felt.

Where the ocean is over 20,000 feet deep, unnoticed tsunami waves can travel at the speed of a commercial jet plane, nearly 600 miles per hour. They can move from one side of the Pacific Ocean to the other in less than a day. This great speed makes it important to be aware of the tsunami as soon as it is generated. Scientists can predict when a tsunami will arrive since the speed of the waves varies with the square root of the water depth. Tsunamis travel much slower in shallower coastal waters where their wave heights begin to increase dramatically.

Offshore and coastal features can determine the size and impact of tsunami waves. Reefs, bays, entrances to rivers, undersea features and the slope of the beach all help to modify the tsunami as it attacks the coastline. When the tsunami reaches the coast and moves inland, the water level can rise many feet. In extreme cases, water levels have risen to more than 50 feet for tsunamis of distant origin and over 100 feet for tsunami waves generated near the earthquake's epicenter. The first wave may not be the largest in the series of waves. One coastal community may see no damaging wave activity while in another community destructive waves can be large and violent. The flooding can extend inland by 1000 feet or more, covering large expanses of land with water and debris.

Since scientists cannot predict when earthquakes will occur, they cannot determine exactly when a tsunami will be generated. However, by looking at past historical tsunamis, scientists know where tsunamis are most likely to be generated. Past tsunami height measurements are useful in predicting future tsunami impact and flooding limits at specific coastal locations and communities. Historical tsunami research may prove helpful in analyzing the frequency of occurrence of tsunamis and their relationship to large earthquakes.


Can You Surf Tsunamis?

The conventional answer to this question is no, for a variety of reasons, including the speed of tsunami waves and the fact that they are more akin to a very fast tidal surge than a normal ocean wave. However, champion surfer Felipe Pomar and a friend are credited with surfing a tsunami in Peru in 1974.

The objective of the PTWS is to detect, locate and determine the magnitude of potentially "tsunamigenic" earthquakes occurring in the Pacific Basin or its immediate margins. Earthquake information is provided by seismic stations operated by PTWC, ATWC, the U.S. Geological Survey's National Earthquake Information Center and international sources. If the location and magnitude of an earthquake meet the known criteria for generation of a tsunami, a tsunami warning is issued to warn of an imminent tsunami hazard.

If a significant tsunami is detected by sea-level monitoring instrumentation, the tsunami warning is extended to the entire Pacific Basin. Sea-level (or tidal) information is provided by NOAA's National Ocean Service, PTWC, ATWC, university monitoring networks and the other participating nations of the PTWS. The International Tsunami Information Center, part of the Intergovernmental Oceanographic Commission, monitors and evaluates the performance and effectiveness of the Pacific Tsunami Warning System. This effort encourages the most effective data collection, data analysis, tsunami impact assessment and warning dissemination to all TWS participants.

Tsunami watches, warning, and information bulletins are disseminated to appropriate emergency officials and the general public by a variety of communication methods.

What You Should Do

If You Are on a Boat or Ship

As dangerous as tsunamis are, they do not happen very often. You should not let this natural hazard diminish your enjoyment of the beach and ocean. But, if you think a tsunami may be coming, the ground shakes under your feet or you hear there is a warning, tell your relatives and friends, and move quickly to higher ground.

Also see this article and the following animated video, The Science of Tsunamis:

Interview with James Goff, professor of tsunami science at the University of New South Wales