In March 2011 Japan was struck by a large earthquake and resultant tsunami that killed thousands of people, resulted in billions of dollars in property damage and caused the release of radioactivity from several nuclear power plants. The tsunami swept a tremendous amount of debris into the ocean, including buildings, boats, automobiles and numerous smaller items.

Prevailing ocean currents are carrying the “tsunami debris field” eastward across the Pacific Ocean towards the West Coast of the United States and Canada. As time passes, the debris has dispersed and is no longer visible from satellites as a concentrated debris field. Some of the debris was originally predicted to reach the northwestern Hawaiian Islands as early as the 2011-2012 winter, approach the West Coast of the United States in 2013, and circle back to the main Hawaiian Islands in 2014 to 2016. Some very light floatable objects may travel faster. In fact, a float from Japan was found on the beaches of Washington in December 2011. The transport time of the float was no doubt sped up by prevailing winds, while heavier items will move more slowly. 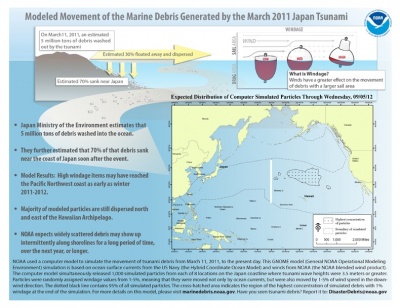 Transport of the debris field items is not necessarily a straight path west-to-east path. The North Pacific Gyre will capture some of the debris, where it could slowly spin in a clockwise direction for many years. The Hawaiian Islands will be impacted, as well as other islands in the northern Pacific Ocean.

Since the debris consists of a wide variety of items of different sizes and materials of construction (wood, metal, glass, plastic), the travel times and trajectories will vary and are therefore difficult to predict. Some materials will sink, some will decompose, and others will make it to our beaches.

Perhaps one of the most common concerns is whether the debris might be radioactive. Here is NOAA’s response:

“There is consensus among scientists that this is highly unlikely, for several reasons:

Surfrider Foundation chapters in Hawaii and on the West Coast have been closely following the release of information concerning the tsunami debris. Our Kauai Chapter helped organize a one-day seminar which brought together experts, our Olympic Peninsula Chapter in Washington hosted a meeting with a prominent oceanographer (where it was revealed that a float from Japan had reached our shores) and have conducted debris removal efforts, and our Oregon Chapters have partnered with another local group and Oregon Sea Grant on a NOAA grant application to coordinate a statewide effort for cleanup response and monitoring. Surfrider and our partners scheduled and conducted a series of workshops in April 2012. We did this again in 2013. We worked with state agencies and other NGOs in Oregon to produce a frequently-asked questions brochure on tsunami debris. We’ve also followed the NOAA webinars and we'll be taking notes from the experiences in Hawaii given that they may get hit with the first wave of debris. Read more.

Debris that may have originated in Japan began to appear on the beaches of the Long Beach Peninsula, Washington in March 2012. The debris consisted of floats and other light materials whose transport may have been accelerated by prevailing winds. A soccer ball and volleyball which may have come from the tsunami zone in Japan were found on the beach of Middleton Island, Alaska in April 2012. Much more tsunami-related debris was found along the beach at Gore Point, the southeastern-most point of the Kenai Peninsula, in August 2012. A large floating dock from Japan was washed ashore at Agate Beach, Oregon in June 2012. More debris was noted on Alaska's beaches in January 2013 and on Oregon's beaches in April 2014.

In March 2012 the Premier of British Columbia and the governors of Oregon, Washington and California announced that they would collaborate to manage potential marine debris from the March 2011 earthquake and tsunami in Japan that may wash up along the West Coast. The leaders and representatives met at the annual Leaders Forum of the Pacific Coast Collaborative in Vancouver, British Columbia and agreed to work together by:

They also published a Work Plan.

In December 2012 the government of Japan announced that they would give $5 million to the U.S. to clean up debris expected to wash ashore from the March 2011 earthquake and tsunami in Japan. The funds, donated to the National Oceanic and Atmospheric Administration's Marine Debris Program, will be used for removal of debris, disposal fees, cleanup supplies, detection and monitoring.

Although it is not specifically related to assessing the impact of the Tsunami Marine Debris on the West Coast, the West Coast Governors Alliance on Ocean Health (WCGA) Marine Debris Action Coordination Team (ACT) has released a request for proposal to develop a West Coast-wide marine debris database to assist with the implementation of the West Coast Marine Debris Strategy. Elements of the scope of work include preparing a workplan, developing and testing a database prototype, introducing the prototype to Marine Debris ACT members and stakeholders and solicit input, finalize and populate the database with data and documents, and transition the database and ensure it is operational and available for public use.

Here's a blog post on the subject of tracking the tsunami debris from our friends at 5 Gyres. There was a 5 Gyres/Algalita voyage across the North Pacific to track the tsunami debris field beginning May 1, 2012 for three weeks to Japan, then another 4 weeks to sail back to Hawaii.

Information on significant marine debris sightings in the North Pacific Ocean and on the coast is greatly needed and can be reported to the NOAA Marine Debris Program at DisasterDebris@noaa.gov.

If you who wish to contribute to the collection of baseline marine debris information, consider downloading and using the Marine Debris Tracker smartphone application to record, visualize, and share data. Another option is Coastbuster, an app for Android to report large, unusual and potentially hazardous marine debris.