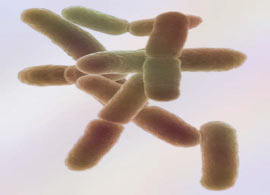 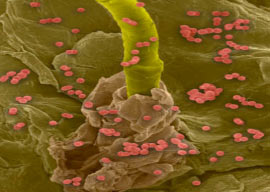 Bacteria are often cited as the causes of human and animal disease, yet there are also benign bacteria and even beneficial bacteria that are essential for human health, as well as healthy soils, plants and animals.

When we think of bacteria, especially with respect to beach water quality and beach sand, we are usually concerned about the bacteria that cause infections and disease. Some examples of harmful bacteria include Leptospira, which can cause the serious disease leptospirosis in both livestock and humans; and pathogenic strains of Escherichia coli ("E. coli"), which can cause severe illness from recreating in or consuming contaminated water and consuming contaminated food.

Alternatively, certain bacteria, the actinomycetes, produce antibiotics such as streptomycin and nocardicin. Others live symbiotically in the guts of animals (including humans) or elsewhere in their bodies, or on the roots of certain plants, converting nitrogen into a usable form. Bacteria help to break down dead organic matter and they make up the base of the food web in many environments.

This article discusses "indicator bacteria" which may or may not be pathogenic (cause disease), but whose presence in water has been correlated with the presence of other bacteria, viruses, or protozoa that do cause disease. Historically, several classes of bacteria have been used for water quality monitoring, including total coliform, fecal coliform, E. coli, and enterococcus.

The quality of marine and other recreation waters is usually determined through testing for the presence of one or more "indicator bacteria." The indicator bacteria that are most commonly examined are called "Coliforms". Coliform bacteria originate from soils, plants and human and animal wastes. Although not all coliforms are harmful to humans, the presence of high numbers of coliforms in a water body is a good indicator that the water may be polluted with harmful microorganisms and viruses.

Fecal Coliforms are a specific kind of coliform bacteria that are found primarily in the intestinal tracts of mammals and birds. These bacteria are released into the environment through human and animal feces. The presence of fecal pollution may come from storm water runoff, pets and wildlife, and human sewage. If they are present in high concentrations in recreational waters and are ingested while swimming or enter the skin through a cut or sore, they may cause human disease (primarily gastroenteritis), infections or rashes.

One species of fecal coliform bacteria is the infamous E. coli bacteria, a specific strain of which has been linked to numerous foodborne illness outbreaks in the United States.

Used together, total coliform and fecal coliform bacteria levels are an important tool that help scientists determine whether it is safe to surf and swim at the beach. These indicator bacteria were the mainstay of water monitoring in the United States and elsewhere for several decades. In recent years, health studies have pointed to E. coli and enterococcus as being more closely correlated with disease than total and fecal coliform.

The enterococcus group is a subgroup of fecal streptococci bacteria. The enterococci portion of the streptococcus group is a valuable bacterial indicator for determining the extent of fecal contamination of recreational surface waters. Studies in marine and fresh waters indicate that enterococci are one of the best bacterial indicators of water quality. Enterococcus is a bacteria found in the human intestine and therefore a good indicator of human waste.

According to studies conducted by the EPA, enterococci have a greater correlation with swimming-associated gastrointestinal illness in both marine and fresh waters than other bacterial indicator organisms, and are less likely to "die off" in saltwater. In 1986, EPA set health-based national recreational water quality standards of 35 colony forming units (CFU) per 100 milliliters (ml) of beach water sampled (30-day average) or 104 CFU per 100 ml (single sample standard). The public was required to be notified if values exceeded these limits. Note: The IDEXX tests report results as Most Probable Number (MPN) per 100 ml, which is equivalent to CFU per 100 ml.

In late 2012, EPA published new Recreational Water Quality Criteria Guidance that kept enterococcus as the preferred indicator bacteria but modified the 30-day average and single-sample maximum thresholds, allowing states to set their own out of a variety of options.

To note, there have been studies identifying high densities of enterococcus and coliform bacteria in tropical soils, even without potential fecal sources. There is a research gap on the risks of these environmental sources of enterococcus and coliform. As Byappanahalli et al state in their 2012 paper, "[t]he mounting evidence for widespread extraenteric sources and reservoirs of enterococci demonstrates the versatility of the genus Enterococcus and argues for the necessity of a better understanding of their ecology in natural environments, as well as their roles as opportunistic pathogens and indicators of human pathogens."