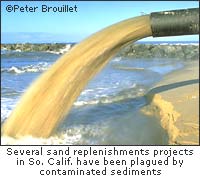 
What Are Contaminated Sediments?

Pollutants from industry, agriculture and urban runoff make their way through water to the sediments (matter that settles to the bottom of a liquid) in our rivers, lakes, and the ocean. Sediments contaminated with PCBs, dioxin, pesticides, heavy metals, hydrocarbons and other pollutants have been found in every coastal region of the United States. In a 1998 inventory, the Environmental Protection Agency (EPA) identified hundreds of problem sites around the country, many of them located in coastal areas. In fact, every major harbor in the nation suffers from moderate to severe sediment contamination, according to the EPA.


People, Fish and Wildlife at Risk

The contaminants found in sediments have already led to human health problems. Pollutants from poisoned sediments make their way into the food chain, accumulating in fish, ducks and other wildlife. Eventually these toxic chemicals wind up on our dinner plates.

Many fish populations are healthy and safe to eat, but Native Americans, low-income fishers and others who unknowingly eat fish (especially bottom-dwelling fish) from waters with polluted sediments are at risk.

Pollution of our waters and the sediments beneath them also harms wildlife. Scientists in the Great Lakes have studied the impact of contaminated sediments on wildlife and their discoveries are disturbing. The following deformities have been found in the Great Lakes region:

Every year the U.S. Army Corps of Engineers dredges about 400 million tons of sediments from our nation's rivers, harbors and estuaries, enough to cover a four-lane highway stretching from New York City to Los Angeles with 20 feet of mud. Not all dredged sediments are contaminated, but testing is revealing significant contamination in many ports and harbors, which need to be dredged to accommodate ship traffic. But dredging sediments that are contaminated can re-suspend pollutants in the water, further threatening the seafood and tourism industries that depend on healthy fish and clean water. Once mud is dredged, it must be disposed. Contaminated sediments should not be dumped in coastal waters or the Great Lakes. The difficulties of safely managing contaminated sediments makes it unwise to dredge in some areas.


What Can Be Done?

A great resource for information on contaminated sediments is on the website of Clean Ocean Action in New Jersey.