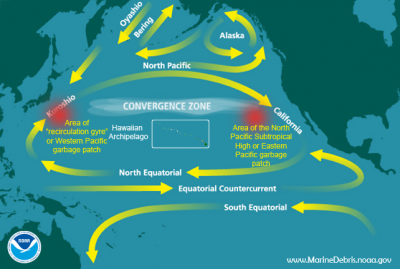 Most of the plastic debris in the Garbage Patch is from land-based sources and survives the long trip there because conventional plastic does not biodegrade and current bioplastics do not biodegrade in the marine environment. All current plastics only photodegrade in the marine environment, which limits them to breaking into smaller pieces and/or changing color over time as they are exposed to UV light.

Some people may envision a plastic island in the middle of the ocean but this 'Garbage Patch' could better be described as a weak plastic soup dispersed over a large area where plastics in various stages of degradation are suspended in the upper layers of the water column. Studies from Algalita Marine Research Institute and Scripps Seaplex have documented pelagic fish that are consuming plastic in and around the Garbage Patch.

Over time gyres can spit out debris that accumulates in them and an example of that can be seen on beaches in the Hawaiian Islands that face northeast. The plastic litter that accumulates there can be staggering. Photos of Laysan albatross carcasses with large amounts of plastic in their stomachs documented the deadly effects of plastic and motivated people to help with plastic reduction efforts.

People and groups have discussed cleaning up the Garbage Patch but it's really not practical. There are some great projects to help retrieve 'ghost nets' and other derelict fishing gear but much of the plastic is in such small pieces that other marine life would be impacted by a cleanup, negating any positive aspects.

The best solution for this issue is to stop feeding the Garbage Patch with plastic and stop litter at the source.

To learn more about this issue, read Plastic Ocean, a book by Captain Charles Moore. Also see NOAA's discussion of the Great Pacific Garbage Patches and the website of Five Gyres.

Note: As mentioned above, although the Great Pacific Garbage Patch is not a plastic island, a scientific exploration by Captain Charles Moore and other researchers with Algalita Marine Research Institute during 2014 did encounter what might be considered a plastic island. More on this here and in the pictures below. 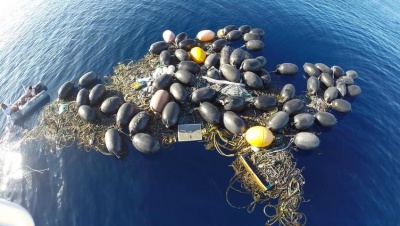 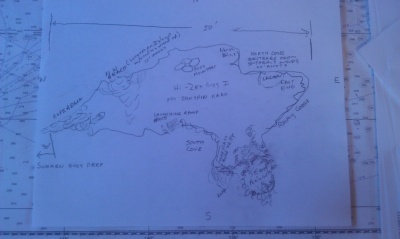