This page is available in multiple languages:
Gyre (English)
循環流

A Gyre is a system of circulating currents in an ocean, caused by the Coriolis Effect. 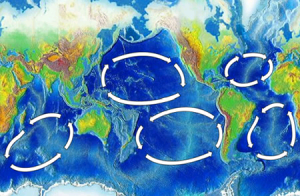 There are five major gyres in the world's oceans:

Because gyres are systems of circulating currents, they result in marine debris accumulation at their centers. The most famous example of this phenomenon is known as the Great Pacific Garbage Patch - a floating accumulation Marine Debris comprised largely of plastic trash located north of Hawaii.

In addition to the five major oceanic gyres, there are also smaller equatorial gyres in the Atlantic, Pacific, and Northern Indian Oceans.