Liquified Natural Gas (LNG) is natural gas that has been converted to liquid form for ease of storage or transport. Natural gas is converted to LNG by cooling it to -260° F, at which point it becomes a liquid. This process reduces its volume by a factor of more than 600 – similar to reducing the volume of a beach ball to the volume of a ping-pong ball. This allows natural gas to be transported by sea. Once it reaches an onshore or offshore terminal, LNG is unloaded from ships where it continues to be stored as a liquid until it is warmed to convert it back to natural gas. The natural gas is then sent through pipelines for distribution to businesses and homeowners.

The U.S. involvement in the global trade of LNG has changed substantially over the last decade. For instance, back in 2005, the U.S. was a net-importer of LNG, and domestic industry was in a rush to build import terminals (regassification terminals) in order to meet their current and expected future demand of natural gas. Then, by 2008, this trajectory took a sharp turn. Commonly referred to as "the U.S. shale boom", advances in technology, high prices for natural gas, and discoveries of huge reserves of now economically recoverable shale gas increased the U.S. production significantly, switching the nation into one of the largest net exporters of LNG in the world. 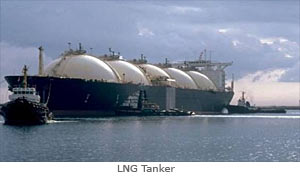 In 1964, the UK and France were buyers under the world's first LNG trade from Algeria. By 2018, global demand and trade of LNG has significantly increased, with 170 active LNG tankers. Australia, Qatar, and the U.S. are the largest exporters. Much of the demand is driven by Asian countries, where U.S. exports increased by 12 times in 2017.[1] In 2016, the Panama Canal was even expanded to accommodate the size of LNG tankers moving between U.S. and Asian ports.[2]

Due to the prevalence of shale deposits, many new LNG terminals are being proposed in the U.S. There are 13 approved and 16 proposed LNG port terminals, with the overwhelming majority designed for exporting U.S. sourced LNG. For instance, all of the proposed and 75% of the approved LNG ports are for export terminals. The proposals represent several different technologies and locations, including onshore, offshore floating terminals, offshore oil platform terminals, and gravity-based offshore ports.

Concerns over the safety of these facilities, plus various site-specific environmental concerns, have created extensive controversy in the regions where plans have been created to build such facilities. In the northeast, a controversial project included the Safe Harbor Energy artificial island, which was planned for 19 miles off the coast of New Jersey and 13 miles off the coast of New York, but was never built. However, there are three active LNG terminals in the region, and all of which are in or off the coast of Massachusetts. These include the Excelerate Energy LLC terminal, which is 13 miles southeast of Gloucester and became operational in 2008, and two older import terminals that have been active since the 1970's. Several previous terminal proposals along the coast of Maine have also been met with high levels of resistance and questions.

On the West Coast, a mix of factors have resulted in previously proposed terminals to be denied or withdrawn. Only one LNG terminal on the West Coast, in Coos Bay Oregon, is still under consideration but there is notable opposition from the local community. In Mexico, three terminals were approved and Sempra Energy's Energia Costa Azul facility near Ensenada, Mexico is under construction.

The majority of proposed LNG terminals are in the Gulf of Mexico (Texas, Louisiana, and Mississippi) where there are six terminals existing, 17 new LNG terminals recently approved, and 13 more being proposed.

The following are factors at work in the rush to build LNG facilities:

Permitting authority for LNG facilities can be complex and confusing. As mentioned above, LNG facilities have been proposed at both onshore and offshore locations. If they are offshore, they may be in either state (within three miles of the coast) or federal (greater than three miles from the coast) waters. Much of the information in the following paragraphs is from the website of the California Energy Commission that provides guidance on how permitting is handled in California. Although similar procedures are in effect in most other coastal states, the interaction between federal, state and local permitting does vary somewhat depending on the location.

In the siting process, one federal agency takes the lead role for environmental review under the NEPA, and one state or local agency takes the lead role under CEQA. Once the lead agency is identified, all other involved agencies, whether state or local, become responsible agencies. These responsible agencies do not prepare their own documents, but instead are required to consider the environmental document prepared by the lead agency.

However, in the permitting process of LNG facilities, the Energy Policy Act of 2005 (the Act) grants the Federal Energy Regulatory Commission (FERC) the exclusive authority to issue licenses for the siting, construction, operation, and modification of LNG import terminals onshore and in state waters, with limited exceptions. The exceptions involve the exercise of federally-delegated authority only under the federal Coastal Zone Management Act, the federal Clean Air Act, and the federal Clean Water Act by state or local agencies. The state also has the ability to be a cooperating agency with FERC during the NEPA review and can contribute to the environmental review. FERC works closely with the US Coast Guard, states, and local communities to evaluate the environmental, safety and security aspects of proposed and operating LNG terminals and tankers.

In federal waters, the Maritime Administration (MARAD) and the U.S. Coast Guard have siting and permitting jurisdiction for "deepwater ports." A deepwater port is defined under 33 U.S.C.S. § 1502(10), as "any fixed or floating man-made structures other than a vessel, or any group of such structures, located beyond the territorial sea and off the coast of the United States and which are used or intended for use as a port or terminal for the loading or unloading and further handling of oil for transportation to any State."

Some of the various permits that an applicant must obtain from the state for facilities onshore or in state waters include:

The Act does not grant the power of eminent domain to FERC; therefore, any state or local agency with public land stewardship responsibilities retains its authority to review and approve land lease applications, and the preparation of a CEQA document to support that decision. The Act does not impact the siting authority of state agencies reviewing offshore LNG import terminal applications. Summary of Issues That State Agencies Address in the Review of an EIS/EIR for an LNG Project (issues that relate directly to Surfrider Foundation initiatives are indicated in bold)

As mentioned above, safety concerns are at the forefront of much of the opposition to LNG facilities. If there were to be a leak or spill from an LNG tanker or liquid storage facility, the LNG would convert to a gas. As it diluted with air, the natural gas/air mixture would become potentially explosive when the concentration of natural gas in air reached between 3.8% and 17%. In this concentration range, any source of ignition (cell phone, cigarette lighter, attic fan, light switch, auto or boat engine spark plug, carpet spark, etc.) could ignite the vapor cloud and impact an area that could extend for several miles in diameter. This concern was one of the main reasons why a proposed LNG terminal in Long Beach, CA was rejected by the Long Beach City Council (see graphic below). 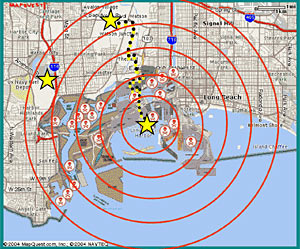 Besides the safety concerns, there are also concerns about the amount of additional air pollution that could be associated with LNG terminals. Potential sources of air pollution include the diesel-burning LNG tankers, the LNG storage and re-gasification facilities at the LNG terminal, and the air pollution generated when the re-gasified LNG is burned. This latter concern is relevant because some sources of LNG produce "hot gas" laden with compounds such as butane, propane and ethane that can cause substantially more nitrous-oxide pollution when burned than most domestic natural gas sources. As mentioned above, LNG facilities may be built offshore on onshore. Offshore facilities could have negative visual impacts, and they could also block waves if they are built as gravity-based structures (artificial islands) as opposed to a floating terminal or a structure built like an oil platform.

Since LNG terminals are major industrial facilities, they may not be compatible with existing coastal character and coastal-dependent uses. Additional environmental concerns include potential loss of coastal access, potential altering of coastal processes, and potential loss of surf spots. Construction of an onshore LNG facility may involve the building of breakwaters, jetties or other shoreline structures. As stated in Surfrider Foundation's Beach Preservation Policy:

Under no circumstances does the Surfrider Foundation support the installation of stabilization or sand retention structures along the coastline. Such structures can protect existing coastline development but have no place in beach preservation.

Breakwaters block waves and may interrupt the along-shore transport of sand. Jetties and groins also trap sand on the "upcoast" side and therefore frequently contribute to beach erosion problems downcoast.

Unfortunately, there is already a good example of many of these impacts at the recently-built (but rarely used) Costa Azul facility in Baja California which has destroyed a surf spot called Harry's.

Another environmental issue associated with LNG facilities is the use of seawater to convert the LNG from a liquid to a gas. Similar to the "once through cooling" issues that Surfrider and others have raised with respect to coastal power plants and Seawater Desalination facilities, seawater is often proposed to be used for "once through warming" of LNG. As the LNG is warmed and converted to natural gas, the ocean water is cooled. The effects of pumping ocean water through LNG facilities on marine life that may be entrained in the water of affected by the cold discharge should be evaluated. Some LNG facilities use a closed loop circulating fresh water system to re-gasify the LNG that would not have marine life impacts.

Beyond the site-specific issues at the numerous proposed LNG locations, many environmental groups have recommended that an assessment be performed to estimate the future need for LNG facilities nationally and/or in a given state or area before new facilities are permitted. Along with that, criteria should be developed for siting and for the technologies associated with the LNG facilities. There should be a coherent national and regional approach to addressing this significant issue.

This article is part of a series on Shoreline Structures looking at types of structures commonly built along shorelines, and the policies, laws, and regulations which can affect where and under what conditions they are built.

For information about laws, policies and conditions impacting shoreline structures in a specific state, please visit Surfrider's State of the Beach report to find the State Report for that state, and click on the "Shoreline Structures" indicator link.