The problem of plastics accumulating in the ocean has been widely documented, with 8 million metric tons (9 million tons)[1] to 11 million metric tons[2] of land-based plastics entering the world's ocean annually, in addition to hundreds of thousands of tons of abandoned plastic fishing gear (at least 640,000 tons),[3] termed "ghost gear", being left in our marine areas each year. Without a large-scale shift in the world's use and management of plastics, especially single use plastic, this will only get worse. In fact, some projections even indicate that there may be more plastic than fish in the ocean by 2050.

In recent years, the issue of tiny plastic particles, termed microplastics (5 mm or less in size), has gotten increasing attention. These microplastics are able to escape wastewater treatment plants and flow with the discharge water straight into our aquatic and marine areas, becoming bioavailable to wildlife from plankton to top tier predators. Some microplastics, like plastic microbeads, were actually designed to be micro sized to help with skin exfoliation, while other plastics, like plastic bottles and containers, start out as larger products but break down overtime into smaller and smaller plastic pieces.

But there’s another microplastic problem that may be even more concerning and harder to address, and it's showing up in our ocean, on our beaches, in the food we eat, in the water drink, and even in the air we breath, called plastic Microfibers. Efforts to combat this problem range from source reduction legislation, such as bans on plastic bags, polystyrene, and plastic cigarette filters; beach cleanups; and even the use of skimmer devices in harbors to much larger proposed cleanup devices in the open ocean.

The definition of microplastics has varied between research papers, so in an effort to standardize the definition of microplastics, the Southern California Coastal Water Research Project (SCCWRP) worked with global experts in the realm of microplastic research and the California State Water Resources Control Board, to officially establish the first agency-adopted definition: "solid polymeric materials to which chemical additives or other substances may have been added, which are particles which have at least three dimensions that are greater than 1 nanometer and less than 5,000 micrometers. Polymers that are derived in nature that have not been chemically modified (other than by hydrolysis) are excluded". Defining microplastics was the first step in a California state mandate (SB1422) set to establish (1) mandated monitoring of drinking water by 2021, and (2) a statewide management strategy for microplastics in the ocean off California. The next step will be developing standardized testing methods (currently in development) and determining heath-based guidance levels (learn more here). 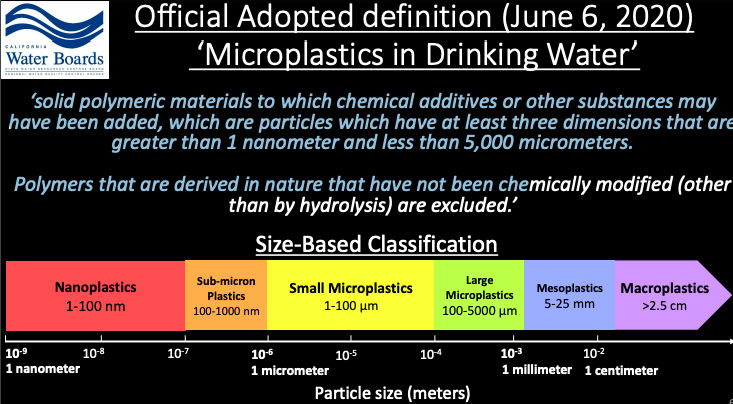 Beyond shorelines and beaches, researchers have started expanding studies to test for plastic microfibers in other areas, from the tissues and stomaches of marine life to drinking water sources, and the results all continue to point to the same result- plastic microfibers may be the most ubiquitous human-made pollutant. Studies have identified microplastics, including microbeads and microfibers, in: 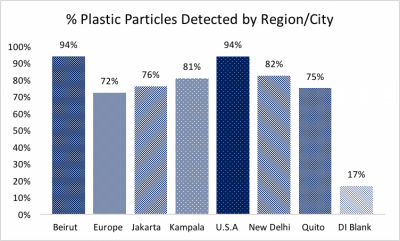 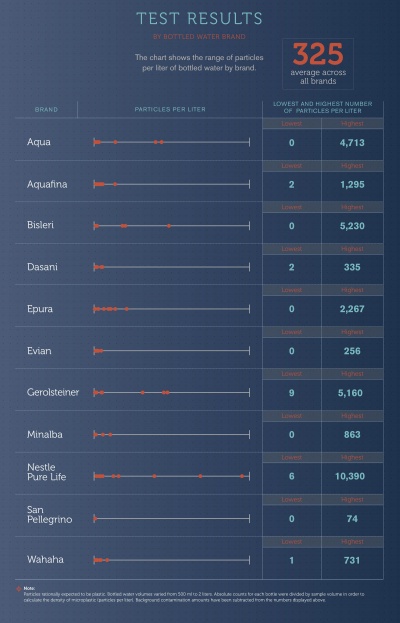 More research and data on ingested microplastics is needed, but so far we know that plastics can cause negative human health impacts, including DNA damage, endocrine disruption, cancer, and diabetes.[4] The EPA also found that “in controlled studies, these chemicals have been shown to release from plastic after it is ingested by a variety of marine species,” meaning that whatever consumes the plastic could also absorb the chemicals from the material. Not only are these chemicals harmful to the wildlife that consumes them, but many toxins are also known to bioaccumulate in the body. This means that they work their way up the food chain, eventually reaching humans.

Some direct excerpts from a report by the Marine Debris Program, NOAA, are particularly illuminating [5]:

Because microplastics are insidious in our daily lives, it’s no surprise that microplastics appear in the rain of protected lands in the United States.[6] While their impact on the ecological development of soil and natural life is under current research, the early indications of toxicity that related evidence poses is concerning beyond measure.

So what are the solutions? There appear to be no easy answers except reducing the use plastics at the source. As Kyle Van Houtan, chief scientist at Monterey Bay Aquarium and a co-author of a 2019 study on microplastics in water columns eloquently says “The ubiquitous presence of plastic pollution throughout the water column points to source reduction—making and using less plastic in the first place—as one of the most effective means of solving this issue... It may be virtually impossible to remove existing microplastic from the deep sea.. But when we slow the flow of plastic from land, we can help prevent the increasing accumulation of plastic in our global ocean.”

At the federal level, the Plastic Pellet Free Waters Act was introduced in September 2020. This act would require the EPA to finalize a rule within 60 days to, “Prohibit the discharge of plastic pellets or other pre-production plastic materials from facilities and sources that make, use, package, or transport those materials; and update all existing permits and standards of performance to reflect those prohibitions.”

See these articles to read more about legislative solutions for the most pernicious microplastics — Microfibers and Microbeads.