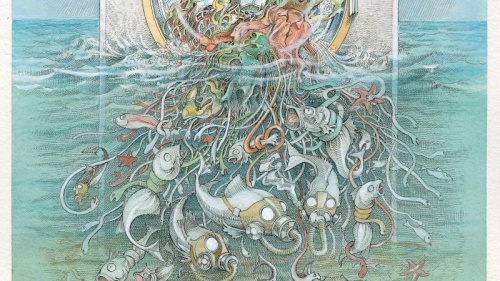 What Are Plastic Microfibers?

Plastic microfibers are a type of microplastic (plastic particle less than 5 mm) shaped as a fibrous material. Studies have found that the shape of these fibers can actually make them more harmful to marine or aquatic life than spherical microplastic beads, or other microplastics with smooth surfaces, because the fibers have greater surface area (more area for toxic substances to adhere to) and are better able to tangle and catch on to things.[1] Sources of plastic microfibers include synthetic apparel (clothing made with plastic threading instead of natural threading like cotton), plastic tarps, car tires, synthetic ropes and fishing gear, and more.


Why are Microfibers a Problem?

In 2011, British ecologist Mark Anthony Browne published a study, Accumulation of Microplastic on Shorelines Worldwide: Sources and Sinks describing the discovery of micron-scale synthetic fibers, mostly polyester and acrylic, in sediments along beaches around the world, with the highest concentrations appearing near wastewater-disposal sites. These findings strongly suggested that the microfibers came from apparel, a hunch he checked by finding 1,900 fibers in the filter of a washing machine after washing a single fleece jacket.

A similar study to test potential for and magnitude of plastic microfibers reaching and being released from wastewater treatment plants was conducted at VU University Amsterdam in 2012. Researchers estimated that laundry wastewater is sending around two billion synthetic microfibers per second into Europe’s waters. As test methods become more refined, the results are only getting more staggering. In 2016, a joint UC Santa Barbara and Patagonia study found that 250,000 microfibers can be shed from a single fleece jacket after just one wash. In the state of California alone, it is estimated that billions of microfibers escape wastewater treatment plants every day.

Fleece jackets are just one of the many products in the synthetic apparel industry, which is clothing partially made from virgin or recycled plastics that have been turned into tiny fibrous plastic materials. These microfibers can be as small as half the size of a red blood cell. When the source of the material is recycled plastics, microfibers have generally been considered an affordable and sustainable material that diverts plastics away from the landfill. Yet results from a variety of studies indicate that this recycled clothing technique may have been causing more harm than good.

Browne and several colleagues gathered sand samples from 18 beaches on six continents for analysis. Every beach tested contained microfibers, and nearly 80 percent were polyester or acrylic. Here is the abstract from Mark Browne’s study:

"Plastic debris <1 mm (defined here as microplastic) is accumulating in marine habitats. Ingestion of microplastic provides a potential pathway for the transfer of pollutants, monomers, and plastic-additives to organisms with uncertain consequences for their health. Here, we show that microplastic contaminates the shorelines at 18 sites worldwide representing six continents from the poles to the equator, with more material in densely populated areas, but no clear relationship between the abundance of microplastics and the mean size-distribution of natural particulates. An important source of microplastic appears to be through sewage contaminated by fibers from washing clothes. Forensic evaluation of microplastic from sediments showed that the proportions of polyester and acrylic fibers used in clothing resembled those found in habitats that receive sewage-discharges and sewage-effluent itself. Experiments sampling wastewater from domestic washing machines demonstrated that a single garment can produce >1900 fibers per wash. This suggests that a large proportion of microplastic fibers found in the marine environment may be derived from sewage as a consequence of washing of clothes. As the human population grows and people use more synthetic textiles, contamination of habitats and animals by microplastic is likely to increase.”

According to an article in Science,

“Not a single beach was free of the colorful synthetic lint. Each cup of sand contained at least two fibers and as many as 31. The most contaminated samples came from areas with the highest population density, suggesting cities were an important source of the lint.”

Studies continue to find vast amounts of plastic microfibers across the global marine environment. In 2019, a study by McEachern et al in Tampa Bay found an average of 1 microplastic per liter of ocean water, estimating that the entire bay contained four billion microplastics. Over 75% of the microplastics collected were microfibers. While there are many methods for sampling and evaluating microfibers, the McEachern study noted that discrete water samples were able to collect 200 times more microplastics than collecting samples via plankton nets. Due to the wide range in results from different sampling methodologies, the Southern California Coastal Water Research Project is working on a global initiative to standardize microplastic sampling and measurement methods.

Microplastics (including microfibers) are easily ingested by marine life which may end up on our dinner plates. Essentially the plastics we are washing down the drain with our laundry may work their way up the food chain and come back to haunt us.

Not only does the ingestion of these microfibers reduce the amount of nutrition obtained from feeding, it also poses an additional risk of harmful bacteria and toxic exposure. Of all chemicals known to be persistent in our environment, bioaccumulative in the food chain, and toxic to life (also known as PBTs), 78% are found in or on microfibers. As a result, the concentrations of PBTs in microfibers are orders of magnitude greater than the concentration of PBTs otherwise found in seawater. Examples of observed PBTs included pesticides like DDT, and plastic additives like brominated flame retardants.

Beyond risks from consumption, the sheer magnitude of the amount of microfibers throughout marine and coastal environments can have serious ecological implications. Studies have identified a reduction in oyster reproduction rates, and impacts to the sexual determination of baby sea turtles from the slowed warming rates of sandy sediment containing microfibers, among other effects.

The problem of microfibers is not just an ocean issue. When Sherri “Sam” Mason, a chemist with the State University of New York at Fredonia and a group from the Illinois-Indiana Sea Grant program took samples from southern Lake Michigan in 2013, about 12% of the debris consisted of microfibers. Mason’s research also indicated that microfibers seem to be getting stuck inside fish in ways that other microplastics aren’t. Microbeads and fragments that fish eat typically pass through their bodies and are excreted. But microfibers were enmeshed in the gastrointestinal tracts of some fish Mason and her students examined. Their study helped confirm the bioaccumulative ability of these fibers to move up the food chain by finding fibers inside a double-crested cormorant, a fish-eating bird.

When it comes to clothing and microfibers, one way to begin to address the problem is to try to make clothes that shed less plastic fibers when washed. In 2013, Browne launched a new project “Benign by Design,” to help reduce the number of microfibers released into the oceans. Working collaboratively with designers to create fabrics that were more durable and released less plastic waste during wash cycles, this project could help stop the problem of microfiber pollution at the source.

Industry has responded to the microfiber problem in a variety of ways. Many different devices for the home laundry machine are on the market. Some apparel companies, such as Patagonia, are researching alternative fabrics and construction technologies. The Outdoor Industry Alliance and the European Outdoor Group, collectively which represents over 1500 outdoor apparel companies, has a working group on the issue. [2]

Connecticut
In 2018, the CT General Assembly passed HB 5360 An Act Concerning Revisions to Certain Environmental Quality and Conservation Programs.[3] Section 6 of that bill established a working group of representatives from both the retail and apparel industry and the environmental community to focus on synthetic microfiber pollution. The working group submitted its final report in January 2020. The report did not include major policy recommendations, and new microfiber legislation has not been introduced in Connecticut.

New York
New York State Assembly Bill A10599 was introduced in 2018. [6] This bill proposed labeling for garments containing more than 50% synthetic fiber, indicating that they will contribute to microfiber waste. The purpose of this labeling is to encourage hand washing of certain materials. The labeling for customers would read, "This garment sheds plastic microfibers when washed. Hand washing recommended to reduce shedding." This bill did not pass, but there is interest in a similar bill being introduced in 2021.

Visit Surfrider's Bills and Best Practices for Microfiber Pollution Solutions Coastal blog to learn about ways to reduce your microplastic and plastic microfiber release, and check out this video from The Story of Stuff that discusses the microfiber issue.

Accumulation of Microplastic on Shorelines Worldwide: Sources and Sinks, Environmental Science and Technology, 2011.

Anthropogenic debris in seafood: Plastic debris and fibers from textiles in fish and bivalves sold for human consumption, Scientific Reports, 2015.

How much may German beers be contaminated by microplastics?, Science Daily, 2014.

Inside the lonely fight against the biggest environmental problem you've never heard of, The Guardian, 2014.

Microfibers: How the Tiny Threads in Our Clothes Are Polluting the Bay, KQED Science, 2016.

Oyster Reproduction Is Affected by Exposure to Polystyrene Microplastics, Proceedings of the National Academy of Sciences, 2016.

Oyster Reproduction Is Affected by Exposure to Polystyrene Microplastics, Proceedings of the National Academy of Sciences, 2016.

The Invisible Nightmare in Your Fleece, OutsideOnline, 2015.

Your clothes are polluting the ocean every time you do laundry, Treehugger, 2014.