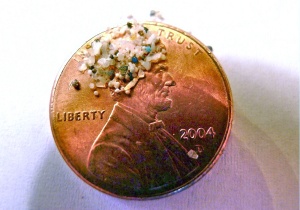 Microbeads are small to very small polyethylene or polypropylene spheres that are widely used in cosmetics, skin care and personal care industries.[1] They are most often used as exfoliants and cleansers in personal care products such as toothpaste, facial scrubs, and body washes. Federal law defines “plastic microbead” as any solid particle that is “5 millimeter or less in size, and intended to be used to exfoliate or cleanse the body or any part of the body”.[2]


Why are Microbeads a Problem?

Due to their small size, low density (they float) and lack of biodegradability, microbeads are not removed by sewage treatment plants. They therefore can easily end up in the ocean, contributing to plastic pollution that is accumulating in oceanic gyres. 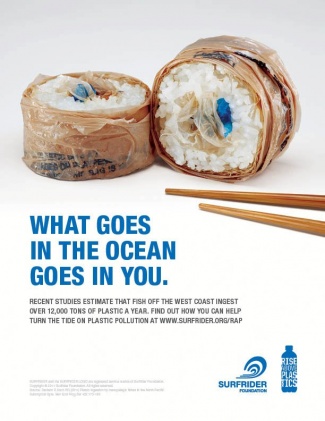 Microbeads are about the same size as fish eggs, which means that, they can look like food. They also accumulate toxins such as PCBs and pesticides that prefer to stick to plastic when it’s around (this is called ‘adsorbing’) (source). The pollutants are also concentrated in this way. If fish eat microbeads, which can adsorb toxins, those chemicals could be passed up the food chain to wildlife and humans.

In 2012, Sherri Mason, an associate professor of chemistry at the State University of New York, collaborated with researchers at the Five Gyres Institute to collect data on the prevalence of plastics in the Great Lakes. Their research found high numbers of plastic microbeads in samples from Lake Erie and other Great Lakes, in some cases numbering more than 450,000 particles per square kilometer. In analyzing facial cleansers, they estimated that a single tube of product can contain over 300,000 of these beads. As mentioned above, they are too small to be removed by most municipal wastewater treatment plants, and can wash directly into rivers, lakes and the ocean.

The good news: this is a solvable issue. Natural alternatives such as apricot kernel shells and jojoba beads are commonly used by many brands. A growing grassroots public awareness campaign is beginning to convince industry to end the use of micro-plastics in consumer products worldwide and switch to available alternatives. An article published in Environmental Science and Technology in September 2015 authored by eight researchers representing seven different academic and environmental organizations concluded:

The probability of risk from microbead pollution is high while the solution to this problem is simple. Banning microbeads from products that enter wastewater will ultimately protect water quality, wildlife, and resources used by people. 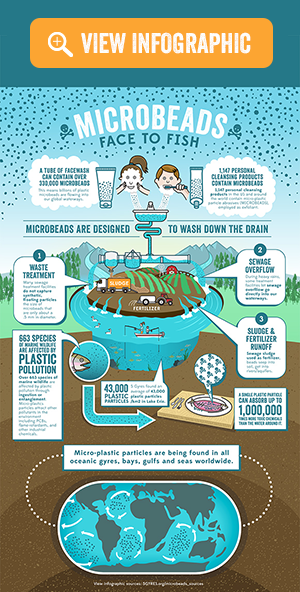 With more than eight states passing their own microbead bans, federal legislation was desired by numerous stakeholders to establish uniform standards. On December 18, 2015, Congress amended the Federal Food, Drug and Cosmetic Act (FD&C Act) by passing the Microbead-Free Waters Act of 2015.

Representatives Frank Pallone (D-NJ) and Fred Upton (R-MI) led a strong bipartisan effort to pass the microbeads bill in the House of Representatives. The Surfrider Foundation supported the bill in concept and asked for the strongest language possible to ensure that the tide of microbead pollution is truly stopped when the legislation goes into effect. We were able to secure a bill with definitions essentially on par with the strong California bill and ensure that there was no loophole for so-called “biodegradable” plastic microbeads, as is found in some weaker state legislation. While the current version of the bill does allow for preemption, it would preempt (or override) the handful of weaker state bills that have already passed, and it has a quicker timeline than even the California legislation (which becomes effective in 2020), beginning to go into effect in 2017. Also, any future legislation to add state enforcement mechanisms to the current federal enforcement scheme would not be preempted by this bill. H.R. 1321 passed the House Floor on December 7, 2015.

The Senate version of the Microbead-Free Waters Act (S. 1424) is sponsored by Senator Kirsten Gillibrand from New York. The bill prohibits the manufacture of microbeads in rinse-off cosmetics as of January 1, 2018. Surfrider expects the Senate version will be amended to become more in line with the House version of the bill, which prohibits the use of microbeads in toothpaste, cosmetics, and almost all soaps. Because of the strong support for this bill, it was expected to move through the Senate quickly and on to the President’s desk.

Update: The bill was approved by both the House and Senate and was signed into law by President Obama in December 2015!

Illinois became the first U.S. state to enact legislation banning the manufacture and sale of products containing microbeads; the two-part ban goes into effect in 2018 and 2019. As of late March 2015 additional legislation was under consideration in several other states. Here's an update (5/29/15) on federal and state legislation.

However, not all legislation to eliminate the use of plastic microbeads in personal care products is created equal. Some proposed bills have been heavily influenced by industry, and contain loopholes which may thwart efforts to prohibit microplastics. These loopholes include: definitions of “microbeads” which exempt “biodegradable” particles (which is vague, and could create a loophole for “biodegradable” plastic, despite lack of adequate testing and evidence of true biodegradability); deadline extensions for over the counter products; problematic and narrow definitions of “plastic,” and exemptions for prescription drugs. Therefore, while Surfrider Foundation supports the prohibition of microbeads, we want to ensure that legislastion will truly address the problem.

The apparent best case scenario is passage of California AB 888-like bills, which do not contain the biodegradable language/loophole, prescription drug exception, or OTC deadline extensions; and which do not contain a problematic definition of plastic. Instead, for example, these prohibit the sale/offer of personal care products with plastic microbeads, with an exception for products containing “natural exfoliants” that do not contain plastic microbeads. “Natural exfoliant” means a substance occurring in and generated by the natural environment and includes, but is not limited to the following substances: walnut shells, apricot hulls, sand, clay, or beeswax.
Update: In September 2015 the California Legislature passed AB 888!

Next best appears to be Minnesota SF 674-like bills, which do not contain the biodegradable language/loophole, and instead put the burden on a person seeking an exemption to show by clear and convincing evidence that the microbeads completely break down within two weeks in a natural aquatic environment. This puts the burden on industry, instead of allowing for a “biodegradable” exemption, without sufficient testing or evidence of actual biodegradability. Although this bill still contains a prescription drug exception, OTC deadline extension, and problematic definition of plastic, it still may be an acceptable compromise.

Our friends at The Story of Stuff have put together a great video on microbeads. Check it out!