Much of the following discussion of sand mining is taken from the Coastal Care website.

The world’s beaches are being mined for sand for a variety of uses (aggregate in concrete, fill, beach renourishment). The practice is often very destructive and poorly managed (or unmanaged). This is a global phenomenon (Morocco, Caribbean Islands, India, South Africa and more). This theft of beach and dune sand is a direct cause of erosion along many shorelines. It is very damaging to the beach fauna and flora, ruinous to beach aesthetics, and frequently causes environmental damage to other coastal ecosystems associated with the beach such as wetlands. 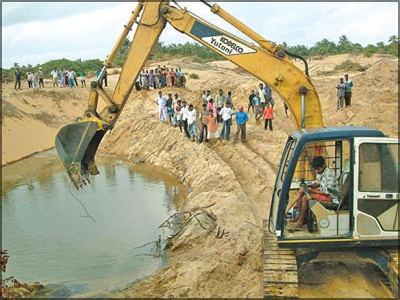 Another major impact of beach sand mining is the loss of protection from storms surges associated with tropical cyclones and tsunamis. Some communities affected by the 2004 tsunami in the Indian Ocean had higher storm surges probably due to beach sand mining resulting in fatalities. Sometimes it is difficult to tell that a beach has been mined. Sand extraction becomes difficult to recognize as the beach readjusts to a new profile after a few storms. But historic accounts of beaches in the Caribbean often reveal that beaches have been narrowed considerably. Mining is particularly senseless in a time of rising sea level when sand is sorely needed as a storm energy buffer.

Although the term sand mining is usually used to refer to removal of sand from beach or inland sources, it is also sometimes used to refer to the offshore dredging of sand from the ocean floor as a source of sand for beach fill projects. In the United States, dredging offshore areas for sand is generally permitted on a project-by-project basis. Massachusetts is the only state on the east coast that bans offshore sand mining. But the 2015 Ocean Management Plan (OMP), compiled by the Massachusetts Office of Coastal Zone Management (CZM), proposes the formation of up to nine offshore sand mining pilot projects. More on this.

Sand mining has recently been in the news in several coastal states including Florida (1, 2) and California (1, 2). The situation in southern Monterey Bay in California is particularly egregious because the company CEMEX is believed to mine approximately 270,000 cubic yards of sand a year (and perhaps more), from the beach. CEMEX’s operations are suspected to be a primary cause of beach and dune erosion in southern Monterey Bay. CEMEX is believed to be the cause of major erosion at regional public beaches such as the Marina Dunes Preserve, Fort Ord Dunes State Park, and Monterey State Beach.

An article Why Sand Is Disappearing was published in the NY Times on November 4, 2014. It concludes:

"So we need better conservation plans for shore and coastal areas. Beach replenishment — the mining and trucking and dredging of sand to meet tourist expectations — must be evaluated on a case-by-case basis, with environmental considerations taking top priority. Only this will ensure that the story of the earth will still have subsequent chapters told in grains of sand."

Sand mining and the growing shortage of easily-accessible sources of sand are the focus of the 2013 documentary film Sand Wars. Watch the trailer.

Here's another video on the issue by Tom Scott: