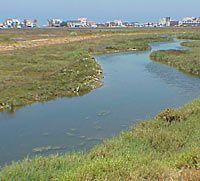 Most of us have seen coastal wetlands, perhaps adjacent to surfing areas that we frequent, but how much do we know about and appreciate the multifaceted ways in which they benefit people, animals, and the overall environmental health of our planet?

First, some definitions are in order. Wetlands are areas where water covers the soil, or is present at or near the surface of the soil all year or for varying periods of time during the year. Coastal Wetlands are found along the Atlantic, Pacific, Alaskan, and Gulf coasts. They are closely linked to our nation's estuaries (an inlet or arm of the sea; especially the wide mouth of a river where it meets the sea), where sea water mixes with fresh water to form an environment of varying salinities. Some tidal freshwater wetlands form beyond the upper edges of tidal salt marshes where the influence of salt water ends. Another related word is watershed. A watershed, also called a drainage basin, is the area in which all water, sediments, and dissolved materials flow or drain from the land into a common river, lake, ocean, or other body of water.

Over half of the wetlands in the contiguous 48 states were lost between the late 1700s and the mid-1980s. The percentage loss of wetlands is even higher in California and other densely populated coastal areas. Our remaining wetlands face continuing threats from development, pollution, and blockage or re-routing of their sources of water. Although there have been many attempts to mitigate wetland loss by restoring wetlands or trying to construct new wetlands, these areas are rarely as productive as the ones they are designed to replace.

Wetlands provide many benefits to the environment and to society. They provide values no other ecosystem can. They are among the most productive ecosystems in the world, comparable to rainforests and coral reefs. Tragically, all three of these types of ecosystems are disappearing at an alarming rate. Some of the many benefits of wetlands are discussed below.

Wetlands are enjoyable to look at. What would you rather see across the street from the beach, egrets and other birds in a beautiful, peaceful wetlands area, or a sea of condominiums with the associated noise, traffic and pollution? This is precisely the choice we're facing at areas like Bolsa Chica and Playa Vista in Southern California and at many other locations along our coasts. Wetlands have significant recreational, historical, scientific, and cultural values. More than half of all U.S. adults hunt, fish, watch birds or photograph wildlife. Painters capture the beauty of wetlands on canvas. Others appreciate these wonderlands with their varied, fascinating lifeforms through hiking, boating, and other recreational activities.

Wetlands can be thought of as "biological supermarkets." They provide great volumes of food that attract many animal species. These animals use wetlands for part or all of their life cycle. Dead plant leaves and stems break down in the water to form small particles of organic material called "detritus." This enriched material feeds many aquatic insects, shellfish, and small fish that are food for larger predatory fish, reptiles, amphibians, birds, and mammals. Many species of birds and mammals rely on wetlands for food, water, and shelter, especially during migration and breeding. The U.S. Fish and Wildlife Service estimates that up to 43% of threatened and endangered species rely directly or indirectly on wetlands for their survival.

Wetlands' microbes, plants, and wildlife are part of global cycles for water, nitrogen, and sulfur. Wetlands also store carbon within their plants and soil instead of releasing it to the atmosphere as carbon dioxide, thus helping to counteract global warming.

Natural products from wetlands include fish and shellfish, berries, wood, wild rice, and medicines derived from wetland soils and plants. Many of the nation's fishing and shellfishing industries harvest wetland-dependent species. In Louisiana alone, the coastal marshes produce an annual fish and shellfish harvest that amounted to 1.2 billion pounds worth $244 million in 1991. Wetlands are also habitats for fur-bearing animals whose pelts are worth many millions annually.

Wetlands work like natural sponges to trap and slowly release surface water, rain, snowmelt, groundwater, and flood waters. Wetland vegetation also slows the speed of flood waters and distributes them more slowly over the floodplain. This combined water storage and breaking action lowers flood heights and reduces erosion. Wetlands within urban areas are particularly valuable, partly counteracting the greatly increased rate and volume of surface-water runoff from pavement and buildings. Doesn't it seem like we hear more and more about flooding along the Mississippi River? Well, the wetlands along the Mississippi once stored at least 60 days of floodwater. Now they store only 12 days because most have been filled or drained.

Wetlands have important filtering capabilities for intercepting surface-water runoff from higher dry land (and pavement) before the runoff reaches open water. As the runoff water passes through, the wetlands retain excess nutrients and some pollutants, and reduce sediment that would clog waterways and affect fish and amphibian egg development. Water filtering by wetlands saves us a lot of money. A 1990 study showed that the Congaree Bottomland Hardwood Swamp in South Carolina naturally performs the functions of a $5 million wastewater treatment plant. In fact, wetlands have been constructed in several locations in California, South Carolina, Oregon, Florida, Alabama, and Mississippi to cost-effectively treat municipal wastewater by taking the place of traditional mechanical "secondary treatment" processes. These wetlands provide some of the benefits of natural wetlands while also treating wastewater.

We need to be careful not to depend too heavily on wetlands to treat our runoff, however. Polluted runoff can damage wetlands. Impacts to wetlands have resulted in consequences such as changed species composition, increased pollutant loadings, and replacement of complex wetland systems with less desired open water. In the worst cases, such as at the Kesterson Wildlife Refuge in California, contaminated runoff has resulted in dead and deformed fish and migratory birds.

Is your beach eroding? Wetlands restoration could be part of the solution. The ability of wetlands to control erosion is so valuable that some states are restoring coastal wetlands to buffer the storm surges from hurricanes and tropical storms. Wetlands at the edges of lakes, rivers, bays, and the ocean protect shorelines and stream banks against erosion. Wetland plants hold the soil in place with their roots, absorb the energy of the waves, and break up the flow of stream or river currents.

So, take the time to turn around from looking at the waves to notice the wetland areas along our coasts. They are as important a natural resource as our beaches and waves. Our coastal and global ecosystems depend on wetlands to function properly.

Much of the information in this article was taken from the EPA's excellent website on wetlands.

UPDATE (October 2005): EPA has published a comprehensive and useful guidance document National Management Measures to Protect and Restore Wetlands and Riparian Areas for the Abatement of Nonpoint Source Pollution (EPA 841-B-05-003, July 2005). This guidance document describes practices to reduce NPS pollution of surface waters and ground water through the protection and restoration of wetlands and riparian areas, as well as the implementation of vegetated treatment systems.

UPDATE (February 2014): Restore America's Estuaries released the findings of a groundbreaking study that confirms the climate mitigation benefits of restoring tidal wetland habitat in the Snohomish Estuary, located within the nation's second largest estuary: Puget Sound. The study, the first of its kind, found major climate mitigation benefits from wetland restoration and provides a much needed approach for assessing carbon fluxes for historic drained and future restored wetlands which can now be transferred and applied to other geographies. The Study, Coastal Blue Carbon Opportunity Assessment for Snohomish Estuary: The Climate Benefits of Estuary Restoration found that currently planned and in-construction restoration projects in the Snohomish estuary will result in at least 2.55 million tons of CO2 sequestered from the atmosphere over the next 100-years. This is equivalent to the 1-year emissions for 500,000 average passenger cars. If plans expanded to fully restore the Snohomish estuary, the sequestration potential jumps to 8.9 million tons of CO2, or, in other terms, equal to the 1-year emissions of about 1.7 million passenger cars.

UPDATE (November 2016): The Lloyd’s Tercentenary Research Foundation released Coastal Wetlands and Flood Damage Reduction: Using Risk Industry-based Models to Assess Natural Defenses in the Northeastern USA (PDF, 3.4 MB), the first report from the two-year research project, The Role of Coastal Habitats in Managing Natural Hazards and Risk Reduction. The report quantifies the economic benefits of coastal wetlands in reducing property damage from storms and flooding in the northeastern United States. For more information on this project, see the Lloyd’s website.

UPDATE (March 2017): The Mid-Atlantic Regional Council on the Ocean (MARCO), a partnership of five Mid-Atlantic states, released a report Developing Wetland Restoration Priorities for Climate Risk Reduction and Resilience in the MARCO Region on the role of Mid-Atlantic coastal wetlands in reducing climate risk. The report examines current practices for identifying and prioritizing wetlands for their ability to reduce climate risk and enhance climate resilience in the region. The report, prepared by the Environmental Law Institute (ELI), identifies opportunities for improving how coastal wetlands can serve as climate buffers in the coastal states of New York, New Jersey, Delaware, Maryland and Virginia.


This article is part of a series on Clean Water which looks at various threats to the water quality of our oceans, and the negative impacts polluted waters can have on the environment and human health.