The town of Seabrook approved a Beach Management Plan in February 2013. The document is necessary for the town of Seabrook to perform day-to-day beach maintenance activities without requiring a wetlands permit from the New Hampshire Department of Environmental Services. State and federal agencies monitor nesting plovers that inhabit the Seabrook dunes each spring, protecting the endangered species from potential enemies in both human and animal forms. Signs are posted to keep people away from those areas, and fences are erected to further protect the nesting areas.

Horseshoe crabs have been crawling up from the ocean to lay their eggs on beaches along the Atlantic Coast for the past 445 million years.

The Division of Forests and Lands also has information describing the natural communities on New Hampshire's coastal sand dune system.

The NH Coastal Program Website has a fact sheet related to beach ecology: What is a Sand Dune?

NH Fish & Game Department's Wildlife Journal has published an article on marine debris. To read the article click on the following link: Marine Debris: A Visible Threat to Our Waterways and Shorelines Sept/Oct. 2002

A collection of reports, databases, and data layers prepared by consultants for the North Atlantic Landscape Conservation Cooperative offers a birds-eye view of sandy beach and tidal inlet habitats within the U.S. Atlantic Coast breeding range of the endangered piping plover based on imagery from Google Earth, Google Maps, state agencies, municipalities, and private organizations. By comparing the location, status, and condition of potential plover breeding grounds from Maine to North Carolina during three distinct time periods -- before Hurricane Sandy, immediately after the storm, and three years after post-storm recovery efforts -- these inventories provide a habitat baseline that can help resource managers plan for future change.

Several topics relating to Salt Marsh Ecology and Monitoring are explored in the following documents: http://des.nh.gov/organization/divisions/water/wmb/coastal/restoration/ecology/index.htm

New Hampshire has 18 miles of open-ocean coastline on the Gulf of Maine, and over 230 miles of sensitive tidal shoreline. The State's estuaries include a collection of bays, tidal rivers, and salt marsh systems. The two largest, most distinct estuaries in the New Hampshire Coastal Program (NHCP) are the Great Bay Estuary and the Hampton-Seabrook Estuary. The Great Bay Estuary covers over 17 square miles, and includes 150 miles of tidal shoreline. It is located more than five miles inland from the ocean, up the Piscataqua River.

The University of New Hampshire and the Piscataqua Region Estuaries Partnership has produced the State of the Estuaries 2013 report that explains the status and trends of environmental conditions in the estuaries. There are 14 indicators that aid in understanding the health and condition in the estuaries. They provide a diverse picture of a number of key factors, integral to a healthy and productive system. The indicators include dissolved inorganic nitrogen concentrations, microalgae, dissolved oxygen levels, eelgrass, oyster populations, and bacterial contamination. Data indicate a long-term decline in eelgrass since 1996 that is not related to wasting disease. Due to variability even recent gains of new eelgrass still indicate an overall declining trend. 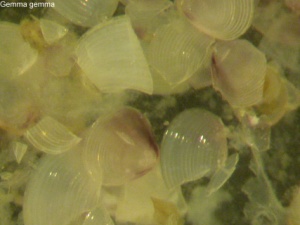 The estuaries are nursery areas for commercially important fish and shellfish including lobsters, winter flounder, cod, pollock, eels, and hake. New Hampshire's estuarine waters support 95 species of phytoplankton, 169 species of seaweeds, and numerous beds of eelgrass. Eelgrass is particularly important as a filter for suspended sediment and dissolved nutrients, and for its roles in the life cycles of scallops, crabs, finfish, and waterfowl. The estuaries also sustain runs of shad, alewives, and lampreys, which travel from the ocean through the estuaries to reproduce in the freshwater tributaries. The estuaries host runs of smelt to their spawning grounds at the heads-of-tide. Two-thirds of New Hampshire's commercially harvested fish, including herring and smelt, rely on the estuaries at some point in their life cycle. The small bivalve Gemma gemma is the most abundant mollusk in the Great Bay estuarine system, and the estuary contains large oyster beds, which are harvested recreationally. Oysters in the Great Bay have declined in recent years. From 1991 to 1996 oyster density reductions in three beds of recreational importance ranged from 42 percent to 69 percent. In particular, oyster beds in the Oyster and Bellamy rivers have declined in acreage. The total harvest of oysters had declined from 5,000 bushels to 1,000 bushels of oysters between 1991 and 1997, due largely to predation, limited substrate suitable for larval attachment, disease, and a variety of management issues. 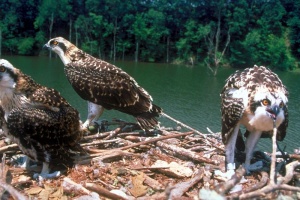 New Hampshire's estuaries and associated uplands also provide significant breeding, feeding, and overwintering habitat for many species of birds, from bald eagles and nesting osprey to marsh wrens. Thirteen state-listed threatened or endangered birds occur in the watershed. In 2000, the Audubon Society of New Hampshire and the New Hampshire Fish and Game Department charted their second best breeding season for Ospreys in New Hampshire on record, with a total of 40 young Ospreys fledged from 24 active nests. Productive nests were distributed across the state, with four around Great Bay. Common terns have nested on Nannie Island and the Footman Islands, as well as on several islands in Little Bay. The Wilcox Point shoreline is critical to the wintering of the American bald eagle. It supports the largest winter population of bald eagles in New England and is one of the best documented wintering sites for these birds in the region. The State's coastal watershed also provides important stopover habitat for migratory birds and bats using the Atlantic flyway. The Great Bay and Hampton-Seabrook estuaries provide important migration and wintering habitat for 20 species of waterfowl, 27 species of shorebirds, and 13 species of wading birds, including the following endangered species: Northern harriers, Sedge wrens, and Henslow's sparrows. The Seacoast is New Hampshire's primary waterfowl wintering area, with Great Bay supporting about 75 percent of the overwintering population.[1]

The NH Coastal Program Website contains links to several fact sheets related to coastal ecology. Among these are:

The Gulf of Maine Council on the Marine Environment is one of many organizations working toward a coordinated, regional program to monitor marine and estuarine habitats in the Gulf of Maine.

The Gulf of Maine Council's Habitat Monitoring Subcommittee and its partners have developed standard methods for regional salt marsh monitoring that offer the potential for a cohesive, comprehensive view of salt marsh conditions. Adoption of these standards by existing monitoring programs around the Gulf of Maine could provide the basis for an extensive regional monitoring network.

As part of this effort, the Subcommittee released Salt Marshes of the Gulf of Maine: Long-term monitoring to assess human impacts and ecological condition in September 2005. Partners in publication development and production were Laudholm Trust, University of New Hampshire, and U.S. Geological Survey. Click here for the interactive mapping tool.

The Gulf of Maine Habitat Classification Workshop: Mapping for Decision Making was held in September 2008 to facilitate communication on seafloor mapping and classification and to determine the need for information about marine habitats. See the workshop proceedings.