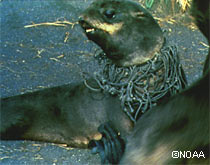 The following discussion was adapted from marine debris information appearing on the website of the California Coastal Commission. Marine Debris might also be called "Plastic Trash" as this more accurately describes the nature of the majority of the material.

Millions of Americans enjoy the nation's coastline and waterways everyday. However, many of those people are unaware how their daily activities, from driving a car, to not properly disposing of their garbage, or even throwing a cigarette butt on the ground, can impact the plants and animals off our shores. This debris can harm or kill beach organisms. Pollution also makes using the beach less enjoyable for humans and can result in illnesses in swimmers, surfers and other ocean enthusiasts. Solving our water pollution problems requires everyone's involvement.


How Does Trash Become Marine Debris? 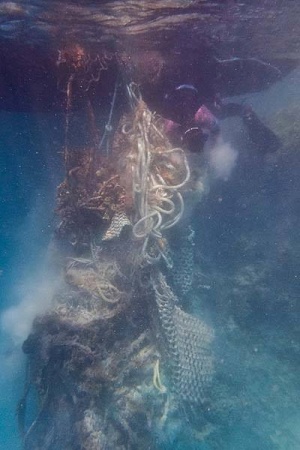 Look around the next time you walk down the street. When it rains, trash on sidewalks and streets accumulates in the gutter and is swept into your city's storm drain system. Most storm drain systems discharge directly into the nearest waterway, which eventually flows to the ocean. Trash may also be dumped directly into the ocean by recreational and commercial boaters, and it is often left on the beach by beach-goers. 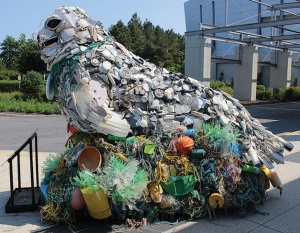 Outside the Virginia Aquarium in Virginia Beach, “Lilia” the harbor seal greets visitors to the “Washed Ashore” exhibit inside. Floating on a her own patch of plastic waste, Lilia was created entirely from plastics recovered from beaches. (Leslie Middleton, www.bayjournal.com)

We love our coast and ocean - nine out of ten Californians will visit the beach at least once this year and the statistics are similar in most other coastal states. When people arrive at the beach, they are finding a lot more than sand and surf. During a recent summer, Orange County, California collected enough garbage from six miles of beach to fill ten garbage trucks full of trash every week, at a cost to taxpayers of $350,000. Some counties spend even more.

Maine debris can also have considerable economic costs to residents who use their local beaches. A study conducted by NOAA found that Orange County, California residents lose millions of dollars each year avoiding littered, local beaches in favor of choosing cleaner beaches that are farther away and may cost more to reach. Reducing marine debris even by 25 percent at beaches in and near Orange County could benefit residents roughly $32 million during three months in the summer. The study also estimated how various changes to marine debris levels could influence economic losses to this area. For example, reducing marine debris by 75 percent from six beaches near the outflow of the Los Angeles River would benefit users of those beaches $5 per trip and increase visitation by 43 percent, for a total of $53 million in benefits. Read more and download the study.

In 1975, the National Academy of Sciences estimated that ocean-based sources, such as cargo ships and cruise liners, dumped 14 billion pounds of garbage into the ocean. In 1988, the U.S. signed onto MARPOL Annex V, joining 64 other countries that signed the international protocol that regulates ocean dumping and made it illegal to dump plastic into the ocean. Laws like MARPOL have helped to reduce the amount of trash on our beaches and in our ocean. Even so, plastic pollution is still a major problem. A recent study found an average of 334,271 pieces of plastic per square mile in the North Pacific Central Gyre, which serves as a natural eddy system to concentrate material.[1] Learn more about this at Algalita.org and 5 Gyres.

Analysis of more than 10 years of volunteer beach cleanup data indicates that 60 to 80 percent of beach debris comes from land-based sources. And debris in the marine environment means hazards for animals and humans. Plastic marine debris affects at least 267 species worldwide, including 86 percent of all sea turtle species, 44 percent of all sea bird species, and 43 percent of marine mammal species. [2]

Through a 2012 contract with the U.S. Environmental Protection Agency, Kier Associates quantified the cost spent by 90 cities in California, Oregon and Washington located along the coast or in watersheds draining to the ocean, to clean up litter and prevent trash from entering the ocean or waterways leading to it. The study found that these West Coast communities, regardless of their size, spend an annual average $13 per resident to control litter and reduce marine debris. Nearly fifty million people live in these three states and over 85 percent of them live on the ocean or along rivers leading to it. West Coast communities are, therefore, spending more than $520,000,000 a year to combat litter and prevent marine debris. This public cost burden makes a compelling argument for accelerating the search for effective strategies to reduce and prevent trash streams that enter our waterways and contribute to marine debris.

NRDC has reported similar numbers, again citing data from a study conducted by Kier Associates. According to that study, California cities, towns, and taxpayers are shouldering $428 million per year in costs to stop litter from becoming pollution that harms the environment, tourism and other economic activity.

Common items like fishing line, strapping bands and six-pack rings can hamper the mobility of marine animals. Once entangled, animals have trouble eating, breathing or swimming, all of which can have fatal results. Plastics take hundreds of years to break down and may continue to trap and kill animals year after year.

Birds, fish and mammals often mistake plastic for food. Some birds even feed it to their young. With plastic filling their stomachs, animals have a false feeling of being full, and may die of starvation. Sea turtles mistake plastic bags for jellyfish, one of their favorite foods. Even gray whales have been found dead with plastic bags and sheeting in their stomachs. Almost 90 percent of floating marine debris is plastic. Due to its durability, buoyancy, and ability to absorb and concentrate toxins present in the ocean, plastic is especially harmful to marine life.

One type of plastic debris found all over the world are plastic pellets, or "nurdles," which are the raw material transported to plastics manufacturing facilities to be melted into products such as disposable forks and bottles, computer monitors, toys, etc. To learn about (and perhaps participate in) a study of these pellets' accumulation of organic pollutants from sea water, visit International Pellet Watch.

The accumulation of marine debris can alter and degrade marine habitats through physical damage caused by abrasion, shearing, or smothering, and can change the physical and chemical composition of sediments. Physical damage often impairs critical nurseries and refuges used by many different organisms that occupy these habitats and may reduce the quality of habitat for organisms whose daily activities (e.g., feeding, reproduction) require the use of specific environments. Degraded marine habitats reduce the resilience of marine life and their ability to survive in open waters and on the ocean floor. In addition, changes in marine habitats can alter complex marine ecosystems and ultimately affect yields of important commercial fisheries resources

Beachgoers can cut themselves on glass and metal left on the beach. Marine debris also endangers the safety and livelihood of fishermen and recreational boaters. Nets and monofilament fishing line can obstruct propellers and plastic sheeting and bags can block cooling intakes. Such damage is hazardous and costly in terms of repair and lost fishing time. In one Oregon port, a survey revealed that 58 percent of fishermen had experienced equipment damage due to marine debris. Their average repair cost was $2,725.


How Does Reducing, Reusing, and Recycling Help?

Use Less Stuff! Many of our pollution problems are really problems of misplaced resources. For every item we recycle or reuse, that's one less piece of trash that can become a part of the marine debris cycle threatening people and wildlife.

Everything we use in our daily lives is made from natural resources such as trees, petroleum, sand, water, soil, and metals, many of which are non-renewable.

By throwing these materials into our landfills, we drastically reduce the remaining supply of non-renewable natural resources.


Be Part of the Solution 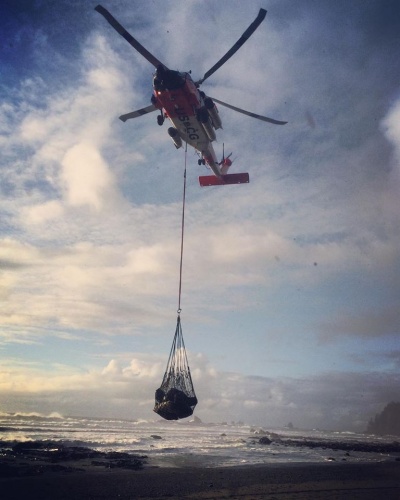 The debris that we collect from our beaches is a symptom of a much larger water pollution problem that is caused by everyday people doing everyday things. Rain scours oil from parking lots, fertilizer from lawns, pet droppings from sidewalks and other contaminants from "nonpoint" sources and transports this toxic stew down storm drains and over land into the ocean. These toxins are poisoning marine life and our water sources. We can all be part of the solution by recycling used motor oil and repairing car leaks, picking up after our pets and switching to non-toxic products and improve other everyday practices to help keep our waterways clear and clean.

In July 2013 the West Coast Governors' Alliance on Ocean Health, Marine Debris Action Coordination Team (ACT) released their Marine Debris Strategy. The Strategy includes a toolbox of key actions that may be implemented collaboratively or individually on a West Coast-wide basis: assessing baseline conditions for marine debris; setting measurable targets for improvements; establishing a database to ascertain baseline and future marine debris quantities and activities; monitoring progress; encouraging research to identify problems and potential solutions; implementing cost-effective methods for removal; and promoting stewardship through education in all aspects of marine debris prevention, reduction, and removal activities. The ACT is also in the final stages of releasing a Marine Debris Database that compiles data from cleanup events and derelict fishing gear removal in order to estimate a baseline of marine debris on the West Coast.

Nationally, NOAA's Marine Debris Monitoring and Assessment Project, or MDMAP, is a citizen science initiative that engages NOAA partners and volunteers across the nation to survey and record the amount and types of marine debris on shorelines. Each passionate and dedicated partner in the MDMAP network selects a nearby shoreline monitoring site that they return to monthly to conduct surveys and submit meaningful data to NOAA’s MDMAP Database.


Other Ways to Help

Discover the dramatic consequences of marine litter on the environment and its species in this great ten minute video from Surfrider Europe:

Watch this 4-minute animated video to see the impacts of marine debris. The impacts are real!

Marine debris site from National Oceanic and Atmospheric Administration (NOAA). NOAA's Marine Debris Program and the Southeast Atlantic Marine Debris Initiative (SEA-MDI), run out of the University of Georgia College of Engineering have jointly developed a Marine Debris Tracker mobile application. NOAA's Marine Debris website also has Ten Things You Should Know About Marine Debris and a Blog which has articles like Not Just Hot Air: Celebrate July 4 Without Balloon Releases.

Earth 911: Provides information on where to recycle and how to dispose of household hazardous waste, as well as details on local environmental events. (800) CLEAN-UP