Plastic bottles were first available commercially in the years after World War II. The costs were relatively expensive and the United States was doing just fine with the milkman delivering in glass bottles and sodas available in returnable glass bottles. In the 1960s the cost of manufacturing plastics dropped sharply and production increased as the industry expanded. Plastic bottles have many advantages such as being lightweight, cheap, easy to shape and hard to break. Plastic bottles also have two big drawbacks in potentially harming or killing wildlife when littered and the fact that recycling has not reached its potential, so many plastic bottles are littered or landfilled.

From the 1970s through the 1990s it seemed every liquid product became available in a plastic bottle or container. The most ubiquitous plastic bottled item is water. Seemingly non-existent in the 1970s, the U.S. was buying half a billion bottles of water a week that cost 2000 times more than tap water by 2010. In 2015, 49.4 billion plastic water bottles were sold in the United States. The recycling rate for plastic bottles was only 31.1% which translates to roughly 34 billion plastic bottles that were littered or went into a landfill in 2015.[1] For a full overview of this manufactured demand check out The Story of Bottled Water.

In 2006, fewer than 25% of all plastic bottles were recycled nationwide and 3.36 million tons were landfilled or littered in the U.S. alone. Littered plastic bottles can make their way through watersheds and accumulate in local waterways, or possibly take a journey to one of the five ocean gyres such as the the one that holds the Pacific Garbage Patch. The ocean is slowly turning into a plastic soup and an element of that soup is plastic bottles. Marine life is mistaking plastic debris for food at alarming rates. An estimated 100,000 marine mammals and up to 1 million sea birds die every year after ingesting or being tangled in plastic marine litter. 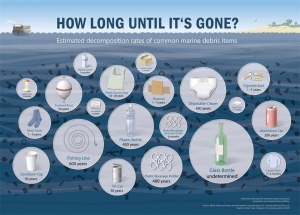 A huge problem with plastic bottles and other plastic materials is that they can take decades or even centuries to degrade. Essentially, they're with us in the environment forever. Some plastics manufacturers claim their products are biodegradable, but testing and real world experience has yet to bear this out. 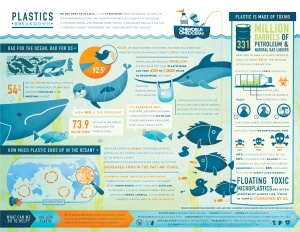 Also see the infographic from our friends at One World One Ocean illustrating the harm plastic bottles and other plastic materials inflict on the ocean.

Recycling is a step in the right direction but has not come close to reaching its full potential. Currently, only ten States have a ‘bottle bill’ or redemption fee for beverage containers. Those states with a bottle bill have a dramatically higher recycling rate and were responsible for almost half of the total beverage container recycling in 2006 according to www.bottlebill.org

The best solution is to take back the tap and utilize reusable bottles. Tap water is more regulated than bottled water and if you don’t like the taste, try a filter. If fizzy drinks are needed, there are great home soda makers on the market to reduce plastic, save money and fit your needs.

Alison Teal shows us what conditions look like on some islands in The Maldives and what the future may hold for us if we don't Refuse, Reduce, Reuse and Recycle.