BEACH Act
The Beaches Environmental Assessment and Coastal Health Act (BEACH Act) signed into law on October 10, 2000, amends the federal Clean Water Act (CWA), incorporating provisions intended to reduce the risk of illness to users of the Nation's recreational waters. The BEACH Act authorizes the U.S. Environmental Protection Agency (EPA) to award program development and implementation grants to eligible States, Territories, Tribes, and local governments to support microbiological testing and monitoring of coastal recreation waters, including the Great Lakes, that are adjacent to beaches or similar points of access used by the public. BEACH Act grants also provide support for development and implementation of programs to notify the public of the potential exposure to disease-causing microorganisms in coastal recreation waters. EPA encourages coastal States and Territories to apply for BEACH Act Grants for Program Implementation (referred to as Implementation Grants) to implement effective and comprehensive coastal recreation water monitoring and public notification programs. CWA section 406(i) authorizes appropriations of up to $30 million per year to develop and implement beach programs. Unfortunately, only about one-third that amount has been authorized each year since the program's inception. In recent years, the total funding available for BEACH Act grants has been about $9.5 million. Funding beyond 2012 has been in jeopardy, since EPA's budget requests for this program in FY2013 and FY2014 were ZERO (money for testing in 2013 and 2014 was ultimately allocated as part of Continuing Resolutions to resolve the Federal Budget impasse) and there was also no money for beach testing in the FY2015 budget. Again, it was restored at the last minute as part of a Continuing Resolution. It is very discouraging to have to fight for this basic funding to protect the public's health at the beach every year. Thankfully, there is a growing movement to provide stable funding. Unfortunately, in 2017 the situation is even more dire. If available, funds are allocated to the states and territories based on a formula which uses three factors that are readily available and verifiable: (1) Length of beach season, (2) miles of beach and (3) number of people that use the beaches. Alabama was eligible for a $251,000 grant in fiscal year 2016.

Coastal Alabama Beach Monitoring and Public Notification Program was the subject of a presentation by Mark Ornelas of ADEM on February 25, 2010.

Alabama has 97 coastal beaches stretching along 50 miles of the Gulf of Mexico coast and 70 miles of bay and island shoreline. The Alabama Department of Environmental Management (ADEM) administers the state's beach water quality monitoring program. The majority of testing occurs during the May–September swim season, with some additional monitoring occurring during the cooler months. ADEM posts beach advisory data on its website. 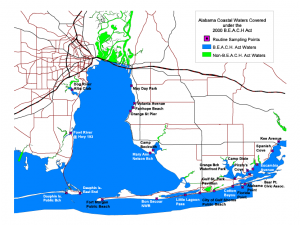 You can click here for the current status of all monitored beaches.

Swim Guide is a free app that tells you the water quality status for beaches in Mobile and Baldwin Counties. This app became available in May 2012.

For years, Fairhope citizens and city officials have debated the cause of contaminated water on the beach just north of the Fairhope Pier, where high counts of bacteria have often forced the beach to be closed. An epidemiology study by the U.S. EPA which was published in 2010, found that enterococcus bacteria exceeded the EPA threshold in 23 percent of 99 samples taken in Fairhope. In 2012, an Auburn University study found that high bacteria counts at the city's beach were associated with goose dropping and other waste. The city removed Canada geese from the municipal beach and duck pond in July 2012. Now, the city's Environmental Advisory Committee is working toward a study of inland sources of fecal-indicator bacteria in local waters. The study will focus on three runoff sources: Big Mouth Gully north of the city beach, Stack Gully on its south side and the runoff from the downtown area. Read more.

In 2013, Alabama reported 97 coastal beaches. Of all reported beach monitoring samples, 11% exceeded the Beach Action Value (BAV) of 60 enterococcus bacteria colony forming units (cfu) per 100 ml marine or estuarine water in a single sample. NRDC considers all reported samples individually (without averaging) when calculating the percent exceedance rates in this analysis. This includes duplicate samples and reported samples taken outside the official beach season, if any.

In June 2013, U.S. EPA released its latest data about beach closings and advisories for the 2012 swimming season. Note that for some states the data is incomplete, making state-to-state or year-to-year comparisons difficult. Here's EPA's BEACH Report for Alabama's 2012 Swimming Season. EPA no longer publishes this report.

No information could be found on the location of sewage outfalls along the Alabama coast.

ADEM Coastal Program rules require that certain types of NPDES wastewater discharges to the coastal waters of Alabama perform specific types of environmental monitoring. This monitoring is to occur within the immediate vicinity of the discharge, commonly referred to as "discharge information zone", and includes sampling of water, sediment and benthic macro-invertebrates. The specific requirements can be found in Administrative Code R 335-8-2-.12 and recommendations for preparing and implementing a DIZ monitoring program are included in the Water Division Permitting Guidance section.

ADEM's Coastal Watershed Survey Program utilizes a spectrum approach for assessing the condition of the small subwatersheds located in Alabama's Coastal Area. The strategy of this program is to integrate data collected from the water column, sediment and macroinvertebrate samples with information on land use, topographic characteristics, wetlands, and project growth and development, with a focus on the effect of non-point sources on these watersheds. Numerous water quality reports for subwatersheds and specific waterbodies for the period 1989 through 2008 are available.

Although not on the coast, according to the EPA there are areas in central Alabama where conventional septic systems fail regularly, due to the impermeable clayey soils of the area. Not only that, many homes have "straight pipe" (no treatment) sewer discharges. The University of Alabama conducted onsite inspections of approximately 1000 group-randomized properties in two central Alabama counties to determine how common straight pipes are among unsewered homes. Preliminary data from Wilcox County indicate that more than 60% of unsewered homes discharge raw sewage through straight pipes.

The Mobile County Health Department (MCHD) staff completed in 2009 a pilot Onsite Sewage Disposal System (OSDS) Inventory Project designed to create, define, and map GIS layers of private septic tank information that will provide an efficient sub-watershed based desktop inventory, with utility-based ground-truthed reference maps for OSDS. In addition, the MCHD scanned historical records into the web-based program enabling the department to send documents electronically to engineers, surveyors and some property owners regarding rules and maintenance of OSDS.

The Alabama Department of Public Health (Baldwin County) is continuing the practice of mailing report forms to licensed septic pumpers monthly and mailing pump-out reminder letters to homeowners. The county has significantly increased their onsite sewage disposal system database with accurate information on pump-out activities and improved monitoring and enforcements. The database contains the following information relevant to monitoring systems efficiently and effectively: pump out dates, re-inspection dates and reports, permits issued for installation of new septic tank systems; permits issued for repair or upgrade of existing systems; and GPS readings on new and existing septic tank systems. The ADPH promotes proper installation and maintenance of OSDS through various public education/outreach activities including an information booth and display at the Baldwin County Fair. The ADPH staff engages in ongoing training such as the Onsite Sewage Conference at Auburn University to learn about new technologies and onsite system maintenance. Timeframe is 2007 and ongoing.

Here are the rules and regulations and frequently asked questions for onsite sewage treatment and disposal.

For both OSDS and municipal sewer systems, "flushable" diapers can cause sewer blockages and spills. It's best to limit what is flushed down toilets to the "three p's" (pee, poop and toilet paper).

In early 2015 the city of Gulf Shores passed a litter ordinance to kick off a new litter fighting campaign on the beach. Noel Hand, the Assistant Director of Public Works in Gulf Shores said, "What's new is going to be the amount of trash cans on the beach, the frequency that they're picked up on a daily basis, and, so, we'll come and pick them up at 8:30 in the morning and at 4:30 in the afternoon and it will be done 7 days a week." Twenty new containers that include trash cans and recycling bins were placed along the main public beach. The city has also bought a building where it plans to begin recycling in May 2015. The city is also hiring four rangers to patrol the beach from Gulf State Park to Laguna Key looking for people who litter. Fines for littering can range from $100 to $500 dollars per violation, and property owners who fail to pick up trash after being warned can also be fined. Hand said, "The worst thing you can have is plastic bags. When you come bring them down to the beach, they blow out in the water and those plastic bags look like jellyfish to sea turtles." He said if sea turtles eat the bags they could be hurt or die. Read more.

NEMO Alabama is an educational program for local officials and citizens on water pollution from nonpoint sources (polluted runoff).

ACAMP is also a partner with the Alabama Gulf Coastal Convention and Visitors Bureau in the Alabama sea turtle “Share the Beach” volunteer program.

Several Educator's Guides have been produced by COSEE SE, various Sea Grant organizations and others.

EPA has compiled several NPS (Nonpoint Source) Outreach Products that are a selection of television, radio, and print products on nonpoint source pollution that have been developed by various agencies and organizations around the country. They are good examples of outreach in the mass media. Also see What You Can Do.